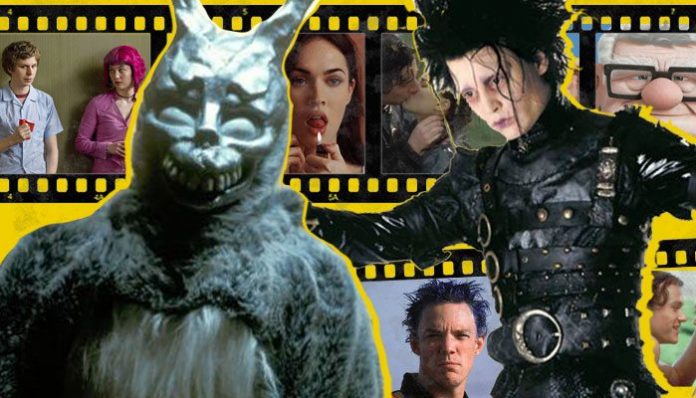 Whether you’re on a “shelter-in-place” order or you simply prefer the solitude of staying home, you’re bound to eventually run into that dreaded debate of what to watch next. While you could easily watch your favorite films over and over again, sometimes you find yourself wanting to mix things up with a new comedy or thriller. What better way to deal with quarantine than to embrace your inner emo by watching movies that speak to your dark heart? We’ve put together a list of 15 secretly emo films that you can stream right now to give yourself a good cry if you need it.

Pixar and Disney didn’t hold back when it came to hitting us right in the feels. Like a punch in the gut, they ripped open our hearts within the first few moments of the CGI animated movie Up. While the film does hold plenty of laughs, it’s definitely a great go-to when you need a good cry. So grab the tissues, open up Disney+ and get ready to wear your heart on your sleeve.

Is there any director more capable of encapsulating more emo than the famous Tim Burton? Johnny Depp plays an artificial man named Edward who, you guessed it, has scissor blades for hands. Due to his “freakish appearance,” he’s dubbed an outcast by many despite his gentle nature. And is there anything more emo than being the outcast?

Tidying up garbage, feeling alone, getting caught up in your feelings—it’s safe to say that WALL-E just might be the most emo robot out there. The computer-animated sci-fi Pixar film is considered one of the studio’s best movies to date, and with the roller coaster of emotions it will send you on, it’s easy to see why.

Celebrating the 20th anniversary of its release just last year, 10 Things I Hate About You is still one of the most iconic rom-coms of all time. Julia Stiles’ heart-wrenching delivery of the film’s unforgettable poem continues to hit us in our emo feels to this very day. It’s a timeless movie that refuses to fall into the typical teenage romance storylines while giving us all something we can relate to.

5. The Perks Of Being A Wallflower

Available on: Netflix on April 1

Based on the 1999 Stephen Chbosky novel of the same name, the film focuses on the trials, triumphs and tribulations of high school with the perfect mixtape. The Perks Of Being A Wallflower doesn’t hold back in giving us a brutally honest look at what it’s like to deal with clinical depression, bullying, sexuality and more. There’s no sugar-coating here, allowing you to experience the full range of raw emotion.

From a demonic-looking rabbit to the end of the world, Donnie Darko is an emo, psychological thriller that will have you on the edge of your seat. This film is dark, eccentric, dangerous and destructive, sending you on a dazed and blissfully unhinged ride again and again.

Everyone loves a good coming-of-age film, and there’s nothing more emo than being forced to deal with the pressures of adult life, especially when those pressures hit you before they’re supposed to. When teenager Juno MacGuff finds herself pregnant, she chooses a failed rock star and his wife to adopt her unborn child. Of course, nothing ever goes quite as planned.

Jason Segel and Jesse Eisenberg’s respective performances as author David Foster Wallace and journalist David Lipsky in the 2015 film The End Of The Tour not only show great emotional depth but bring to life a screenplay that is both insightful and heartbreaking. The film takes a look at the gritty and sometimes depressing details of a writer’s life, creating a cinematic piece that is simply a must-see.

This 2010 comedy-drama is an adaptation of the novel of the same name. The movie begins with 16-year-old Craig Gilner as he checks himself into a mental health facility and centers around life, love and the pressures of growing up. It’s a more realistic view of life in a psych ward that manages to dodge the Hollywood cliches that so often find their way into these types of films.

Deep, moving and a straightforward melodrama, SLC Punk! is the epitome of youthful rebellion and the struggle of trying to decide what you want to do with your life. If the phenomenal mid-’80s soundtrack isn’t enough to hook you, then its anthem to alternative culture certainly will.

11. Scott Pilgrim Vs. The World

Let’s be real: Ramona Flowers is an emo queen. This comic book adaptation focuses on bass player Scott Pilgrim as he finds himself battling seven of Ramona’s exes to seek victory with his dream girl. This mashup of grunge rock, quirky comedy and great production easily finds its way into our dark little emo hearts.

Garden State takes a look at what it’s like to stumble through life in a complacent fog of numbness. Combine that with estranged family and coming-of-age drama and you’ll find this film encompasses our emo feels in a multitude of ways.

Feel like bawling your eyes out for the length of an entire movie? Then If I Stay is the movie for you. Finding herself suspended between life and death, Mia Hall faces heartbreak after heartbreak while being faced with a difficult decision that has her life hanging in the balance. If you weren’t emo before starting this film, you will be afterward.

We’ve all found ourselves at the end of a relationship, overanalyzing every little detail as to what went wrong or what we could have changed to prevent such an outcome. 500 Days Of Summer puts a refreshingly honest and offbeat comedic spin on it all while showing you what it can be like to really find your passions.

Featuring a high school cheerleader (Megan Fox) possessed by a demon and turning into a boy-eating succubus thanks to a indie rock band fronted by Adam Brody, Jennifer’s Body is a horror film that’s appreciated far more today than it was during its 2009 debut. The soundtrack alone boasts Panic! At The Disco, Hayley Williams, Chris Carrabba, Cobra Starship and All Time Low. Add in a quotable script (that even inspired Halsey’s latest Manic) and lots of bloodshed, and this slasher is the perfect emo balance of dark comedy and horror.