Is there anything better than a good concept album? How about a concept series?

These multi-album narratives are few and far between. After all, they require an immense amount of thought and dedication. But we’d argue that the outcome has to be worth it.

As listeners, we love hearing these stories play out, whether they’re obvious or subtle. Read on to discover some of our favorite discography-spanning chronicles in alternative music.

Madina Lake were founded on the abstraction of Adalia, so their three-album narrative is gripping from start to finish. The brainchild of bassist Matthew Leone, the story revolves around the disappearance of Adalia from a fictional 1950s town, Madina Lake. You can hear it play out chronologically through From Them, Through Us, To You, Attics To Eden and World War III. While this storyline has ended, the band are reportedly working a new concept into their next studio album, Superbia.

Have you been perceptive enough to pick up on the repeated variances of the name “Jennifer” in the Killers‘ discography? We won’t fault you if you didn’t. This is a subtle narrative based on the 1986 murder of Jennifer Levin. Listen to “Leave The Bourbon On The Shelf,” “Midnight Show” and “Jenny Was A Friend Of Mine” in that order to hear it. The band took a Star Wars approach with this one, starting with the latter song and working backward. It was almost a four-part series, with a final song written from the perspective of Jennifer’s mother. “Where Is She?” was never formally released due to the controversial subject matter, but demos exist on YouTube.

Defeater are another group who are wholeheartedly dedicated to an overarching concept. The hardcore outfit pose an emotional narrative centralized on a family struggling for stability in the wake of World War II. The timeline can get a little murky, so we recommend starting with their first album, Travels, and working forward in order of release.

Coheed And Cambria’s The Amory Wars

The Amory Wars saga provides the backdrop for the majority of Coheed And Cambria‘s discography. The sci-fi narrative takes place in a universe known as Heaven’s Fence and chronicles persistent efforts in a war of good vs. evil. The complexity of the storyline ultimately drove the band to create a comic book for it. To hear the story in chronological order, stream the albums as follows: The Afterman: Ascension; The Afterman: Descension; Year Of The Black Rainbow; The Second Stage Turbine Blade; In Keeping Secrets Of Silent Earth: 3; Good Apollo, I’m Burning Star IV, Volume One: From Fear Through The Eyes Of Madness; No World For Tomorrow and The Unheavenly Creatures.

Manchester Orchestra frontman Andy Hull’s solo endeavor, Right Away, Great Captain!, is a fully conceptual project. Narrated over three albums, the story revolves around a sailor who goes off to sea after catching his wife in an affair with his brother. The arc follows the protagonist through a surge of anger, the throes of opiate addiction and the aftermath of his eventual revenge. The series takes place chronologically through all three albums, so start with The Bitter End for maximum effect.

This narrative comes by way of Marilyn Manson, so naturally it’s far from simple. The Triptych is composed of studio albums Antichrist Superstar, Mechanical Animals and Holy Wood. Though each record covers an individual story, the existence of a cohesive, underlying narrative has been a long-standing matter for debate among fans. From a generalized standpoint, the trilogy can be connected in themes of creation, existence and destruction. The respective chronology is reversed relative to the sequence of release, so start with Holy Wood and work back.

Read more: Top 10 concept albums worth immersing yourself in

Aaron West And The Roaring Twenties

This is another solo project in the same vein of Right Away, Great Captain! Spearheaded by the Wonder Years‘ Dan Campbell, the acoustic project follows fictional character Aaron West through his story of profound, personal loss. The story takes place over two albums, an EP and a single, “Orchard Park.” It flows sequentially with each release, so start with the debut album, We Don’t Have Each Other.

Saves The Day‘s three-part series focuses largely on abstract feelings rather than a concrete storyline. It proceeds in chronological order, kicking off with Sound The Alarm, followed by Under The Boards and concluding with Daybreak. Respectively, the albums cover generalized themes of identifying dissatisfaction, self-reflection and ultimately accepting one’s position.

Alesana‘s narrative surrounding Annabel is as trippy and complex as it is eclectic. The trilogy consists of The Emptiness, A Place Where The Sun Is Silent and Confessions. Each iteration draws on works by Edgar Allan Poe, Dante Alighieri and Madeleine L’Engle, respectively. The exact nature of the story as narrated by the albums is incredibly murky. Broadly, it depicts the protagonist’s attempts to go back in time to save his wife, Annabel. For fans seeking clarity, the band released a novella titled Annabel.

Read more: 11 collectibles that make the perfect gift for the super fan in your life

Proceed with caution if you’re not somebody who can comfortably be left hanging. After several years and 34 songs, the Smashing Pumpkins laid this project to rest prior to its completion. What exists of the highly abstract concept is based on the Fool’s Journey, with each track thought to be inspired by a different tarot card. The initial EPs, Vol. 1: Songs For A Sailor, Vol. 2: The Solstice Bare and Vol. 3, were released independently from the band’s core discography. The rest of the project can be found in Oceania and Monuments To An Elegy. 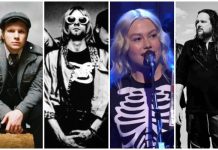