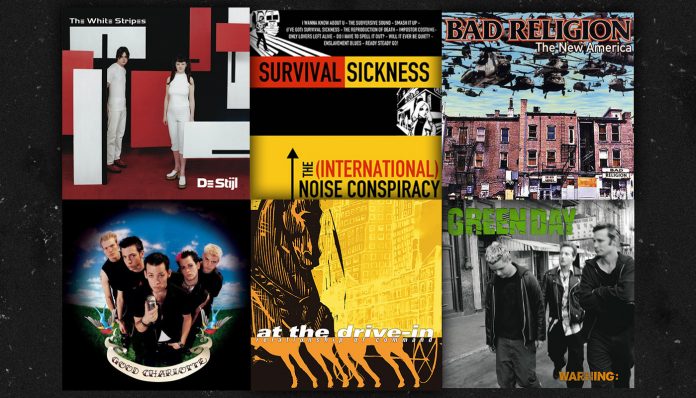 2000: The year Texas Gov. George W. Bush vanquished Bill Clinton’s Vice President Al Gore under what many contend was less-than-honest circumstances. Bush would assume the following January the seat in the Oval Office that his father George H.W. Bush occupied a decade before. The 43rd U.S. president soon blazed through Clinton’s budget surplus in six months, unbalancing the budget into a state from which it might never recover. Three months later, America was attacked on its own soil for the first time in its 225-year history.

Musically, radio and MTV was no longer dominated by punk and alternative rock. The airwaves continued to shake with pop stars a la Britney Spears, the smooth R&B of such boy bands as *NSYNC and the hip-hop-inflected nü metal of Limp Bizkit and Korn. In the margins, music’s future was being written by punk-based bands.

The framework for garage to conquer the charts was the same way grunge and punk pop had the decade before. Oh, and punk pop was about to see a second resurgence, too. More hard–rock-based strains were seeing an increasing viability, as well. Anyone despairing or celebrating punk’s ultimate mortality were fooling themselves. It always retreats underground for a time, fortifying itself for another attack on the world.

Welcome to Alternative Press’ pick of the year 2000’s best punk albums. Please enjoy our custom playlist of those LPs’ highlights as you read.

Two years after Berkeley street–punk kings Rancid released Life Won’t Wait, basically their Berkeley Calling, the band decided it was time to shake things up. They had issued three studio full-lengths in a row, crammed to the seams with their juicy Clash/ska-inflected sound. They were selling truckloads of records to the public with raw, rootsy punk. So they naturally made a hardcore album.

Their second self-titled LP was even rawer: 22 songs—most not even two minutes—in 38 minutes, 24 seconds. Every vocal was a one-note, tonsil-shredding scream, and the only melodies were Matt Freeman’s nimble bass runs. Only “Radio Havana” sounds like the Clash-damaged Rancid of yore. Then speed-bullet “Axiom” thunders in, returning the record to one-minute-plus thrashers. Probably Rancid’s least commercial record, making it one of their best.

At The Drive-In – Relationship Of Command

It arrived Sept. 12, 2000, in a sleeve loaded with Trojan War/Trojan Horse imagery. It left everyone who listened shaken to the core. Relationship Of Command felt like music had been knocked off its foundations and completely rearranged. The reality was likely more prosaic: El Paso post-hardcore unit At The Drive-In had obviously completely digested their Fugazi and Gang Of Four records and Refused’s The Shape Of Punk To Come. They threw the chunks up in all manner of novel and exciting forms. Seeing the band perform “One Armed Scissor” on Late Night With David Letterman—all flying scissor kicks and MC5-oid afros—was a sight few can forget.

“Yeah, this song is dedicated to every kid who ever got picked last in gym class,” singer Joel Madden intones in the opening moments of “Little Things,” Good Charlotte’s self-titled debut album’s first track. “To every kid who never had a date to no school dance,” continued his litany of high school outsider alienation. “To everyone who’s ever been called a freak, this is for you.”

They channeled that eternal sense of adolescent disaffection into every nook and cranny of that first album, developing a universal connection with the millions of kids who’d make Good Charlotte superstars two years later via The Young And The Hopeless and “Lifestyles Of The Rich & Famous.” They never forgot that sense of being divorced from their peers, thereafter offering sympathy and inspiration to the millions of kids going through these emotions through eternity.

On Nimrod, Green Day did not want to be typecast as the Generation X/Buzzcocks/Ramones of the ‘90s. Hence, the hints of ska, folk and surf instrumentals, as well as the acoustic weeper “Good Riddance (Time Of Your Life).” Warning wandered even further afield. There were more acoustic guitars per square inch over the sixth Green Day studio album than on your average James Taylor record. Only, an acoustic guitar in Billie Joe Armstrong’s hands is hardly an audio sleeping aid.

The most hilarious aspect of Warning was how little Armstrong could be bothered to disguise the bits he borrowed from other songs (i.e.: the title track’s resemblance to the Kinks’ “Picture Book” or the similarities between “Waiting” and Petula Clark’s “Downtown”). Still, Warning was solid, though it only sold 3.5 million worldwide. It would take the next album for Green Day to remember they were a punk band and conquer the world a second time.

Unlike most bands in thrall to vintage Hüsker Dü, Minneapolis’ Dillinger Four never thought the classic ‘80s jangle-core outfit was all heart-on-sleeve songwriting and an overdriven chorus pedal. D4 also understood that the Hüskers were capable of more aggression per pound than Motörhead in a bad mood.

Read more: How ska paved the way for punk… and took over the world along the way

Singer/bassist Patrick Costello, guitarists Erik Funk and Bill Morrisette and drummer Lane Pederson also demonstrated more wit and intelligence than any band still playing more house parties than club gigs should own. Songs such as “Who Didn’t Kill Bambi?” and “Let Them Eat Thomas Payne” proved these guys cracked open a book or two, and the judicious samples proved they learned all the right lessons from hip–hop. They should have been bigger than Guns N’ Roses.

AFI – The Art Of Drowning

Spooky-core heroes AFI’s fifth studio album was the first to bother the commercial mainstream. Although with The Art Of Drowning peaking at No. 174 on the Billboard 200 chart, the band barely tickled the overground. With their most radio-friendly production yet, all compressed sheen, guitarist Jade Puget particularly slashing within a wall of midrange fizz, the band cemented their horror/goth-punk credentials. And if the sound didn’t betray their macabre streak, titles such as “The Nephilim” and “The Lost Souls”—the latter of which sounded like labelmates the Offspring with a slasher-film makeover—should have spelled out their Hammer Studios mindset.

The “brother and sister” were in actuality married since 1996. Convinced the band was over upon their separation, Jack planned to perform a White Stripes date with nephew Ben Blackwell and friend Dave Buick. Meg showed up the day of the gig and convinced her ex-husband that the band should persevere, even if their marriage was a bust.

Hence De Stijl, named for a Dutch art movement, was recorded in Jack’s living room on 8-track analog tape. It distilled the band’s essential nature: stomping garage anthems such as “You’re Pretty Good Looking (For A Girl),” nearly ragtime acoustic numbers a la “Apple Blossom” and a snarling take on House’s immortal “Death Letter.” Jack would close his upholstery shop as De Stijl’s seemingly endless tour began. Whether they knew it or not, Jack and Meg were laying groundwork for conquering the world two years later.

“I wanna know about the books you’re reading,” former Refused singer Dennis Lyxzén sang in the opening minutes of new band the (International) Noise Conspiracy’s debut album, Survival Sickness. “I wanna know about the sound, coming from the underground,” continued that opening track, “I Wanna Know About U,” serving notice this was not going to be The Shape Of Punk To Come II.

Lyxzén seemingly formed the (I)NC almost immediately upon his post-core kingpins’ self-immolation. The quintet distinguished themselves with a MC5/Nation Of Ulysses-inspired garage-punk attack couching a running Situationist critique of society both catchy and thought-provoking. Their sound on tracks such as “Smash It Up!,” if not their politics, would certainly provide the shape of punk to come perhaps more than Refused, even.

Behold the album that catapulted Swedish garage demolitionists the Hives to world domination. Except Veni Vidi Vicious proved a slow-burning time bomb, blowing up two years down the road. The slashing Kinks-meets-DEVO riffer “Hate To Say I Told You So” took off and started a chicken run at the top of the charts with the White Stripes in 2002. The two raced neck-and-neck as garage punk began conquering extreme rock radio formats and MTV a la “Smells Like Teen Spirit” or “Longview.” But for a moment, the Hives’ matching outfits, arch sensibilities and frontman Howlin’ Pelle Almqvist’s hysterical onstage arrogance was utterly irresistible.

Most of the album was in fact drug-saturated, save breakout single “The Lost Art Of Keeping A Secret,” concerning Homme’s growing distrust of others, particularly following affairs. He should have rested easy—QOTSA were saving rock ‘n’ roll with their sand-blasted desert sound.

For their final full-length under their contract with Atlantic Records, Bad Religion worked with ‘70s musical polymath Todd Rundgren. The producer of such punk hallmarks as the New York Dolls, Patti Smith, Lords Of The New Church and Psychedelic Furs was also a childhood hero of singer Greg Graffin.

Unfortunately, the pair clashed during The New America’s recording, though Graffin claims he and Rundgren have maintained a friendship since. It was Bobby Schayer’s final Bad Religion album and the first to feature a contribution from founder Brett Gurewitz, co-writing and playing guitar on “Believe It.” The album was the first to otherwise spring from Graffin’s brow wholesale.

Rollins Band – Get Some Go Again

Following Black Flag’s acrimonious 1986 split, vocalist Henry Rollins was at loose ends. He pretty quickly formed the nucleus of what became known as Rollins Band with guitarist Chris Haskett, a friend since Rollins’ D.C. teenhood. With the lineup coalescing around the pair teamed with drummer Sim Cain and jazz/funk bassist Melvin Gibbs, Rollins Band became an alt-metal powerhouse, dominating MTV with “Low Self Opinion” and “Liar.” Their sixth album found the entire band replaced by Los Angeles hard rockers Mother Superior. Get Some Go Again was perhaps more straightforward than such LPs as Weight, possibly slightly less funky and jazzy, like hearing Rollins sing atop Jimi Hendrix and Black Sabbath outtakes. Not necessarily a bad thing.

Read more: Revisit ‘Nimrod’: The moment Green Day ripped up their own rulebook

Swedish garage hellions the Hellacopters continued fusing the spirit of Detroit’s Grande Ballroom with ‘70s arena-rock aesthetics. Their ability to make old KISS or Led Zeppelin riffs sound like MC5 outtakes was admirable, doing much to blur the divide between punk and metal. True, the genres were perhaps cousins all along, and such acts as Black Flag did much to kick over the partitions between the styles from the ‘80s onward.

Read more: A beginner’s guide to Green Day: From the big hitters to the deep cuts

The Yo-Yos – Uppers And Downers

Danny McCormack had cut an impressively Paul Simonon-like figure as bassist for pop-infused British sleaze-rockers the Wildhearts. Guitarist Tom Spencer had spent some time in a lineup of original U.K. punks the Lurkers. Recruiting drummer Andy “Bladz” Selway from Sugar Snatch, another of Spencer’s old bands, and B-Movie Heroes guitarist Neil Phillips, the Yo-Yos proceeded to liven the early ‘00s sleaze underground. Cutting an impressively Clash-like ducktails-and-black-leather greaser-punk profile, sole Sub Pop release Uppers And Downers offered a brace of sing-song rockers with big choruses that were instantly memorable. The candy-coated sheen (barely) obscured an Elvis-sneer within the ripped-denim hearts of such anthems as “Head Over Heels” and “Keepin’ On Keepin’ On.”