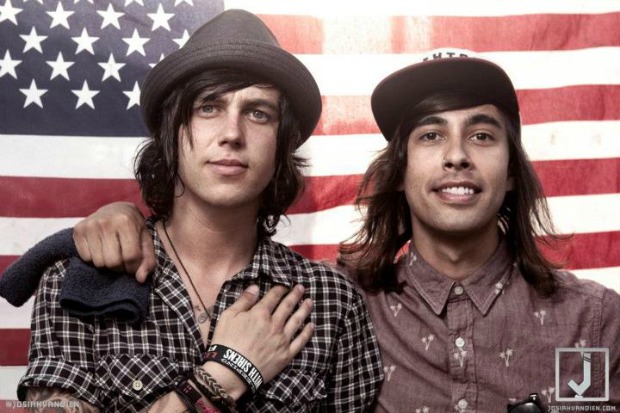 [photo credit: Josiah VanDien]
Since the dawn of rock music, bands in every subgenre have been releasing split records with their friends or teaming up to perform on the actual songs. Since all music scenes are built on the concept of like-minded community, we picked 10 collaborations (6 songs and 4 split EPs) issued this year that we think worked out great and showed not only amazing musicianship, but also fostered that spirit of unity within their respective scenes.

1. Pierce The Veil and Kellin Quinn – “King For A Day”
Dominating the Warped 2012 crowd, Vic Fuentes and Kellin Quinn’s dual attack on “King For A Day” became the scene’s anthem this summer. Fuentes and Quinn spend the song riffing back and forth through deep growls and huge melodies with voices similar enough to make each transition seamless, making for one of the best collaborations metalcore has seen.

2. All Time Low and Anthony Raneri – “So Long Soldier”
While most guest spots give their featured artist a bridge or verse to shine, “So Long Soldier” is special because the entire song features Bayside’s Anthony Raneri singing the harmony while Alex Gaskarth holds down the melody and it works. The mix sits perfectly; you can tell Raneri is there, but he compliments Gaskarth in just the right way while still having his distinct character.

3. Deadmau5 and Gerard Way – “Professional Griefers”
Coming from disparate scenes, post-emo’s finest frontman teamed up with electro’s resident wiseguy-rodent, crafting one of 2012’s best singles. Whether it’s the grimy synths or Way’s angsty lyrics (seemingly conjuring the violent cult classic film Battle Royale), both participants held up a huge middle finger to their respective subcultures and made a banger that even your grandma could get down with.

4. Mixtapes and Dan “Soupy” Campbell – “Mt. Hope”
Mixtapes are building their career with light-hearted pop-punk tunes and trying not to get too serious. But even the funnest of bands have a serious moment, and for Mixtapes, “Mt. Hope” is that very moment, found on their 2012 full-length, Even On The Worst Nights. And there’s no one better to solidify a song about things getting better than posi-punk wunderkind Soupy Campbell from the Wonder Years. “Mt. Hope” explores the need for your best friends and not getting sucked down by depression—hell, let frontman Ryan Russel tell you for himself. It made for one of the best moments of Mixtapes’ career thus far and Soupy’s gruff, but uplifting voice was just the touch it needed.

5. Affiance and Matty Mullins – “Bohemian”
Metalcore up-and-comers Affiance got a hand from Memphis May Fire frontman Matty Mullins on their new song “Bohemian.” With Affiance frontman Dennis Tvrdik’s resounding, operatic melodies and Mullins’ tight, powerful yelp, the contrast made between singers made the song feel alive, weaving through crunchy licks and a soaring chorus without ever sounding cliche—which can’t always be said for this scene.

6. I See Stars and Cassadee Pope – “The Hardest Mistakes”
While the two collaborated earlier this on “Electric Forest” from the band’s 2012 album, Digital Renegade, the remix of “The Hardest Mistakes” shows a whole new side of both artists. While I See Stars are known for their electronic tinged post-hardcore, this remix is a pop-radio-ready dance number with a prominent four-to-the-floor beat. Pope’s current stint on NBC’s The Voice is no longer the only staple of her pop sensibility–her melodies on this song are easily the catchiest of her career.

8. Converge/Napalm Death Split (Self-released)
Some split recs are so molten and filled with rage they could burn down several city blocks. This is one of those splits.
(Converge's side)

9. Citizen/Turner Split (Run For Cover)
Rising up through the same musical circles and signing to Run For Cover around the same time, it’s no surprise Citizen and Turner spent this summer together supporting the split they released this past May. The EP showcases two new songs from each band, but what shined through was not that the songs were good, but that they both stepped up their game with craftier writing and showed they had long-term potential to avoid becoming trite.

10. Touché Amoré/The Casket Lottery Split (No Sleep)
The most unexpected jam of the year goes to Touché Amoré’s cover of the Replacements’ “Unsatisfied.” But after nearly a decade off, the Casket Lottery take the opportunity to show how well they’ve aged. With this split showcasing their third new song, “White Lies,” since 2003 (as well as a cover of Beach House's “Myth”), the Casket Lottery are back with a vengeance and fit perfectly into the modern scene.