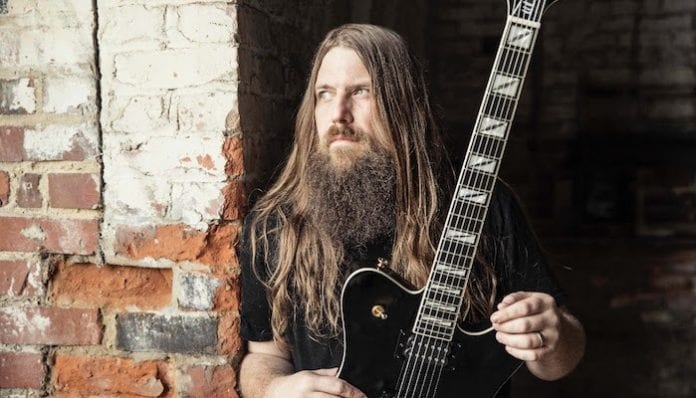 A flash of red-hot rock ’n’ roll synergy occurred in the spring of 2017. Mark Morton was in the studio with Linkin Park vocalist Chester Bennington, and the two musicians were teaming up on a song for what would become the Lamb Of God guitarist’s upcoming solo debut, Anesthetic, a kaleidoscopic collection of metal fusion that’s fronted by a dream team of various lead vocalists.

At the time, the rocker’s tease of what pointed toward a heavier-sounding showcase for Bennington—who was pivoting pop with Linkin Park—appeared to pique the interest of hard rock and metal fans. While the collaboration found in Morton’s blistering new album opener “Cross Off” fully delivers on that exciting promise of it “sounds killer,” it also stands as a bittersweet tribute to Bennington, who tragically died by suicide just a few months after the recording.

Calling to mind the session now, Morton remembers Bennington as an endearingly focused and productive songwriting partner. One who was just as stoked about the song as he was.

“He was thrilled about the idea that he was going to be back doing his more shreddy stuff,” Morton shares. “Right after we finished cutting it, he tweeted something like, ‘Who wants to hear me scream?’ He was just a fun guy to work with and really positive, really enthusiastic, really motivated and just unbelievably talented.”

Unsurprisingly, that full-throttle enthusiasm is undeniable on the finished track. Featuring a vocal tour de force from Bennington, complete with a tersely rapped outro, “Cross Off” lets Morton lay miles of fancy fretwork before a fiery guitar solo engulfs the harried narrative. Notwithstanding the darkly introspective lyrics, of course, now viewed halfway in hindsight.

Clearly, looking back on on the late Linkin Park singer’s legacy, it’d be hard to deny that Bennington helped ignite a new era of rock music. Yet it’s Morton who’s perhaps more closely associated with the “shred” of heavy metal. After all, he’s been riffing with Lamb Of God for more than two decades. But in an artistic twist similar to Linkin Park’s vacillating aesthetic, the guitarist harbors his own duplicitous musical directive: one for the thrust of metal, the other for the subtle twang of blues-based rock.

“I always write music,” Morton explains, “but I don’t always write heavy-metal music. I’m more of a rock-blues player, anyway. I love metal, and obviously I can play metal and write metal and I have a genuine love for it. I still do. But I’m also a big fan of rock and blues.”

“I love metal, and obviously I can play metal and write metal and I have a genuine love for it. I still do. But I’m also a big fan of rock and blues.”

Consequently, years’ worth of tunes Morton’s written that “obviously don’t fit into the frame of Lamb Of God” have been patiently awaiting their chance to be heard. Thankfully, LOG producer and noted metal maven Josh Wilbur (the Amity Affliction, Jonathan Davis, Trivium) was receptive to Morton’s extracurricular ideas, agreeing it was “worth developing some of these tunes,” the musician recalls. “So that’s pretty much where we started.”

But the guitarist didn’t want to make just any ol’ solo album. Letting the songs lead the way, Morton and Wilbur compiled a bucket list of artists to work on the jams, starting with their favorite vocalists. Bennington’s name was on that list, as did Papa Roach’s Jacoby Shaddix, Testament’s Chuck Billy, Alter Bridge’s Myles Kennedy and Screaming Trees’ Mark Lanegan, all of whom take a disparate turn at the mic on Anesthetic.

But that’s not all: Backing musicians on the set include such rock all-stars as Korn’s Ray Luzier, Alice In Chains’ Mike Inez and Megadeth’s Dave Ellefson.  In the outlier department, Black Crowes drummer Steve Gorman, a performer not normally associated with high-speed metal drumming, assumes the throne on a pair of groove-laden stunners.

Naturally, the arrangement of various artists on a seemingly one-off rock-metal release calls to mind classic outings such as Dave Grohl’s side project Probot or even Slash’s post-Velvet Revolver/pre-GNR reunion joint Slash, another LP staffed by an impressive array of rock singers. Morton affirms those touchstones were used as a launching pad for Anesthetic.

“Just because of the diverse styles of the material that’s included on the album, and also because it’s just fun,” he says. “To me, that’s one of the biggest takeaways I get from the experience. The enjoyment of the collaboration between all these great artists that we were able to bring together. We did take a cue from Probot, from Slash’s first solo album, where we just picked different artists to work on different songs.”

Look no further than the album’s final tune, “The Truth Is Dead,” for clear evidence of that collaborative gratification. First released last December, the all-out rager combines the familiar growl of fellow Lamb Of God frontman Randy Blythe with the diabolical range of Arch Enemy’s Alissa White-Gluz on an apathy-assaulting firebomb Morton considers  one of the two “only actual heavy-metal songs” on the album.

“I didn’t intend to put any heavy-metal, thrash-metal type of songs on the album at first,” Morton clarifies. “I figured I’ve done so much of that with Lamb Of God that I would almost be cannibalizing the idea. But we felt like a lot of people that will first check this out are going to be Lamb Of God fans, and they’re going to want to hear some metal. And Randy is just one of my best friends. So it was pretty easy for me to want him to sing on a tune. That was a text message away, and he was happy to do it.”

Still, while “The Truth Is Dead” veers closest to an actual Lamb Of God song, don’t expect the more free-form nature of Morton’s solo excursions to seep out. On Anesthetic, the effort’s most adult contemporary-leaning aspects pool together in the smooth, blossoming “Reveal,” an encouraging slow-rocker led by multi-instrumental artist Naeemah Maddox. Could it be anathema for longtime Lamb Of God fans? Possibly. But the guitarist isn’t planning on making any sudden adjustments; Anesthetic now simply exists in creative parallel to his main act.

“I think the process with Lamb Of God is pretty well established, 20 years in,” he says. “By comparison, frankly, it’s a little bit easier to just be a band member. We’re old dogs—we’re not learning too many new tricks. But it’s definitely still been working for us.”

Mark Morton hits the road in March with tickets and dates available here. Anesthetic is out March 1, and you can preorder it here.