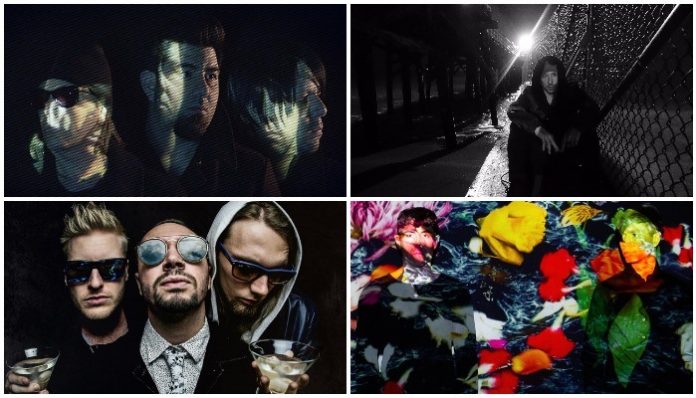 Side projects allow musicians the freedom to explore interests outside of their core band. While countless metal and punk fans stay rooted in genres directly, many of the artists involved love electronic music.

Some of their interest in electronic music isn’t entirely surprising given their affinity for acts such as Nine Inch Nails, Depeche Mode or other legendary bands within the genre. However, others got to flex their love for synths for the first time through side projects.

Read more: Listen to Asking Alexandria’s rebellious blast of energy “Down To Hell”

Take a look at 10 electronic side projects from punk and metal musicians that are worth the time to explore.

Greg Puciato has one of the gnarliest screams in music as seen through his time with the Dillinger Escape Plan. Toward the end of the band’s career, he stepped into his Nine Inch Nails influences with the Black Queen. The project’s dark synth-pop sounds are a perfect matchup for the musician after pummeling through aggressive music for over a decade, allowing his incredible vocal range to soar.

Deftones frontman Chino Moreno has some of the strongest vocal melodies in metal. They’re given the spotlight in his electronic side project ††† Crosses. Their soothing minimalist approach is captivating yet laid back, bringing in elements of dream pop, trip-hop, goth rock and more.

Giles (Between The Buried And Me)

Between The Buried And Me frontman Tommy Giles Rogers Jr. takes the soft, atmospheric and electronic elements of the prog-metal band and mixes them together with post-rock across his solo project Giles. If you’ve ever listened to the grand structures of BTBAM and thought it would be better suited without the heavy parts and chopping the runtime of songs to a more standard length, look no further.

Read more: shYbeast (I See Stars) asks “Will Your Heart Have Room” on new track

Periphery vocalist Spencer Sotelo has an incredible vocal range, so it’s not a shock that he’s explored pop music before. His project Nik Mystery is a sugary-sweet look at what he’s capable of as a melodic vocalist, with the synth-heavy electronic sounds of the band giving Sotelo the opportunity to showcase something completely unheavy.

Psywarfare are definitely not a band for the faint of heart. The noise project started by Integrity’s Dwid Hellion are abrasive as hell with a disturbing sound that most people wouldn’t even consider music. Think of it as more of an art project, but Psywarfare were started for a vastly interesting reason. Hellion saw a report on CNN about the 1993 Waco siege, where the government used sound as a weapon, and the musician took those sounds as a challenge to truly weaponize music.

Tape (Every Time I Die)

Every Time I Die vocalist Keith Buckley ventured into the world of synthwave with the help of producer Joshua Hurley as well as Glassjaw‘s Daryl Palumbo and TJ Penzone (ex-Men, Women & Children) in his chilled-out electro project Tape. It’s completely unlike anything Buckley has undertaken before but shows his skills as a multitalented artist who isn’t afraid to experiment.

AFI vocalist Davey Havok and guitarist Jade Puget do a fantastic job of drawing out ’80s-inspired synth-pop with their side project Blaqk Audio. The group’s sound is deeply rooted in dense, dark dance beats that build on the electronic leanings of some of AFI’s work, with a thick Depeche Mode influence tossed in for good measure.

Corrections House are a supergroup of sorts, involving Eyehategod vocalist Mike IX Williams and Neurosis mastermind Scott Kelly, along with Yakuza’s Bruce Lamont and Minsk’s Sanford Parker, and their main projects’ influence is heavily felt in their sound. The noise-oriented doomy industrial act bring a wall of sound that you would expect from something connected to Neurosis while thunderous metallic booms draw out a sludgy tone.

Demon Hunter vocalist Ryan Clark stepped far away from the groove metal sounds of his core band with electronic act NYVES. The project takes Clark’s strong vocal presence and places it among skittering synths with a dark, atmospheric tone.

Secoya (We Came As Romans)

Late We Came As Romans vocalist Kyle Pavone was an incredibly integral part of the Detroit project’s sound. Outside of his main band, he expanded his skills on the keys to EDM. Secoya brought his passion for EDM to life through upbeat dubstep tracks with a handful of albums and singles to revisit in his honor.