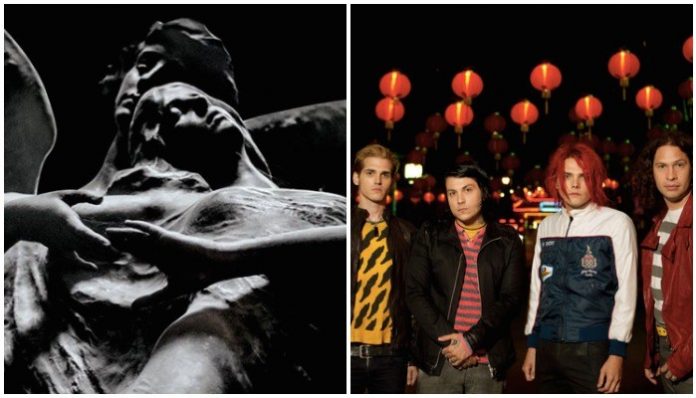 Since the My Chemical Romance return announcement, the band have remained relatively quiet. We’ve gotten a couple of new show and festival appearance announcements, but fans are absolutely desperate for some clue as to what else might be going on below the surface.

For every big MCR moment, the band have found ways to be cryptic and keep us all guessing, so we’re taking the very few images we have available to us to try to figure out what else the band may be up to.

Here are a few things we’ve discovered so far. Please take these with a grain of salt: MCR have proven time and again that they are five steps ahead of the world, and nothing is quite what it seems.

The statue featured in the official “Return” imagery is not new. In fact, it has existed for more than a century in Bologna, Italy. The piece is titled “Cella Magnani” and was sculpted by Pasquale Rizzoli in 1906 as a commission from the widow of a war veteran. The statue depicts an angel in flight carrying a soul away from the physical world, which trails behind at the tail of the soul/woman’s dress. While it is shown in highly saturated black and white in the MCR images, the statue itself is bronze and stands before a blue mosaic wall. The statue is located within the Certosa Di Bologna Monumental Cemetery, which is said to be one of the oldest European cemeteries.

There are several previously established MCR connections to unpack within the statue alone, primarily regarding its location.

Mikey and Gerard Way and Frank Iero all claim Italian heritage. Italy was established as the home country of the Black Parade, the fictional band they played as during its eponymous era. Also, it’s located in a cemetery, which—alongside the ascent to the afterlife depicted in the statue—very much harkens to MCR’s frequent lyrical ruminations on death and what follows.

On another note, the surname “Magnani” originated from the locksmith trade.

When curious fans went deep-diving into the HTML of MCR’s website after the return, they noticed something interesting: The new logo image file was titled “Merlin_983_8idj38862.png” Upon further investigation, they also found the angel/statue image encased in a code section titled “Merlin Cover.” Check out the prevalence of “Merlin” in the screengrab below. 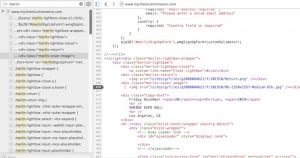 Some have pointed out that there is a font face called “Merlinn” that looks similar to the font of the new logo. You can see in the comparison below that there’s a vague similarity (especially in the shapes of the “R”), but the “MCR” logo is highly modified.

After “Merlin” speculation started to make its waves, Mikey Way posted an image of Gandalf from the 1977 animated movie The Hobbit on his Instagram Story. Many people presumed the wizard cartoon to be a depiction of Merlin. Alas, it was not, but it got us going nonetheless. 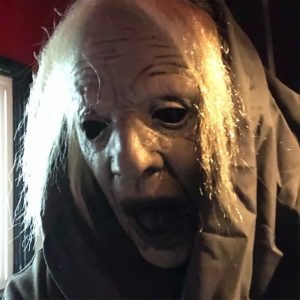 While we’re on the subject of magic, some have found it noteworthy that Gerard wrote in his “2018 Year In Review” that he had been working on a song called “I Am The Hag.”

Gerard had said, “2018 was a dark year full of black magic in my opinion, so it got me thinking about witches again. I was inspired to buy this mask because I had just written a song called ‘I Am The Hag,’ which I haven’t finished yet. It’s kind of heavy. Maybe I’ll release it in 2019.”

Whether that is relevant remains to be seen. It’s also worth noting that in a recent interview on Thrice vocalist Dustin Kensrue’s podcast Carry The Fire, Gerard mentioned his personal spirituality lies within the realm of magick and witchcraft.

Between “Merlin” and the logo, which almost looks to have runic or sigil-like etchings and symbols, it’s becoming feasible that magic is going to play some sort of role in this new MCR era.

Upon first glance, many fans have claimed that the symbols surrounding the three letters of the band’s acronym look familiar. Perhaps it’s that their simple lines and shapes make us think of runes or glyphs we’ve seen in the past. Upon searching many symbolic languages and sound-related runes, this writer has found nothing that matches the MCR linework. That leads me to believe they may be five-stroke custom sigils, primarily in the shape of hands, created by each member of the band representing the concepts assigned to each.

The number five is significant here, because the band were famously working on the album they had tentatively called “MCR Five” (and later revealed as The Paper Kingdom) when they decided to call it quits. With the “Sacrifice” symbol following the name, it certainly seems to be spelling out “MCR” followed by the open-palmed hand, which is also the symbol for five in sign language.

The symbols are backed by the silhouettes of a candle (which seems to be the dominating symbol as it was posted first and has been printed on their first new merch items), a droplet (water? blood?), a hand and what seems to be the sun.

Some people have also pointed out the symbols are reminiscent of backlit paper cuttings. Perhaps that’s a reach, but if accurate, it’s a possible nod to The Paper Kingdom.

What are your favorite theories about MCR’s new look? What do you think it all means?