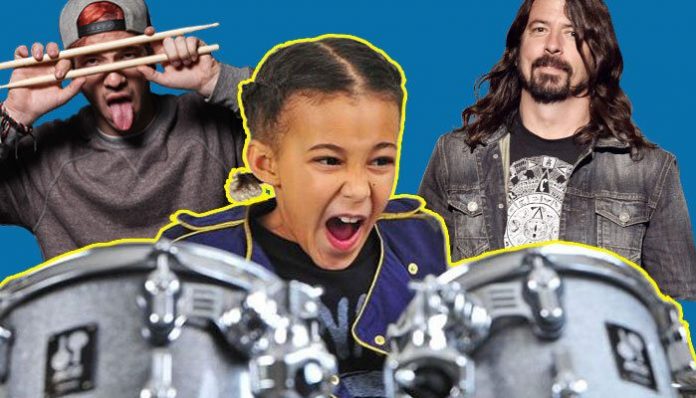 If you don’t know anything about 10-year-old music prodigy Nandi Bushell, it’s time to get hip.

Bushell has gained tons of fame online for her badass covers, some of which even get respect from the bands themselves.

Because she’s just such a killer talent who needs to be recognized, we rounded up 10 of her best covers that you need to see immediately. You can check those out below, and be prepared to get jealous over her undeniable skills.

Rage Against The Machine – “Guerrilla Radio”

In this cover of Rage Against The Machine, which Bushell posted in solidarity with the Black Lives Matter movement, she shows off her immense musical talent on drums, guitar and bass while standing up for what she believes in. Even Tom Morello gave her a shout-out for how badass it was.

While this isn’t technically a full cover, Bushell is featured in the official video for blink-182’s “Happy Days” alongside Machine Gun Kelly, Steve-O, Bert McCracken and more. Fans also submitted clips of themselves performing and dancing to the track while social distancing, and Bushell didn’t disappoint.

Josh Dun gave his stamp of approval of Bushell’s twenty one pilots cover, in which she proved she’s a total beast on drums.

Foo Fighters – “The Sky Is A Neighborhood”

Bushell is a big fan of the Foo Fighters, and when she posted this killer cover on drums and guitar, Dave Grohl became a big fan of her as well. Now, let’s only hope her dream of playing with the legend one day comes true.

Again, Bushell shows off her multi-instrumental skills by covering this classic Red Hot Chili Peppers track, even on the keyboard.

It’s almost hard to tell the difference between Bushell’s drumming and the original Killers track because it’s so spot on. Her energy is absolutely contagious in this video.

Disturbed – “Down With The Sickness”

Not only does Bushell prove she’s a natural with this drum cover, but she also showed off her legit headbanging skills. This Disturbed cover makes us need to see her demonstrate her chops live.

This video is top-tier adorable because it features her brother on guitar, and the two belt out every word to the Green Day song. We need this band to tour ASAP.

There’s no way we’d even come close to hitting all of the notes in this iconic System Of A Down track, but for Bushell, that’s no problem. To make it even more impressive, she was only 7 when this video dropped.

While Bushell was born way after the ’90s grunge era came and went, she’s a pro at hitting these iconic drum beats in this cover of a Nirvana track.