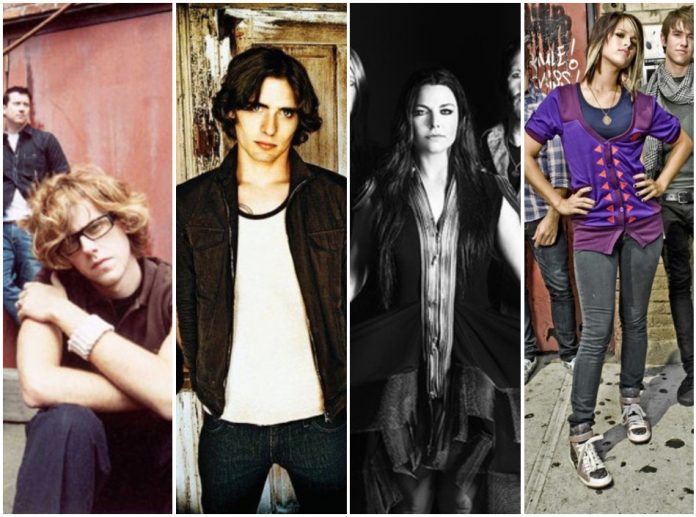 The emo genre is cathartic by nature, but slow songs provide an opportunity for artists to reflect even more deeply on the feelings that make us human. And somehow, even when featured alongside angst-fueled, uptempo tracks, the ballads always end up being some of the most memorable songs on their respective albums. They have this certain kind of staying power that outlasts and transcends the “thing” of the moment. In short, you can’t help but come back to them long after you’ve exited your emo phase.

From smash hits that still dominate alternative radio stations after 10-plus years to indie gems that started as best-kept secrets, we’ve compiled a list of piano-heavy songs that are sure to evoke some nostalgia—and maybe even draw a tear or two.

Secondhand Serenade – “Fall For You”

If your iPod Nano was loaded with sad songs, we’re willing to bet that Secondhand Serenade’s “Fall For You” was one of them. Thirteen years later, it’s still impossible to resist belting out John Vesely’s heartfelt lyrics about the girl who’s impossible to find. We haven’t yet given up hope of seeing a new album from the band sometime in the near future.

Augustana’s “Boston” was the ultimate song where you leaned your head against a car window and pretended you were in a music video. It was also the perfect track for anyone in need of a fresh start. Despite being a simplistic ballad, it made you want to set off on an adventure, especially as it built up toward the end. Vocalist and pianist Dan Layus is now continuing the band as the sole remaining member, and we’re hopeful that there might be another song as iconic as this one on the horizon.

The All-American Rejects – “It Ends Tonight”

Early 2000s rock chart-toppers the All-American Rejects could not have picked a better way to kick off this beautifully simple ballad than with piano chords. They created an opportunity for frontman Tyson Ritter’s vocals to really take full effect in the chilling first verse and made the eventual drum beat drop feel so much more epic. You can practically feel darkness turning to light.

If you don’t instantly become the kid in the “turn up the volume” meme every time you hear this song, you’re lying. Out of all the hauntingly beautiful ballads Evanescence have put out over the years, “My Immortal” is definitely one of the most sing-along-able, whether or not you have pipes like Amy Lee’s. Go ahead, get swept up in the emotion. We won’t judge.

Hey Monday’s iconic 2008 debut album, Hold On Tight, was full of emotive tracks, but the soulful “Candles” especially stood out. It just has this way of making you feel as if you really are in a dark room, lit only by candles. Cassadee Pope’s vulnerable vocals over the piano still give us the chills to this day.

Like fellow pop-rock-frontwoman-turned-The-Voice–sensation Pope, Juliet Simms quickly became known and loved for her unique vocal style when her band Automatic Loveletter emerged onto the scene. In this soft, slow breakup song, she displays the perfect balance between the pristine pop and the ragged-raspy sides of her voice. “Hush” remains a favorite among fans who’ve been following Simms’ musical journey from the beginning.

Just when we thought Mayday Parade couldn’t possibly write anything sadder than “Miserable At Best,” they released their 2011 EP, Valdosta, which featured their ultimate tearjerker, “Terrible Things.” The song finds Mayday in their most musically stripped-down state; a good chunk of it is simply minimalistic piano and vocals, with frontman Derek Sanders telling a tragic story in a way only he can.

For many, dark eyeshadow-rocking, pink hair streak-sporting singer-songwriter Avril Lavigne was a gateway into the world of pop punk. But even in her heaviest musical era, she was still gracing the scene with power ballads such as “When You’re Gone.” It was the love song we didn’t know we needed amid the fast, loud, guitar-centered anthems that were blowing up the charts at the time.

Before Andrew McMahon’s wildly successful solo project, Andrew McMahon In The Wilderness, there was Jack’s Mannequin. Even before that, there was Something Corporate, the band with which he’s most closely associated by OG emo kids. McMahon has carried his heart-on-sleeve songwriting style and amazing piano skills through every stage of his career, and this was where it all began. Throughout its nine-and-a-half-minute time span, the beloved track “Konstantine” creates a whole world for listeners to dive into, telling the story of a strained relationship in vivid detail.

The beautifully layered instrumentals, grunge-y vocals and powerful lyrics in this Smashing Pumpkins ballad make it a true ’90s classic. Sure, it might be just as driven by acoustic guitars as it is by the keys, but it certainly wouldn’t carry the same level of emotion without them. The song played a huge role in the massive mainstream success of the band’s 1993 album, Siamese Dream, and will likely always be a staple of their live performances.