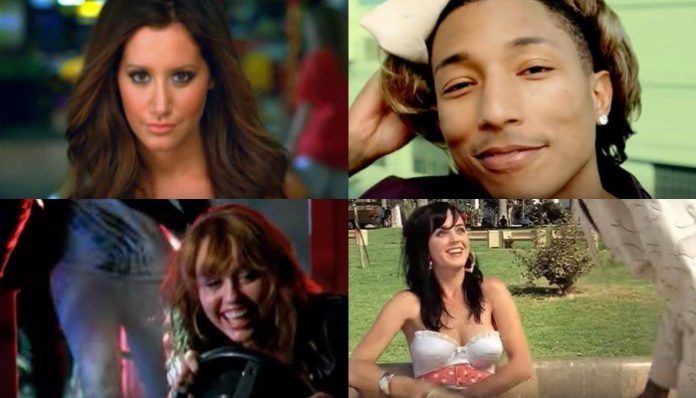 If there’s one thing we never get sick of in scene music videos, it’s a shocking cameo from a celebrity or pop artist that we didn’t expect. Some of the most iconic cameos include Kim Kardashian in Fall Out Boy’s “Thnks Fr Th Mmrs” and Leighton Meester in Cobra Starship’s “Good Girls Gone Bad.”

Over the years, there’s been some pretty amazing pop-punk videos that crossed genres by featuring surprise appearances from pop stars. From members of boy bands to pop divas, we found 10 cameos of pop stars in scene music videos to give you a healthy dose of nostalgia. Check those out below.

Good Charlotte’s video for “Lifestyles Of The Rich & Famous” is undoubtedly over the top to begin with. If you remember correctly, though, *NSYNC singer Chris Kirkpatrick made a cameo in the memorable video. He had a robust role in the courtroom scene that was essential to the video becoming so iconic.

Who could forget when Travie McCoy featured his then-girlfriend Katy Perry in the video for this song before she was a mega-star? Not only is that amazing, but it also features Fall Out Boy vocalist Patrick Stump both on the track and in the video. This video just screams 2006 and deserves to be remembered.

The Thirty Seconds To Mars video for “City Of Angels” is more of a short film than a music video. However, it features many notable people who describe Los Angeles from their point of view. Those celebrities include Kanye West, Selena Gomez, Lindsay Lohan and more.

Read more: 10 metal-loving mainstream musicians and pop artists who might surprise you

The video for the remix of “Irresistible” by Fall Out Boy features Demi Lovato both on vocals and in the music video. The visual makes references to several other FOB songs, including “Centuries,” “Dance, Dance,” “Uma Thurman” and more.

This makes sense considering Trace Cyrus is the guitarist of Metro Station, but it’s still a pretty unexpected appearance. Not only does Miley Cyrus appear in the video, but it also includes Billy Ray Cyrus and Hannah Montata star Mitchel Musso. The trio of celebrities are seen partying and having a blast while the band jam out to the song.

While some video cameos are shocking or unexpected, the choices for this Fall Out Boy visual are just straight-up weird. Not only do Tyga and Pharrell show up in the video, but so do blink-182’s Mark Hoppus, reality star Spencer Pratt and Cobra Starship’s Gabe Saporta. It’s a lot to take in, but the appearances definitely took us back to the mid-2000s immediately.

Before he was traveling the world on multiple tours as the vocalist for Queen, Adam Lambert was partying with his friend Kesha in this trippy music video. The video is full of neon lights and a lot of dancing at a music festival set in the middle of the woods. It stars many of Lambert’s real-life friends, which apparently also included Kesha.

8. *NSYNC’s Chris Kirkpatrick in A Day To Remember’s “2nd Sucks”

Kirkpatrick of *NSYNC apparently loves the scene as he also appeared in this 2012 A Day To Remember video. The boy-band vocalist plays a sleazy doorman who takes money from some teenage boys in order for them to meet Snake, a tattooed tough dude who means business.

After riding the successful High School Musical wave, Ashley Tisdale starred as the love interest in the video for this iconic Boys Like Girls track. In the video, she makes all the guys fall for her while she walks through the arcade as the band perform. Even though she didn’t get to show off her “Fabulous” vocals, she was a perfect fit for the lead role.

While Big Sean has collabed with the scene icons in the past (“The Mighty Fall”), he also makes a super-swift cameo in their video for “Uma Thurman.” If you look closely around the 3:30 mark, you will see him dancing in a photo booth next to a pink-haired Pete Wentz.

Which is your favorite music video cameo? Sound off in the comments below!