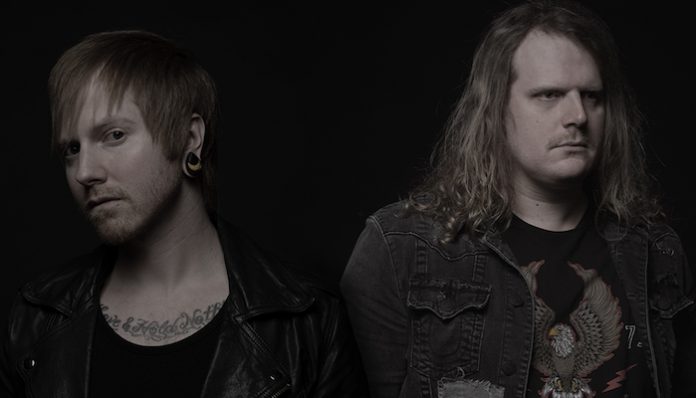 Being in quarantine has made recording and creating music videos a little more difficult but definitely not impossible. Composed of former A Skylit Drive frontman Michael “Jag” Jagmin and Jonathan Kintz (ex-Of Mice & Men), Signals are teaming up with AltPress to debut the music video for “Turn Back Crime.” The track is the second release off their upcoming album, Death In Divide.

After Jagmin left A Skylit Drive in 2017, he and Kintz developed their new post-hardcore project. Over the past few years, the duo have dropped several singles, including “The New American Religion” and “The Vulture (All It Takes II).” While being in a large band had its disadvantages, Jagmin says he now has all the creative freedom he needs with Signals.

The first track off their debut LP, “Not If I Save You First,” featured heavy riffs and ripping growls, while “Turn Back Crime” shows off Jagmin’s signature vocals and Kintz’s upbeat guitar playing. Despite the coronavirus quarantine, Jagmin says creating their latest music video was a welcome experience.

Check out the “Turn Back Crime” imagery and what the singer had to say about its process below.

“Turn Back Crime” is inspired by your experiences with a former manager. How did the track come together?

MICHAEL JAGMIN: Our business manager since the inception of A Skylit Drive had been embezzling from the group. This song was actually in the works, with my melodies for a portion of it written [for] quite some time before the rest of the album. The music was then written specifically to my melodies.

When you’re writing a new song, what comes first, the lyrics or the instrumentals? How do you work with Jonathan Kintz to bring everything together?

With our distance, all of the writing, minus the few times we flew Jonathan out to Texas, was all done emailing back and forth. The times Jonathan came out here was once. We had a solid batch of songs ready to lock in with final touches. The entire album was tracked from our respective homes. He has his own home studio, while I rocked out in my closet. The ungodly amount of clothes in there really helped deaden the sound, making it a perfect vocal room.

The quarantine has forced an entirely new way of completing things, such as a music video, on us. Before, if need be, members were flown to where they could simply film together, while now the world is upside down. “Not If I Save You First” and “Turn Back Crime” were filmed in both Texas and California. My brother-in-law, Colton, is great with a camera and has been a godsend filming my shots entirely himself. Jonathan, on the other hand, has worked with a couple of different videographers to get his shots. “Turn Back Crime” is really a big “fuck you,” so I wanted to physically be in violation in some form. It brought me back to being a teenager running wild, filming where we weren’t supposed to and rocking the eff out regardless.

With your team already spread out around the country, what was the process like in creating the song and video? What were some differences between this video shoot and previous shoots?

Just about every shoot in the past has involved multiple cameramen, all kinds of lighting, big budgets, etc. These videos so far have been all about taking it to the grassroots. The ideas have been all our own, with our label really giving us ultimate freedom. It’s been entirely new but very rewarding.

The track is the second single off Signals’ upcoming release, Death In Divide. Your last release “Not If I Save You First” was heavy and felt very cinematic. What can listeners expect for the rest of the album in regards to your sound?

Listeners of Death In Divide can expect a roller coaster of an experience. This album is the product of 2-plus years of writing, so without even trying and letting things happen naturally, it covers so many bases.