SWMRS know everything’s on fire, and they’re here to ease the flame

When it seems like everybody has taken the term “punk” and used it as a marketing copy instead of a battle cry, SWMRS have doubled-down on their conviction to deliver one of the best records of the year.

It’s 10:30 a.m. on a Thursday morning, Cole Becker has just woken up next to his brother and SWMRS bandmate Max at their sister’s New York apartment and he is on one.

“We breed this violence, and it’s so American, and it’s super-fucked,” the frontman begins, leaning into a screed that’s half dispassionate analysis and half simmering rage as it careens through white male anger, gun control, the sorry state of sex education and the connections between them. “At one point, I wanted to be an academic,” he concludes. “I wanted to write essays about problems and identify what was going on with them.”

Life, of course, had other plans for Cole Becker. As he, guitarist/vocalist Max, bassist Seb Mueller and drummer Joey Armstrong prepare to unleash their latest bundle of righteous angst and purposeful tenderness, Berkeley’s On Fire, on the world, Cole is taking stock of how he wound up in VFW halls rather than the halls of academia. “The best solution that I could come up with is singing, and getting people to sing,” he says.

“I know people who have admitted to me that at one point, they were gonna shoot up a school,” he continues. “And they didn’t, because somebody made them feel understood. When you can sing about something, you can feel understood, kind of like the way that when I first went to a punk show, I finally felt understood.

“Just the act of dancing and singing is so disarming, and it’s so anti-violent that it might just work for one person. You know?”

Preteens when they first began playing together (“Max, Joey and I watched School Of Rock, and we were like, ‘Fuck it. Nothing else matters. We’re gonna play in a band forever,’” Cole recalls), the longtime friends grew up backstage at Green Day stadium gigs (Joey is the son of frontman Billie Joe) but cut their teeth at the Berkeley landmark 924 Gilman St., the DIY epicenter of the East Bay punk scene known just as well for its stringent moral code (no violence, no racism and, uh, no selling out) as the careers it has launched, including Operation Ivy, the Offspring and Green Day.

“The first time we played at Gilman, and the first time I saw a mosh pit at a punk band, was the first time when I was like, ‘Well, it doesn’t really matter if I feel different from other people, because this is freedom,’” Cole remembers. “‘That strange feeling inside of me can come out in full force, and I can just be myself now.’ And I think I’ve been chasing that ever since.”

Recording as Emily’s Army after working through a series of early project names, the band issued two full-lengths produced by the elder Armstrong, and while there’s maturation to be heard between 2011’s Don’t Be A Dick and 2013’s Lost At Seventeen, both albums owe a heavy debt to early Green Day and their Gilman-era peers such as the Mr. T Experience, full of bright, snappy, straightforward melodies, with all the propulsion of first-wave punk and none of the grit. Both albums were well received, and Emily’s Army toured them extensively (including a full summer on the 2013 Vans Warped Tour). Had they simply continued apace, pumping out a set of catchily derivative pop-punk finger-snappers every other year, there assuredly would have been a niche for Emily’s Army in the musical ecosystem.

But in 2014, Cole, Max and Joey hit the reset button, and rebranded the act as SWMRS. “When we changed our name, I was 20,” Max points out. “We were listening to the Vaccines and FIDLAR and Wavves and Best Coast. It’s the easiest thing to do when you’re [10], start a pop-punk band. We changed our name because, all of a sudden people think we’re forever going to be 13, 12, you know? [As SWMRS], we can start playing music that we actually listen to. Emily’s Army were great; let’s just leave it where it was.”

The first album under the SWMRS moniker, 2016’s Drive North, marked a sharp right turn for the band, becoming leaner, meaner and decidedly more chaotic than their prior work. But if Drive North expanded the band’s outer boundaries, Berkeley’s On Fire wipes them off the map entirely. Produced by Rich Costey (Muse, Death Cab For Cutie), the record ping-pongs wildly across, through and in between genres—from a tetchy, hyperkinetic rant about the state of news media from a gassed-up Cole (the title track) to the warm synths of barebones lament “IKEA Date” from the bouncy new-wave bummer-jam “Too Much Coffee” to the twenty one pilots-esque “April In Houston,” the band’s first track to hit Billboard’s Alternative Songs chart.

The sprawl is by design. As Max explains it, “everybody listens to music now in playlists. People’s attention span is really short, and they want to be surprised.” From his vantage point, it’s not just about the state of music in 2019, it’s about the state of humanity. “You see people with Taking Back Sunday tattoos who are working on Wall Street,” he says. “It’s like people are totally mixed up, and it’s all over the map. So it’s not like you play songs now for the punks. Who are the punks?”

While SWMRS have come a long way since their Emily’s Army days, it would be a mistake to conflate their newfound maturity with self-seriousness. As Cole is quick to emphasize, “we’ve always liked to fucking rock the party in a stupid way. We just want to be able to go into any room, any situation, and make people dance. And the way you do that best is by writing good pop songs that are well-crafted and handmade—and done yourself.”

That last part is something for which the brothers Becker are sticklers—Cole is very adamant in his refusal to play the songwriter-for-hire game. “We’re in a really weird place in music right now where everybody wants everyone to have hits,” he shares. “And they’re willing to have someone else come in and write the hit, which doesn’t make a lot of sense to me.

“Max and I both have taken songwriting so seriously since we were 10 or 12 years old,” he continues. “We’ve just always known that that’s what we wanna do. And so it’s hard for us not to judge people who do rely on songwriters.” It’s both a harsh take and a refreshing one in 2019, a clear reflection of his Gilman-bred DIY values and a statement about how he views the strength of his own, and Max’s, craftsmanship.

“I think there’s a lot of people right now who put out very raw, personal ideas of songs,” Cole says. “And that’s cool, but the real value, I think, in writing a really good song is taking that raw idea that feels so undeniable to you to a place where it feels undeniable to anyone who hears it. There’s an element of really taking into account how to make that thought universal.” It’s an ethos that pays off in spades on Berkeley’s On Fire—despite the wildly divergent sounds the album cobbles together, each track feels big and inviting, and the album hangs together as a body of work on the strength of its songcraft.

For his part, Max sees his own writing style as the yin to Cole’s yang. “Cole is definitely the frontman of this band, but we have certain songs for certain listeners that are in the back of the room, and that’s my job,” he asserts. “Cole’s talking about how, fuck, Donald Trump’s president, there’s hurricanes, the world [has] problems, and meanwhile my songs are like, ‘Well shit, I still got to go eat some dinner tonight. I still have to take out my laundry.’ It’s more talking about how you personally deal with daily life.” 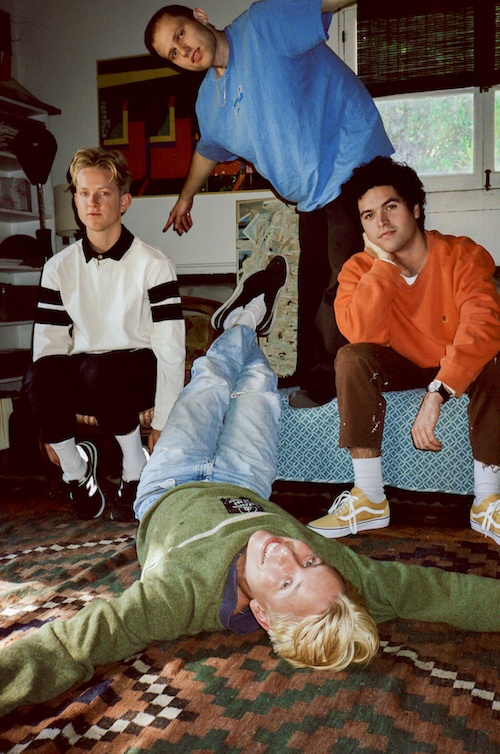 The personality differences extend beyond their songwriting styles. “Working with Max is hard,” Cole admits. “It’s really hard. Because he’s also an aggressively honest person. He doesn’t really skirt around telling you how he feels about something. I’m so opposite, where I just let things happen, and I don’t say anything until they fuck with my head.”

Both brothers cop to feeling pushed by the other. (During the conversation, Max goes so far as to say his favorite songs on Berkeley’s On Fire are Cole’s). But they’re also quick to caution that the sibling rivalry only extends so far, or as Max puts it succinctly, “It’s not like a ‘fuck him’ kind of thing.” Credit it to a lifetime of learning how to live and work together.

“Max and I are so different, but we hang out all the time,” Cole says. “In certain ways, I don’t understand a word he says, and I think he feels that way about me too sometimes. But there’s certain things that are just based on such a deep understanding of the world that we both learn from [and] how we grew up, that we have a really intuitive relationship.
We just have a very similar value system in our head.”

Ultimately, it’s that value system that fuels both Berkeley’s On Fire and the band itself. As Cole points out, “The secret about East Bay punk is that, as opposed to L.A. and New York where it was an aberration from hippie culture, East Bay punk [welcomed] all the old hippies, because the [Bay Area] hippie culture was so much more political and so much more deeply informed by revolutionary thought. All the old hippies embraced punk, and they became one mega force.”

SWMRS reside where that punk energy and hippie spirit coincide. “I think we’re all just at a point where we’ve seen how the negative energy cycle of the world we live in affects everyone,” Cole says. “We just want to put positive energy into the world.”

This feature originally appeared in AP #366 with cover stars iDKHOW. The issue is available now here or below.