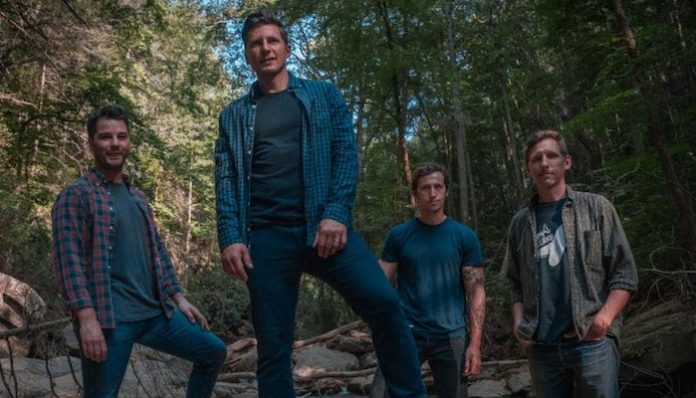 Coming up on 20 years in the scene and releasing their most adventurous LP to date, longtime emo unit (and Drive-Thru Records roster staples) the Early November are only picking up speed. However, frontman Ace Enders shares that after taking an indefinite hiatus in 2007, the group’s future wasn’t always clear.

“I feel like we had all these crazy goals as a young band. And it’s weird to even say, but it was like, ‘We hit this many records, we’re gonna get a bus. We hit this many records, we’re gonna do this,’” he explains. “We put so much pressure on [selling] records. I think it ended up ultimately making everyone crazy. That probably is what forced us to have to take the break we did.”

After four years, the musicians regrouped in 2011, and they just released Lilac, their third record since reuniting. With Enders now being the father of two children, life as a rocker is certainly different than it once was. So is his art.

I’m curious to hear what it’s been like for you continuing to make music, with now also being a father.

ACE ENDERS: The whole mindset is different. We did a New Found Glory tour in the summer, and I was coaching my son’s baseball team. I had to leave the season early and miss the championship game because I had to go on tour—and that stuff is definitely tough. I want to show [my kids] so badly that you can do whatever you want in life. Because it’s really hard to take a chance on things now, especially as a kid.

Even when I was a kid, it was hard; nobody thought that I would ever do anything. I really want them to grow up with that idea in their head of, “Yeah, you can go do something weird. You can achieve whatever you want to achieve. Just don’t stop is the most important thing; and be passionate about it.” I think for them, stuff like that is obviously tough, but they get to come out to shows. They came out to California [for that tour], and they were so psyched. They’d come onstage and make the crowd jump, and they loved it. To see them happy and sing and think that it’s cool—I hope that it leaves the [right] impression and does what I want it to do for them. There are different ways to think about it, and it’s all about that mindset of, “What are you getting out of it?” I’m not just getting out of it a career. I’m getting out of it a life lesson for them, as well.

How did your time on hiatus change you as an individual and the Early November’s working dynamic?

The thing that jumps out most is that you realize real quickly how hard it is to catch lightning in a bottle two times, let alone one time. I think when a band or some type of artist gets popular and gets big, it’s more than just songs…it’s like a moment that’s created. The thing that we realized quickly once we did reunion shows was that moment is still alive for people, you know? We’ve had a couple [of] members move around—everybody’s still a part of it. Joe [Marro, guitarist] doesn’t tour anymore, so he’s management side strictly now. It’s an ever-unfolding thing, which is kind of cool.

Read more: The Early November transform ‘Lilac’ into a storybook—review

“Emo” is known for being all about rebellious teenagers and standing up against authority, and some may question if it’s a genre you’re allowed to get older in. I’d love to hear about how the perspective on making rock music is different for you now than it was in earlier years.

I can’t really put my finger on it, but I think you can age in it. It seems to me that even in the beginning when the genre started to explode, the bands that we all looked up to were already older at that point. They had already been doing it for a long time.

It’s really complicated. Yesterday, we had a press day, and I kept making the joke that “yeah, we’re emo-pop.” But maybe that’s what it is now. It’s “pop emo.” If you look back at any emo music, it’s just a darker, deeper type feel, and I think we’ll always carry that. Whether people want to associate us with that [emo] or not, that’s up to them.

Are you excited or nervous about the release of Lilac?

I’m very excited about it. I’m excited because I feel like it goes back to that question, “Can you age in emo?” and it’s definitely different. It doesn’t sound like what a typical emo band would sound like, and I’m very excited about it for that fact. I feel like we’re at a point where the people that come to our shows—I’m not gonna lie—they’re not young kids anymore. They’re not teenagers. It’s people who are in the same way of life as us, and I just feel like it’ll relate to them…I feel like it’s the right time for it.

Read more: Emo band or Edgar Allan Poe—can you figure out who wrote it?

Lilac is starkly different from your previous work and the gloomy melodies that were a popular aspect of the band’s sound. When you started the process of creating this record, did you know that you wanted to do something new?

You know, the record was completed as that gloomy record…I just didn’t feel complete with it…I felt like I’ve done that so many times, and it’s not that it’s not good. It’s just that if you’re not stretching your abilities, you’re just going around, and life’s too short to just go around again. I’ve had some success with writing pop songs for people; I do a lot of songwriting, but I never do that [pop] for myself. I felt like, “Why not? Why not do that?” Because it’s a very real part of my life. It’s not something that I had to force. It is different, but I hope that it’s received in the way of not just how it’s dressed up. I think if you get deep enough in, you’ll hear where it connects to “vintage” sound, if you will.

There’s this great sense of weaving dark and raw lyrics with uplifting and danceable melodies. How do you pull that off?

It’s something that I think over time I’ve just morphed to [because] as a younger band, we would be like, “We want to go to radio, but oh no, we can’t go to radio, because there’s just something too dark about it.” I’ve heard that so many times in my life: If you’re a working band, the prospect of going to radio and before you do, someone saying, “Oh, it’s just a little too dark; we can’t,” is heart-wrenching. I think I’ve slowly trained myself to take those dark things that you can sink into, but lace it in, in a way that’s palatable so you can actually get through it, and then discover, “Oh wait, there’s a lot of depth here. It’s not bubblegum.”

There are some hauntingly self-aware sentiments lyrically, particularly in “Hit By A Car (In Euphoria).” Was it difficult digging deeply into your own conscience when writing that song?

I went into the record very depressed and in a dark, dark place. I was very much in a place of analyzing myself and feeling all these things and dealing with that [while also] dealing with whatever substance you may consume that makes you feel more human and try[ing] to deal with why that is a thing. I think a big part of it, especially [on that song], was you have that feeling, but it could be worse. The whole process was a test for sure. But that’s why I also wanted to turn it around at the end and add the more fun, danceable flavors.

What’s something you want people to know about Lilac before they hear it?

If I were to start somewhere, I would say that for me, it was a journey. It was a real journey of where I am and testing the balance of being a person getting older and having a family. I think it’s a very relatable thing in the sense [that] we’re constantly evaluating ourselves and wondering if we can do better or if we’re in the right place or if we deserve to be in the place that we are or if we can do anything to improve our space or if we should feel the way that we do about ourselves. I think it’s very much a journey—and I hope it gives people a light.

Lilac is out now, and you can listen to it here. This feature originally appeared in AP #374 with cover stars Sleeping With Sirens. The issue is available now here or below.