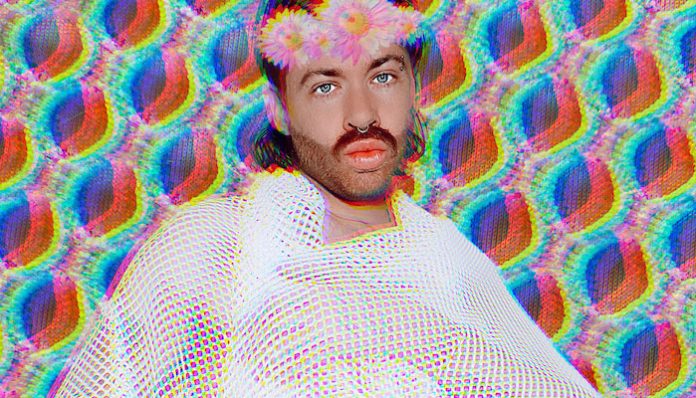 Maxim Faster, aka the Venus In Scorpio, is an electro-pop star in the making. Powered by a battery of synthesizers and a voice that’s more rock god than pretty android, VIS is merging the synthetics of the ’80s with boisterous rock vocals. Described as the “mysterious and moody They next door,” the Venus In Scorpio’s agender queer synth-pop defies the calendar. Hear for yourself below, as Alternative Press is premiering “Blissed” today.

According to its creator, “Blissed” is “a triumph over the struggles of learning to love yourself. Once you learn to love yourself enough to stop focusing only on yourself, you’re able to come together with other people and celebrate under the same sun, experiencing each other’s joy and being a part of the universal recovery and evolution of humanity.” The Venus In Scorpio is bringing an unapologetic message of self-empowerment, liberation and sex positivity in a world where everybody is simply too damned uptight.

Read more: Here are 10 punk bands who made synths and electronics rock hard

We’re completely down with VIS’ ransacking of decades past to color our decidedly dragging 2020. They spoke to us about their influences (likely, unlikely, other), relocating to Berlin and how sometimes getting over one’s self is paramount to everything else in life.

What was your gateway drug getting into synthesizers and electronics? “Blissed” feels like the best single of 1987, but I’m pretty sure you weren’t on the planet then. I’m hearing a lot of period electronic stuff such as Blancmange and Bronski Beat with your rock ’n’ roll soul on top of it. How’d you pull that off without a time machine?

Wow, thank you so much! I definitely love all that stuff. I got into Depeche Mode at a really young age, and they were a big influence for me, for sure. In my 20s, I was heavy into groups like Ladytron, Peaches, Ladyhawke, CSS and Goldfrapp. I really dug that electro-pop scene at the time, and my tastes were really defined by it. My style largely has to do with the production at my disposal. For someone who primarily wants to sing, synth patches have always been easiest to work with. I never knew what I was doing when I started playing around with my synthesizers as a kid. I guess this result is just from years of trying to figure out how to make something on my own.

“Blissed” is really joyful and celebratory. But like you said, it’s a celebration of self-love. What kinds of things did you have to do to “get over yourself,” so to speak, that allowed you to write that boss track?

It’s funny: I think as humans, we search high and low for this connection with others. We look for love in all these other places and things and people, often before looking inward and finding it within ourselves. It’s been quite a journey of finding myself and loving who that person is. But I think once you do, you’re able to stop obsessing about whatever it is that you’re not, whatever you want to be, and you start connecting with those around you.

I guess “Blissed” is almost like this sublime feeling you get when you’re kind to yourself and you start to attract those around you that amp you up. I think when a person is stoked on whatever their thing is, it’s contagious. People just can’t help but vibe with someone who’s high on their own supply, so to speak. As a kid, I was really inspired by Andrew W.K. His whole thing is so positive. He just wants everyone around him to feel empowered and have a good time. He’s like this big puppy you can’t help but love. I took a lot of inspiration from him.

You recently moved to Berlin. The electronic music scene there is thriving. But what are the ultimate social and psychic ramifications of moving there? Have you had it with Trump America, or is this a much more complex subject?

I grew up in George W. Bush’s America, I was born on 9/11, and the World Trade Center tragedies really set the tone for my generation. We’re all so sad and jaded, but I never thought in my wildest nightmares that we’d have the shit show we have today with Trump. I really didn’t want to stick around to see what’s going to come next. I love L.A., but I was starting to feel hopeless there. There are few other places in the country I’d feel safe or happy living in. I was talking to my therapist one day, and she was like, “Oh, do you know I’m moving to Barcelona?” She inspired me to seek a similar path.

I have a few friends who have expatriated here from the States, and I loved the few days I got to spend here in 2017. So I just thought, “Why not Berlin?” It’s been really great. I haven’t had anxiety or been stuck in a car anywhere. Everyone is super-weird, but it’s so safe. You really feel the peace and the chillness. My mental health has never been this stable, and it doesn’t feel like I’m working to survive anymore. There’s something special here for me, for sure. And my German sucks, but I’ve been trying, and people have been super-sweet about it.

Maxim Faster is a pretty amazing name for a solo artist. What’s the resonance for you making music under the name Venus In Scorpio? Scorpios are recognized as being assertive psychically and passionately. So while your name is pretty cool, VIS reveals more if fans want to delve into the nuances of astrology. Should fans infer that the VIS “band name” encapsulates all aspects of your being (psychic, artistic, other) equally?

My friend gave me Maxim, and Faster was just my first association after that. I had been making music under the Venus In Scorpio for about two years. But my real name up until about March was Philip Moak. It’s a weird and uncommon name itself, and I love it, but I definitely never felt like a “Phil.” Maxim is a name that my friend thought looked more like me. I was into it.

My Venus is in Scorpio in my personal astrology birth chart, which is where I got the name. Most of my music definitely weaves that dark and mysterious Scorpio energy with the more lighthearted aspects of my personality and chart. I’ve always wanted to sound like a full band, so I’ve always named my projects like they’re a band instead of going by my name. I want fans to infer that the Venus In Scorpio and Maxim Faster are the same thing, maybe like a persona behind a persona. Because that’s the other thing: I’ve had a crazy past, but a day in my current life is pretty chill. So with my music, I like to dive fully into this fantasy realm. I’m definitely a different person when I hit the stage, someone I wouldn’t expect to exist just walking down the street.

Read more: The Haunt invite you to rock out without judgement on “Brag About”

That’s what’s really fun about it for me, taking these parts of my astrological pattern and mixing them with this space alien energy I feel to create art that personifies my fantasy self. These iconic characters like David Bowie or Grace Jones or Freddie Mercury—they just don’t exist anymore. I want to be that for my generation.

I wanna make music that explores the darker depths and lows of life just as much as the highs. At the end of the day, this world is really fucked up, and we have to do our best to stick together and party until it gets better. But I think you can only come down so far before you go back up. I think we have no choice but to have hope and believe that things have to get better. There’s nothing left for us to do but evolve. “Blissed” happens in a time of revolution, and after it gets this bad, there’s only room for evolution.

The Venus in Scorpio · Blissed