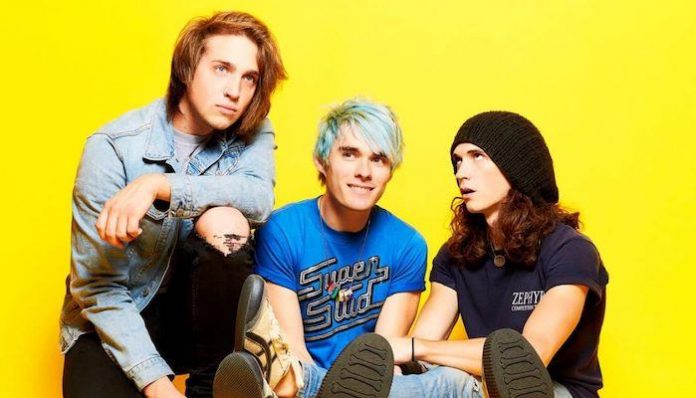 Three years ago, Waterparks cemented themselves into the scene with their debut studio album, Double Dare. With two EPs under their belt already, Parx set out to prove they were more than just a “pop-punk” band and succeeded with flying neon colors.

As most Parx fans are well aware of by now, when it comes to God’s favorite boy band, there’s usually some kind of hidden meaning between everything they do and say. These clever masterminds of the music industry have had things planned out longer than you may have realized, dropping clues and foreshadowing things to come long before we were ever aware.

To celebrate the third anniversary of Double Dare, we’ve dug up 10 fun facts, clues and Easter eggs revolving around the era that will blow your mind.

1. The Double Dare cover ties into the FANDOM album artwork

Prior to FANDOM’s release, Waterparks revealed how previous albums Double Dare and Entertainment tied into the creation of the album artwork.

“The FANDOM art is a play off Double Dare and Entertainment but evolved,” Waterparks shared. “The Double Dare art had the fruit theme with the grenade. This is the same premise, but all the colors have completely changed in the world around the Double Dare era. Just like in real life for me, being that I’m still me, just evolved and doing/living the same things, it’s all just progressed and changed, including the focal subject of the cover. This is a visual representation of the aftermath of that album (the explosion after the Double Dare grenade causing the splatter) on FANDOM. I wanted this and the start color changes to show the mood progression and that it’s all a completely new world.”

2. There was a specific reason “Stupid For You” was released first

In an APTV interview, Awsten Knight revealed the reasoning behind the decision to release “Stupid For You” as the debut single from the album.

“It’s the only one where I was demoing in my room, and my parents came in asking to hear it,” he explains. “I assume they heard other ones, but they were like, ‘That sounds really good. Will you play it?’”

3. Double Dare marked when most fans began picking up on the alphabetical releases

It took you this long?? We all been knowing since like double dare

It wasn’t until the Double Dare album era that fans began putting the clues together and discovering that Waterparks were naming albums in alphabetical order. Beginning with Airplane Conversations and continuing through their latest release FANDOM, we can’t help but wonder if the band will G-note us next.

Read more: 10 Awsten Knight tweets that made us laugh so hard we cried

that's an acoustic version of a full band song, this is the first actual acoustic. WHY YOU GOTTA MAKE ME CLARIFY MAN

@waterparks so lemonade is an oldleaked song. &otto wore a shirt that says "follow the duck". & the song goes "the duck walked up to the lemonade stand and he said to the man runnin the stand, 'hey… got any grapes?'" are there or are there not grapes on the cover of double dare

Parx fans know by now that there’s usually some correlation between everything the band does. During one of the band’s more recent promo photos for the FANDOM era, it was noted that drummer Otto Wood was wearing a shirt that said “Follow the duck.” It didn’t take long for fans to link it to a previously released track and Double Dare.

6. The green era was planned even before Double Dare

Waterparks had previously revealed that the “green everything” era had been planned even before the debut studio album. The album’s first single, “Stupid For You,” even contains the lyrics “You’re yellow, I’m natural blue/Let’s get together and be green like my insides.”

7. Double Dare is referenced on Entertainment, but some are missed

“SAD GAME” IS A SUPER DARK DEMO AND IS A MAJOR KEY LYRIC IN “PLUM ISLAND” BUT THAT’S A MISSED REFERENCE.

THERE WAS A SONG CALLED DOUBLE DARE. ALSO ONE CALLED ENTERTAINMENT.

BURN THE REST OF TWO DARES = DESTROY ALL OF DOUBLE DARE. MEANING ALL THE SONGS, THE PHYSICAL COPIES OF THE ALBUMS, FEELINGS, AND EVERYTHING ELSE FROM THAT ERA.

We’re still hoping to hear some of these unreleased demos in the future so we can continue to connect the dots to previous albums.

8. Knight revealed the album title prior to the announcement

LET'S TALK ABOUT HOW I WORE A DOUBLE DARE SHIRT AT OUR LONDON HEADLINER SHOW IN MAY BC I LOVE CUTE FORESHADOWING. pic.twitter.com/qUWQAoOIYZ

Back in May, Knight donned a “Double Dare” T-shirt during their headlining London show in May 2016. Double Dare was announced a few months later in August.

9. The band dropped numerous track title names during an interview on Warped Tour

when you realize @waterparks was dropping hints about double dare all along https://t.co/nwJC3rISzs @awsten @underscoregeoff 👀👀👀

Parx finished recording Double Dare right before they were set to head out on the 2016 Warped Tour. With the tracklist already set, the band couldn’t seem to help themselves from unloading several song titles at the end of an interview with Stage Right Secrets.

10. Knight teased his neon green hair to AP in February 2016

i think about this every fucking day like in double dare era awsten said the next hair color was gonna be green or purple and he already DID purple like sir… pic.twitter.com/A3wMZ3ar0i

Speaking with AP in 2016 for a “5 things you should know about Waterparks before they get big” piece, Knight stated that his next hair color would be purple or green. After later doing purple for the Entertainment era, green was the next one on the list.