Ariana Grande teases another ‘Mean Girls’-inspired look for “thank u, next” video

Ariana Grande as Regina George is everything.

Earlier this week, Ariana Grande began teasing fans with behind-the-scenes images from the “thank u, next” video set. From the Burn Book-like single art to her social media posts, all signs pointed to Mean Girls being the main inspiration.

However, the singer then dropped Legally Blonde, 13 Going On 30 and Bring It On homages. Now, she’s taking to Instagram to reveal another photo from the set ahead of the video’s to be announced release.

Read more: Macy’s apologizes for all of the Thanksgiving Day Parade lip-syncing

Grande first posted an image of her hiding behind her own version of the Burn Book, emblazoned with her single’s title.

She then posted her full Regina George-inspired look, complete with a blonde wig and necklace just like the cult classic’s queen bee.

This week, Grande took to her Instagram story to state 13 Going On 30 was the third film inspiring her looks but there was still a fourth to be revealed. 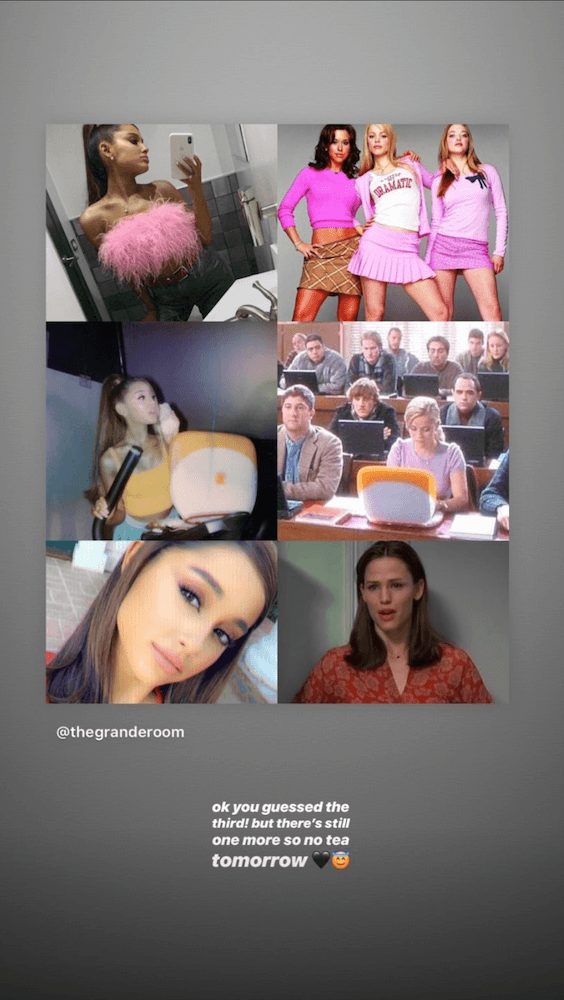 Over the last two days, Grande treated fans to the reveal of the fourth film, Bring It On. The first image came with the iconic quote, “‪I transferred from Los Angeles, your school has no gymnastics team this issaalast resort …….. ok i’ve never cheered before so what?”

‪‘i transferred from los angeles, your school has no gymnastics team this issaalast resort …….. ok i’ve never cheered before so what?’‬ #thankunext

She also shared a snap of the East Compton Clovers.

What do you think of Ariana Grande’s rom-com-inspired “thank u, next” video? Sound off in the comments below!