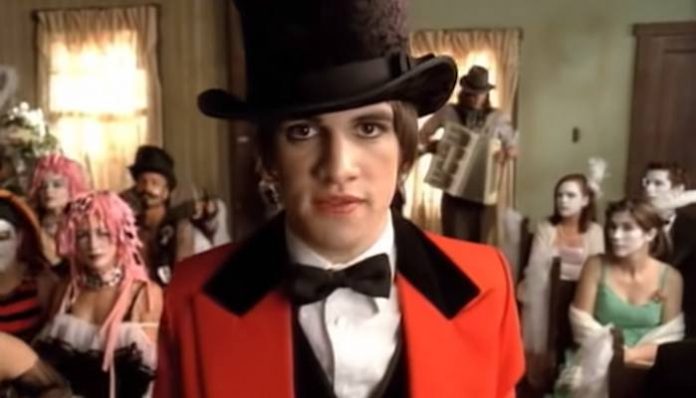 Brendon Urie is making dreams come true one engaged couple at a time. One Panic! At The Disco fan got the surprise of her life when the frontman actually responded to a letter she sent.

While past fans have pondered the cost to have Urie perform at their wedding (Answer: beer), Twitter user Erica Veon just wanted to let the singer know how much he’s impacted her. Veon sent Urie an invite along with a letter on “how much his music means” to her.

In the letter, Veon asks Urie if he’ll send back his autograph as a wedding gift, and Urie (who also marked he had to regretfully decline) was happy to oblige. Check out Veon’s tweet and photo below.

“Sent this wedding invitation [with] no expectations of him coming,” Veon tweeted. “But wrote a little letter about being a fan since ’05, how much his music means to me & how amazing an autograph would be as a wedding gift & YOU GUYS! Thank you”

Sent this wedding invitation w/ no expectations of him coming, but wrote a little letter about being a fan since '05, how much his music means to me & how amazing an autograph would be as a wedding gift & YOU GUYS! Thank you🥰 @brendonurie @PanicAtTheDisco #brendonurie @AltPress pic.twitter.com/JeDlMpQyh3

This isn’t the first time a Panic! At The Disco fan has requested Urie’s autograph as a wedding gift. Back in November, the band’s tour manager Zack Hall shared an image of a couple’s Star Wars-themed invite for a ceremony appropriately falling on May 4.

“Hey Laura & Ryan, somehow this got sent back in the mail but we all hope you had a great wedding and may the fourth always be with you. #fanmailfromaflounder”

Hey Laura & Ryan, somehow this got sent back in the mail but we all hope you had a great wedding and may the fourth always be with you. #fanmailfromaflounder

A lot of fans try to send gifts and letters to Panic! At The Disco or ask Urie to sign some items. To make sure everyone has a chance to get presents noticed, Hall shared some tips and guidelines last year.

In a series of tweets, Hall shared what he expects from fans, the presents he gets rid of, and answered some questions.

To begin with: Yes, some gifts are thrown away. Why?

“You have to understand he gets hundreds of thousands of gifts & drawings & just crazy things,” Hall explains. “He would literally have to buy a house just to store these things.”

You have to understand he gets hundreds of thousands of gifts & drawings & just crazy things. He CAN’T keep it all. It’s not possible. He would literally have to buy a house just to store these things. So if YOU make something & YOU love it, just send him a picture of it. PLEASE

However, they take pictures of the letters and artwork fans send.

He also shared that asking Urie to write lyrics can go very well if you’re lucky and the singer sees the note before his tour manager does.

Asking him to write out lyrics is a gamble. If he gets to it before I see it he does sometimes. But if I see it first, I will toss it. It’s the same as multi signatures. It just take too much time and there are a lot of things to try and get to.

And finally, Hall made a list of do’s and don’ts:

If you want to send Urie some fan mail (or return a stolen APMAs trophy), the address to do so is below: