Cady Groves has passed away at the age of 30

The singer’s brother Cody shared the news on social media.

Cady Groves has passed away at the age of 30. The singer’s brother Cody Groves shared the news on Twitter Sunday.

In the tweet, Cody states that “details are limited” and the family is currently trying to obtain more information. He also pays tribute to their late siblings Casey and Kelly.

“@cadygroves has left this world,” Cody writes. “Details are limited right now but family is trying to get them and will keep people updated. Rest In Peace little sis. Hope you’re reunited with @kellydgroves and Casey.”

@cadygroves has left this world. Details are limited right now but family is trying to get them and will keep people updated. Rest In Peace little sis. Hope you’re reunited with @kellydgroves and Casey. pic.twitter.com/l4S3tqWYFy

The cause of death was initially unknown, but Cady’s brother Cody has since taken to Twitter to share another update on the vocalist’s passing. In the new post, Cody says that an autopsy report shows Cady died of natural causes. While testing is still being done, Cody believes it is related to undisclosed health problems she endured last year.

“I hate that I even have to do this, but apparently the world and Internet is a cluster of twisted misinformation,” Cody writes in a private Facebook post screenshotted for Twitter. “In my original post, I had stated we had no information to try and prevent that, but to expel rumors, I will provide an update.

“The medical examiner has completed [the] autopsy, and there was no indication of foul play or self-harm. Simply put, Cady Groves died of natural causes. She had some medical problems last fall and our best guess at this point until further testing is complete is that they resurfaced. Please respect her name and family before sharing information that did not come directly from here.

“Carol Petitt and I are a little over halfway to Nashville and basically running on adrenaline and caffeine. Cady was really looking forward to the next few months and release of her new album. Our latest in-depth conversation (since most were witty banter) was her sending me songs to critique and give feedback on.”

Since Tweets are limited… pic.twitter.com/Ad3bhfegI5

According to her friend and Time magazine West Coast Editor Sam Lansky, Cady passed away Saturday.

“I talked to her last week, and she sent me new mixes of songs she was getting ready to release; they were so good,” Lansky writes alongside a collection of photos. “I’m so grateful that in my last communication with her, I got to tell her that I loved her. But I will miss her terribly. I hope the world remembers her for the fierce spirit and rare talent she was.”

Debby Ryan commented on Lansky’s tribute by sharing her own.

“I love you,” Ryan writes. “Very grateful for the time I had with Cady and with you two. effervescence personified and a sweet gift within our journeys to’ve fallen apart together, in three different ways.” 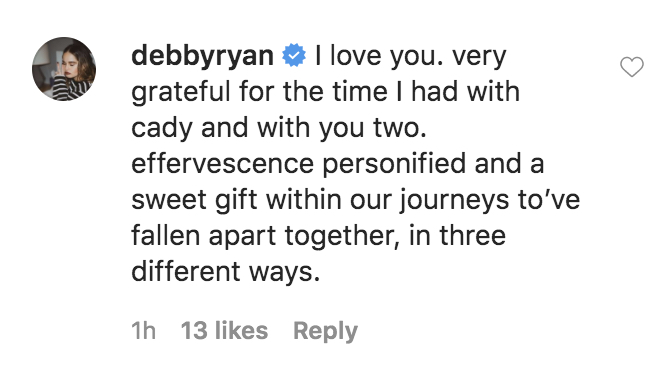 The vocalist’s last post on social media includes several Boomerangs on April 23 where she gave an update on life at home.

Slide #1: HEY GUYS! It’s been a hot minute since we talked. And although I’m pretty sure I’m going batshit crazy in my house for week 7…I figured I’d update you on what I’ve been up to! Slide #2: wait a sec gimme a kiss y’all buttheads I miss you. No frenchers though I’m a lady.

Slide 3: I listened to the entire Britney Spears …Baby One More Time album before my 7th morning snack. Slide #4: then I sat around and stared out the window at the rain while waiting until it was socially acceptable to eat another snack. Slide #5: now I’m reading a book in my living room. That I’ve already read twice.

Fellow artists have begun paying tribute to the vocalist including Nate Blasdell (I Set My Friends On Fire), Brian Logan Dales (The Summer Set), Alexander DeLeon (The Cab, Bohnes) and SayWeCanFly.

man. i just saw @cadygroves at the airport. She gave me the biggest hug I’ve ever received in my life. You were my little sister, Cady. I can’t believe that you’re gone. Rest easy, My friend.

I’ve never worked with any songwriter who could open a vein and get vulnerable the way Cady Groves could. We wrote a lot of songs together for a while and I was inspired by her time after time. A truly underestimated masterclass of talent. Rest In Peace, old friend.

The Ready Set and Stephen Jerzak also shared tributes. Cady joined the Ready Set and Christofer Drew for the holiday song “The Blizzard Of ’89” in 2009. She also teamed up with Jerzak for a collab in 2010, “Better Than Better Could Ever Be.”

So heartbroken to hear that my friend @cadygroves has passed away. Rest In Peace 😞

In addition to collabs with the Ready Set and Jerzak, Cady was known for teaming up with Trevor Dahl (now of Cheat Codes), who also paid tribute. The duo worked together on “Oh Darling,” a song released on his former project Plug In Stereo’s Nothing To Something LP in 2011.

Read more: This member of Top 40 trio Cheat Codes got his start in the scene

i’m so so sad to find out about the passing of @cadygroves 💔 will miss her very much. the music we made together completely changed my life.

Cady released her debut EP, A Month Of Sundays, in 2009. She followed it up with three more EPs: 2010’s The Life Of A Pirate, 2012’s This Little Girl and 2015’s Dreams. The collections featured several notable singles including “This Little Girl,” “We’re The Shit” and “Love Actually.”

Throughout her career, Cady hit the road with many scene favorites including the stacked 2010 Bamboozle Roadshow alongside All Time Low, Boys Like Girls, LMFAO, Good Charlotte and Third Eye Blind. Following that run, she supported the Downtown Fiction on the Let’s Be Animals tour in 2011 and Hot Chelle Rae on the Beautiful Freaks tour in 2012.

She released a music video for “Oil And Water” in October 2017, which marks her most recent single. You can see it below.

This post will be updated should any additional information become available. Our thoughts are with Cady Groves’ family and friends at this time.