We’ve already seen the first poster and the creepy Chucky-inspired website, so it only makes sense the new film would launch blood-soaked e-cards and wallpapers.

The Child’s Play twitter announced the new festive items, which are available on their equally as festive website: BestBuddi.com.

“Make your holidays even brighter with Buddi! Visit our holiday-edition website for festive new exclusives including sharable e-cards, phone backgrounds, and other seasonal surprises. Follow along all week for new updates!”

Make your holidays even brighter with Buddi! Visit our holiday-edition website for festive new exclusives including sharable e-cards, phone backgrounds, and other seasonal surprises. Follow along all week for new updates! https://t.co/W8AD0cYrxa #YourBestBuddi #ChildsPlayMovie pic.twitter.com/sMNnq58heQ

Once you click through to the website, everything is presented via Kaslan Corp, the makers of Buddi (aka the updated Chucky doll).

There’s a Buddi Announcement, which is a letter from president and founder Henry Kaslan introducing the “most cutting edge, technologically advanced Kaslan product to date.”

The Kaslan Corp page itself is filled with a holiday-centric ad for the Buddi doll.

The Child’s Play Twitter posted a similar ad to their page.

Spend your holidays with your best Buddi! With Kaslan Corp’s revolutionary “always-on” technology, Buddi will capture every moment of your holiday festivities. Pre-order your Buddi here: https://t.co/W8AD0dg2oI #YourBestBuddi #ChildsPlayMovie pic.twitter.com/9qsdQ6sRSb

From that page, you can select Buddi Wallpapers with the option to download them to your phone. 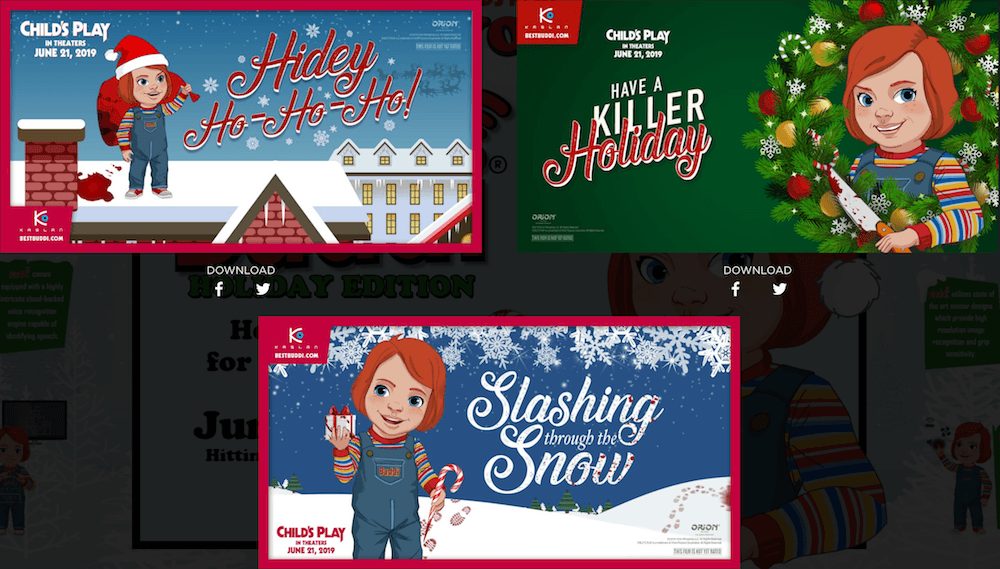 Check out the full list of holiday-inspired media here.

What we know about Child’s Play so far

Back in July, it was revealed that a Child’s Play reboot was in the works, and now we have a look at the film’s first poster.

It producers David Katzenberg and Seth Grahame-Smith are set to produce the movie. Lars Klevberg will direct the film and Tyler Burton Smith will write the script. Production reportedly started in September in Vancouver, Canada.

According to Collider, there’s not a lot of information on movie yet, but there are some hints about the plot. It will be a contemporary reboot, which involves a group of kids and “a technologically-advanced doll that enters their world.”

Child’s Play hits theaters June 21, 2019, which just happens to be the same day Toy Story 4 drops. So be prepared for a lot of toys coming to life.

Check out the first poster below.

“Every child in America deserves a best friend, so we built one.” – Henry Kaslan. Introducing Buddi! He’s more than just a toy, he’s your best friend. Meet him on June 21, 2019. #ChildsPlayMovie pic.twitter.com/nwU6JdY1KF