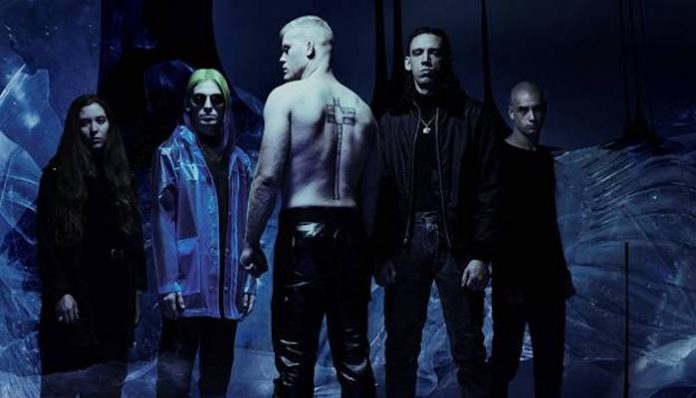 Code Orange are backing up their forthcoming fourth album UNDERNEATH with a slew of tour dates. Deemed the UNDERNEATHTHESKIN­_TOUR, the band will hit the road at the end of March with Show Me The Body, Jesus Piece, Year Of The Knife and Machine Girl.

The run begins March 30 in Boston with several festival appearances throughout before wrapping May 17 in Columbus.

Code Orange released a handful of singles last year including “The Fiend” Bray Wyatt’s WWE entrance music, “Let Me In” in August. The following month, the band also teamed up with rappers Injury Reserve and JPEGMAFIA on “HPNGC”

This year, they kicked off their followup to 2017’s FOREVER with the release of the first single and title track “Underneath.” For this record, the band hit the studio with producers Morgan and Nick Raskulinecz and Will Yip with additional programming by Chris Vrenna. Yip also mixed the record with Code Orange guitarist Eric ‘Shade’ Balderose.
UNDERNEATH preorders include limited vinyl colorways, which are available here ahead of its March 13 release via Roadrunner. Check out the new song below.

Code Orange will also be playing several festivals during this run. Coachella is up first on April 10 and 17 where they’ll perform alongside headliners Rage Against The Machine (who previously teased it themselves), Frank Ocean and Travis Scott.

BROCKHAMPTON, Charli XCX, Kim Petras, PUP, the Regrettes and Beach Bunny will be playing alongside Code Orange on those specific days.

Code Orange will also hit three Danny Wimmer Presents events including Epicenter Festival in South Carolina, Welcome To Rockville in Florida and Sonic Temple Festival in Ohio, all of which are headlined by dual sets from Metallica.

Check out the full upcoming list of dates below, which includes Coachella, Epicenter Festival, Welcome To Rockville and Sonic Temple Festival.