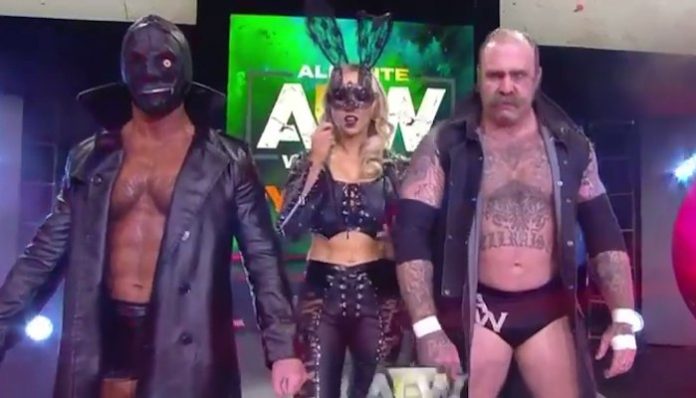 Every Time I Die guitarist Andy Williams won his first All Elite Wrestling match on the show that aired on TNT.

Andy “The Butcher” Williams has been in the ring for a few years now. In June 2015, he took on pro-wrestler TARIK, who didn’t stand a chance against the musician. That same week, the guitarist went up against Jimmy Havoc at Download Fest, where he powerbombed the wrestler through a table.

In 2017, Williams became a tag team champion when he and Jesse “Braxton Sutter” Guilmette (aka The Blade) took down the Upper Echelon tag team at the Pro Wrestling Rampage event in Erie, PA.

On Nov. 27, the team blindisided All Elite Wrestling Executive Vice President Cody Rhodes on the wresting company’s AEW Dynamite. They were joined by Laura Dennis (Allie, The Bunny) and met with boos from the crowd.

Then, on Wednesday, the crew fought against Rhodes and Q.T. Marshall. When they appeared on-screen, fans were pumped for the upcoming action.

🔪⚔️🐰 are here to cut the head off of the 🐍 #AEWDynamite pic.twitter.com/xajODcI1Nc

So, is that @andycomplains playing guitar for BBB’s entrance music? Song was fire!!! @MikeyRukus#AEWDynamite

After that, the match began, and it got pretty heated right away.

However, the Butcher & the Blade were seriously taking down QT Marshall as the match went on.

Finally, the crew came out victorious, and needless to say, fans were excited.

The Butcher and Blade with the win! Hell yeah @andycomplains pic.twitter.com/VkScAIgqoE

.@BraxtonSutter connects with a Stunner and @andycomplains hits a Clothesline on QT Blade and Butcher got their first win in #AEW and #AEWDynamite pic.twitter.com/u7eC2zvjkf

Guys @andycomplains is on #AEWDynamite that is all that matters in life.

I cannot express how happy it makes me to see @andycomplains on television for wrestling. #AEWDynamite

The tag team will also be making an appearance at Every Time I Die’s ‘Tid The Season holiday show on December 13 and 14 at Buffalo Riverworks. They’re continuing their tradition of hosting wrestling matches on the 14th which the duo will participate in.

What did you think of the Every Time I Die guitarist’s first-ever wrestling match on AEW? Let us know your thoughts in the comments below.