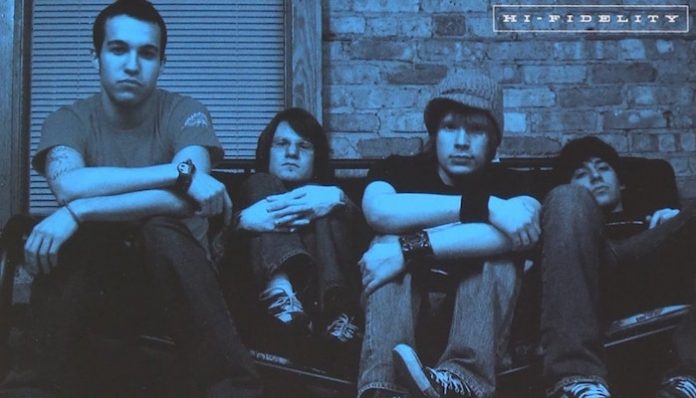 Fall Out Boy formed in 2001 and, barring a four-year hiatus in 2009, would be going on nearly 20 years of bandhood. 2003 marked the year of their first record release with Take This To Your Grave.

While From Under The Cork Tree is seen as their breakthrough record, TTTYG is an incredible glimpse at the sonic growth from where they started. The original pressing of the album is a beautiful peek at nostalgia in the form of band member baseball cards and tons of other neat mementos.

2003 was an incredible time. The Lizzie McGuire Movie came out, as did Freaky Friday and the Cheetah Girls. Harry Potter And The Order Of The Phoenix, the fifth book in J.K. Rowling’s series dropped, Beyoncé made her incredible solo debut and Charlie’s Angels: Full Throttle captivated audiences.

But, in the world of emo. Fall Out boy dropped Take This To Your Grave and My Chemical Romance signed with Reprise Records before dropping the jaw-dropping record Three Cheers For Sweet Revenge.

The former record is what we’re focused on here. Thanks to Dollar Signs guitarist Tommy McPhail, we get a little time portal back to 2003 in what is one of the coolest pieces of merch we’ve ever seen. The original pressing Fall Out Boy’s TTTYG featured an alternate cover and fact-filled baseball cards of each member. Enjoy the journey below.

Read More: Fall Out Boy members make fun of their own band on comedy metal album

First we start with the alternate cover. It features someone sleeping in a messy bedroom with band posters adorning the walls. In addition to describing themselves as “Softcore” the band also claims an affinity for Taco Bell, making fun of people, and ruining towns in the Midwest.

First up, the infamous bedroom cover (1/6)

RIP all those Midwest towns. Was @FeedTheBeat a thing in 2003? Either way, A+ @tacobell mention. pic.twitter.com/XibGNtd4gj

Next we arrive at the awesome baseball cards. We’ll start with Andy Hurley. Oh how we miss that hairstyle. Hurley includes a Lord Of The Rings quote, in addition to citing as one of his favorite movies. He also goes by t-rexxx and loves Mountain Dew.

His “into” list describes every single person I grew up with in Wisconsin.

His drink of choice? Top-notch.

There’s layers to this game. pic.twitter.com/NBkP63DDxg

Joe Trohman is up next. Trohman doesn’t include a birthday, he’s 19 and says non-alcholic beer is his favorite beverage and also cites Lord of The Rings as one of his favorites.

So many reasons why this is my favorite trading card. Note the lack of birthdate. So mysterious. Likewise, that bev pick? Incredible. He was 19 in this.

Read More: Fall Out Boy fans should listen to these records made by heroes & stans

Then, the most contentious one, @PatrickStump (4/6)

When Patrick signed this, he laughed about “the intern that spelled his name like that,” an immortal moment in FOB history.

That said, Pibb is the BEST & quiet IS the new loud. Ahead of his time, always. pic.twitter.com/8JTIByeTup

Pete Wentz claims to have saved Latin which is very impressive. Wentz, who has no nickname also was born during the death of disco. He loves straight edge, girls jeans, and drinking molotov cocktails.

Rounding out the band cards is the saver of Latin himself, @petewentz (5/6)

$20 says that batting average could make a helluva hook.

Read More: Can you ace this Fall Out Boy ‘Infinity On High’ quiz?

The band promo and record itself just add to this glory. We see some of the most famous people in the world in their late teens and early twenties looking super awkward.

Overall, these trading cards are an incredible addition to the classic album. They capture the band as they were at the beginning of a dense and storied career – nervous, hilarious, and just like the rest of us, kids with dreams. pic.twitter.com/rCCr1eJE8y

We love every bit of this piece of nostalgia. If you want more Fall Out Boy content, check out the Hella Mega Tour with them, Green Day and Weezer. It’s sure to be great. Dates are below.

Read More: Against Me! reveal spring co-headlining tour with Baroness

What do you think of this awesome piece of Fall Out Boy memorabilia? Sound off below!