Fearless Records has been holding it down in the scene and beyond since 1994. The label is celebrating their 25 years of working with many of your favorite artists with the release of a new seven-inch series.

Throughout 2019, they’ll be announcing a new pressing on the 25th of each month, and AP is sharing exclusively what the first release will be.

“2019 is going to be wild,” Fearless President and Chief Creative Officer Jenny Reader says. “Not only is it shaping up to be our biggest release year yet, but it’s also Fearless’ 25th anniversary as a label. We are so incredibly excited to start unveiling all the insane things we will be doing to celebrate the label’s legacy, our incredible artists and fans.”

Reader explains that the seven-inch series will honor some of the most popular songs from current artists and alumni. The label worked with them to create a unique product that displays curated artwork and includes classic tracks, unreleased songs from their archives and new material.

Plain White T’s are kicking off this special seven-inch series with a “Hey There Delilah” and “Light Up The Room” split. The artwork is also custom created by the band.

Mega-hit “Hey There Delilah” appears on the band’s 2005 full-length All That We Needed. “Light Up The Room” is on their most recent LP, Parallel Universe, which dropped in 2018—both of which were released via Fearless Records.

“Of course, we had to start with ‘Hey There Delilah,’” Reader says. “Few bands can claim a four-times platinum, Grammy-nominated release that transcended into the fabric of pop culture. So much respect to the band and to [Fearless Founder and Chairman Emeritus] Bob [Becker] for believing in the song to allow it so much success and love. It is still magic each time they play it, and I don’t think that will ever fade.” 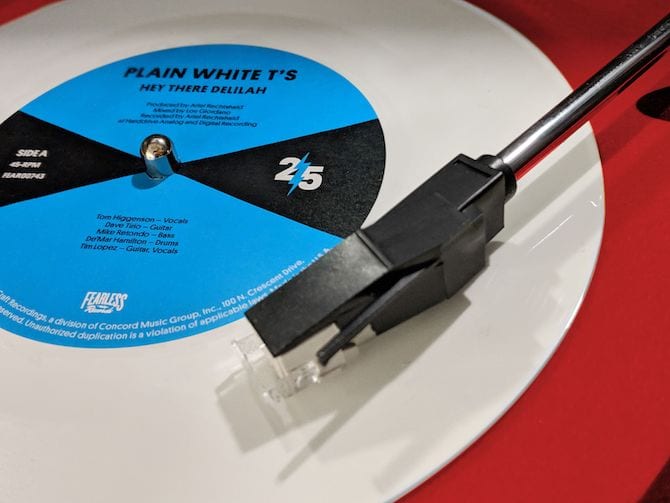 There is no further information on other artists at this time as part of what makes this series special is its release plan.

While the label currently houses August Burns Red, Grayscale, iDKHOW, Ice Nine Kills, Movements, Real Friends, Set It Off and Underoath among others, past artists are also returning to work with the label on this.

Throughout its 25 years, Fearless has also worked with Blessthefall, Breathe Carolina, Eve 6, Every Avenue, Forever The Sickest Kids, Gatsby’s American Dream, Mayday Parade, Motionless In White, the Maine, the Summer Set, Tonight Alive and so many more.

So, in short, the possibilities are endless, and there’s really no telling who could be returning to work with the label on future exclusive pressings. Stay tuned for more information, and you can pick up Plain White T’s seven-inch at this link.