Rolling Stone Magazine has unveiled its update 500 Best Albums of All Time list.

This past month, Rolling Stone Magazine unveiled its new and improved 500 Best Albums Of All Time list. The list includes releases from various artists including My Chemical Romance.

Now, Frank Iero is reacting to this classic MCR album being named of the best albums of all time.

Read more: Conjure up the Sanderson Sisters with a ‘Hocus Pocus’ Starbucks drink

Rolling Stone‘s new 500 Best Albums Of All Time list includes a diverse group of releases from artists such as Harry Styles, Arcade Fire, the Beatles and Sonic Youth. As well, My Chemical Romance are included on the list.

Their iconic album The Black Parade has officially been named one of the best albums of all time. The album, unfortunately, isn’t ranked No.1 on Rolling Stone‘s updated list. However, it comes in at the 361st spot.

“Just as the Who did with Tommy, or Pink Floyd with The Wall, New Jersey act My Chemical Romance served up an era-defining rock opera, tailored for the golden age of emo,” the Rolling Stone review says. “Frontman Gerard Way — the goth millennial answer to David Bowie — stars as a cancer patient who marches boldly into the afterlife (“The Black Parade”), where Liza Minelli, of all people, awaits him for a smashing horror-punk duet (“Mama”).”

Iero shared the accomplishment on his Instagram story this week. 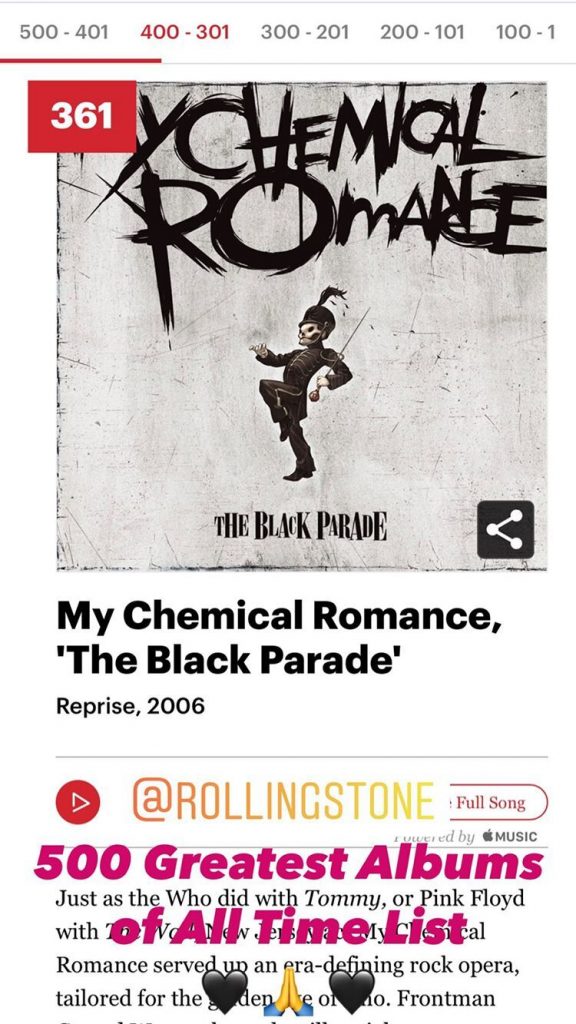 The Black Parade remains one of my MCR’s most successful albums to date. Earlier this month, the heartbreak hit “I Don’t Love You” was officially certified silver in the U.K. after surpassing the equivalent of 200,000 sales. The song joins various other certified Black Parade tracks.

Read more: Is there a nod to ‘Hill House’ in the first unsettling ‘Bly Manor’ trailer?

In other My Chemical Romance news, a video of Way performing “First Date” with blink-182 nearly a decade ago recently resurfaced. The video from the 2011 Honda Civic Tour is truly the nostalgic live music moment we needed.

As well, Way and Shaun Simon just unveiled the first pages from their upcoming Killjoys comic National Anthem. The exclusive look shows just where Mike Milligram‘s story continues as he handles a typical day’s work and a heated confrontation at a bar.

Is Black Parade your favorite My Chemical Romance album? Do you think it should be higher on Rolling Stone‘s list? Let us know in the comments below.