We really hope this is real.

Green Day‘s newest album tracklisting might have been leaked online. A fan of the group claims he was sent the Father Of All… vinyl sleeve in the mail from someone in California, which is where the band is based.

He also posted a photo of the back of the supposed album artwork featuring the names of the songs.

The fan, Jason, posted to Greendayfan.com saying that he was surprised by a gift from Green Day in the mail.

“Imagine my surprise when an anonymous package, postmarked from California, arrived in my mailbox containing the album we’ve all been waiting for, Green Day’s  Father Of All Motherfuckers which isn’t due out until February 7, 2020,” the post reads. Alas, my initial excitement was only slightly dampened when it turned out the package contained just the vinyl sleeve for Green Day’s 13th studio album and did not include any type of insert, but I certainly wasn’t complaining.” 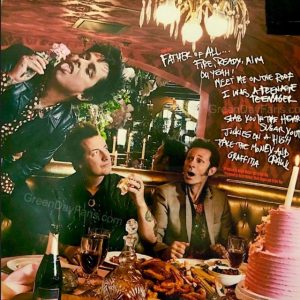 The band previously dropped “Father Of All…” and “Fire, Ready, Aim” as singles, but the supposed tracklisting contains a few names we haven’t heard yet such as “Oh Yeah!” “Take The Money And Crawl” and “Graffitia.”

Check out the tracklist below.

Father Of All… Tracklist:

Green Day have not confirmed if this is the actual listing.

The official album drops Feb. 7, and pre-order is available here.

The band embark on the Hella Mega Tour later this year with Fall Out Boy and Weezer.

The tour kicks off June 13 in Paris and will run throughout Europe, the U.K. and North America with the Interrupters as support. Green Day will be prefacing the tour with solo appearances in Europe and Asia. Tickets are available here.

What do you think of Green Day’s rumored Father Of All… tracklisting? Let us know in the comments below!