Talk about a legendary performance.

Sleeping With Sirens have been hard at work on their new album (and torturing us with teaser-content in the process). While the band might only have a couple Warped Tour 25th anniversary show on the books for the rest of the year so far, that’s not to say Kellin Quinn won’t be picking up the mic.

The frontman popped up at an Oregon band’s gig in a local coffee shop, and it was about as epic as you’d imagine.

Yesterday, Ghost Kings took to their Instagram to announce that they were at a Dutch Bros. coffee shop to play a show. The band shared a quick clip of them setting up with the caption, “private show for @dutchbroscoffee tonight.” 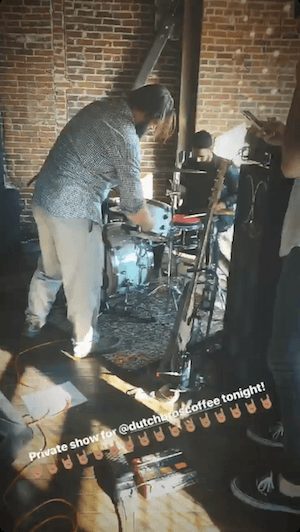 Later in the night, the band revealed that a special guest joined them for part of the set. Quinn took to the stage to offer up some vocal assistance, and it’s definitely giving off that heavier vibe the band promised on this upcoming album.

SWS fans might not recognize the track and have their fingers crossed that this was a new snippet of what’s to come. While the track is indeed unreleased, it’s actually not by SWS but rather Ghost Kings, SWS’s team confirmed with AP.

It’s unclear exactly how Quinn ended up onstage with the band at the private show as neither he nor the members have divulged that information, but we’re here for it either way.

UPDATE: Quinn replied to AP’s tweet about this performance and let us know that it’s his friend’s band. Check out the clips below.

More on Sleeping With Sirens

It’s obvious that Sleeping With Sirens are getting quite a kick out of torturing us with small, tiny, details of their upcoming album. Fans have been on the edge of their seats with each little tease, hoping one of them will eventually lead to a sneak peek of a song, release date,  SOMETHING.

Now, guitarist Jack Fowler has taken to Instagram to continue that teasing. This is emotional torture. For real.

Last week, Quinn updated fans about the next SWS album, and it sounds like it’s coming soon.

The vocalist told fans that drummer Gabe Barham was working on his parts and the rest was basically done.

Update on our record! @gabebarham is finishing drums soon.. guitars, bass and vocals are done.. then it’s off to mix and master.. we’re getting close!

Now, to continue with the torture, Jack Fowler has taken to Instagram to drive fans even further into insanity.

“See this face……This is the face i make listening to new songs knowing you can’t hear them yet.”

Sleeping With Sirens are playing are playing the Atlantic City and Mountain View Warped Tour dates this summer. More information is available here.