Could this be something more than just a photo of practice?

My Chemical Romance are in the midst of one of the largest comeback of all time. But as of yet, they’ve only played one show since breaking up in 2013. It makes sense that they’re now practicing a lot to put on the best show possible. Well, Frank Iero gave us a little peek at his practice setup, or “portal” as he calls it.

The word “portal” is particularly suspect considering some current theories floating around about a new My Chemical Romance album.

When My Chemical Romance announced their return on Halloween of 2019, one would think the world would burn down. Emos came flooding out of corporate offices and kindergartens alike to celebrate the return of our gods.

It has been a whirlwind of news scraps and teases and theories since then. All we have to work off is one show at the Shrine in Los Angeles, California where they absolutely blew the roof off with one of the greatest sets of all time.

We’ve had what feels like one thousand teasers that led up to three U.K. shows, and then European tour of sorts and then more teasers that finally led to the memento-packed “A summoning…” video that announced a U.S. tour. All three Milton Keynes U.K. show sold out immediately and the U.S. tour sold out entirely in six hours.

Read More: Frank Iero on the year after the accident, roasting fans and more

Sure, it’s a bunch of cool guitars, but we see those from musicians all the time. The interesting thing here is the word “portal.” Fans have speculated a lot about the use of keywords and symbols by the group. Magic or magical, portal, and other words of the sort have been used by MCR far more often than called for in usual context.

Back when “An Offering…” dropped, portals became a central theory for the next era of My Chemical Romance.

One post points out that the figure in the video has a cross on the back of his robe up until he stabs the pentagram with the dagger, at which point the next shot shows there is not a cross. They ponder if it is just inconsistency in the video or has meaning behind it. Knowing My Chemical Romance, we’re certain that there is no miscalculation or mistake so there has to be meaning. Reddit u/VaxisnateYourKids alleges it could represent portals.

“My fiancee believes the ritual is to open up some sort of portal to another dimension. So when they don’t have the cross, they are on the other side.”

A ton of theories note that time travel and other dimensions will play a significant role in this new era. Especially after the time-traveling blog post and Merlin theories.

In “A summoning…” the protagonist goes through different doors that are portals to the next My Chemical Romance era. Thanks to Frank, it seems we now have a bit more evidence, albeit useless, that a new MCR-era is upon us.

Other notable musicians commented on Iero’s post regarding the actual guitars. Laura Jane Grace of Against Me! and punk icon Dave Hause both inquired about individual instruments. 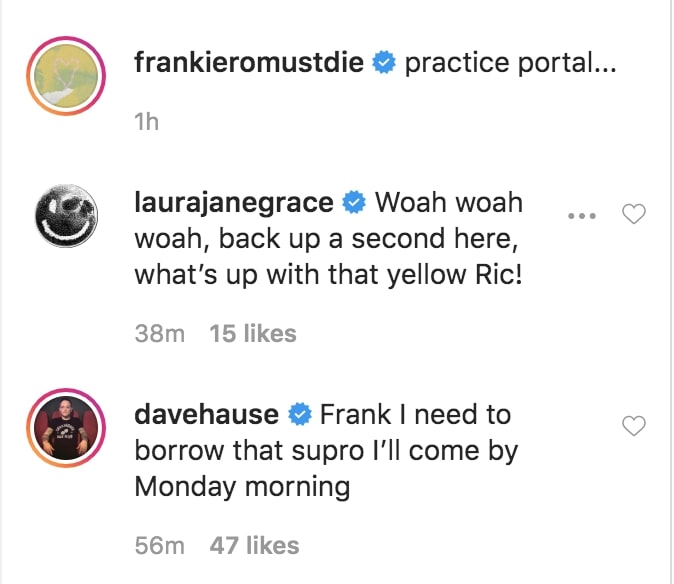 The only thing we’re a bit bummed out about is that Iero doesn’t show his signature Epiphone Wilshire Phant-O-Matic in the photo. Fingers crossed it’s in his hands.

You can check out the entire list of upcoming My Chemical Romance dates below.

What do you think this picture means? Tell us your theories in the comments below!