The band and the film have made an amazing shirt.

Everyone is celebrating the theatrical release of Captain Marvel, including Nine Inch Nails apparently.

The band has released limited edition t-shirt in collaboration with Marvel.

The idea came from Marvel, who approached the band about the collab. The idea behind it is that the main character Carol (Brie Larson) wears one of the band’s t-shirts throughout the film.

You can see her sporting that in the tweet below.

The shirt design is pretty to-die-for. You can also check out what the that looks like below. 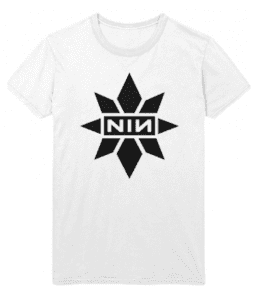 The shirts cost $25 and are available for preorder here. The shirts are expected to ship March 25.

In other news, Captain Marvel features some of our favorite ‘90s tracks from artists like Nirvana, Garbage and No Doubt.

Also, the movie apparently has an adorable tribute to Stan Lee that will bring viewers to tears. Critics have already boasted rave reviews in regards to the film, which has one of the last cameos from Lee.

Now, the directors Anna Boden and Ryan Fleck have confirmed that the tribute will be “really emotional”.

“I don’t want to say anything I’m not supposed to say,” Boden tells comicbook.com. “But just that it was… we did want to kind of have a moment and tribute to Stan Lee in this movie, obviously. It was something that came from Marvel and when they showed it to us, there was not a dry eye in the house. It was really emotional.”

Fleck also chimed in on what it was like to work with Lee in regards to his cameos.

“You know it just, it felt right… When you look at the script and you’re like, ‘Where are we gonna put Stan Lee in this movie?,’ that seemed like the right place. Throw him into that scene.”

This tribute scene already sounds promising… and like a real tear-jerker.

In case you are as crazy about this film as we are, you can check out Larson and co-star Samuel L. Jackson do an amazing recreation of Lady Gaga and Bradley Cooper’s Oscar performance of “Shallow” below.

Captain Marvel is in theaters now.

What do you think of the Captain Marvel and Nine Inch Nails t-shirts? Sound off in the comments!