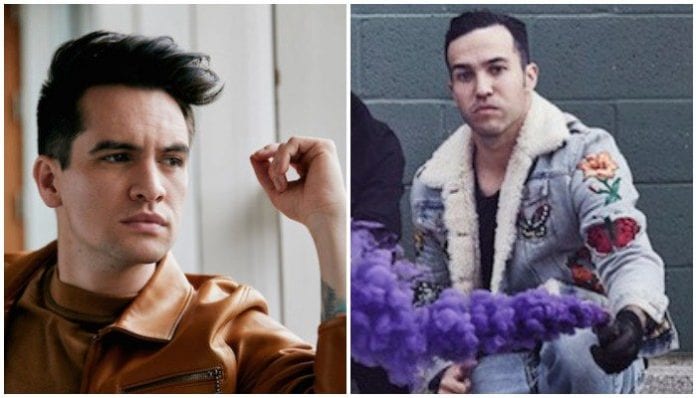 Panic! At The Disco have taken TikTok to the next level, this time dragging in Fall Out Boy bassist Pete Wentz into Beebo’s shenanigans.

Find out what happens when you don’t close the goddamn door, below.

You may recall when P!ATD put a Beebo spin on the viral “Mr. Sandman” trend back in August. Many referred to it as the TikTok from our nightmares and honestly, they weren’t wrong.

What dreams (or nightmares) are made of pic.twitter.com/KEnvb21tiJ

Now, it looks like Beebo is back, this time combining forces with Wentz to create a hilarious mashup titled “Dear Future Self, Close The Goddamn Door.”

The TikTok combines the new FOB track “Dear Future Self (Hands Up)” with iconic emo Panic! track “I Write Sins Not Tragedies.”

Clearly @PeteWentz didn’t get the memo about closing the goddamn door https://t.co/aMu9kug09q

The responses to this one did not disappoint.

if i see the puppet ONE MORE TIME

he’s from my chemical romance what to you expect

you interrupted me watching tik toks to have me watch more tik toks? okay

Panic! manager Zack Hall is denying fans’ guesses that Brendon Urie is the leopard on The Masked Singer.

To fill you in, the Fox competition show features celebrities who sing in different masks. Fans guess who is under the masks as the competition progresses until a winner is picked and reveals their identity.

The second season just got started, and one of the toughest characters for fans to figure out is the Leopard. While fans make guesses, some believe it could be Urie hiding under that mask.

Now, Hall has taken to Instagram to let fans know that it’s not Brendon Urie hiding under the mask. He also guessed that the character was actually Titus Burgess in disguise.

“Hahahah I just saw someone saying people think the leopard on @maskedsingerfox is @brendonurie …. Uh nah.. if I was to guess I would say it’s for 100% @instatituss . Prove me wrong,” Hall wrote.

Hahahah I just saw someone saying people think the leopard on @maskedsingerfox is @brendonurie …. Uh nah.. if I was to guess I would say it’s for 100% @instatituss . Prove me wrong.

While it looks like Panic! At The Disco aren’t involved with this season, at least we think, we’ll have to wait and find out who the identity of the mysterious leopard actually is.

The Masked Singer airs Wednesdays at 8 p.m. on Fox.