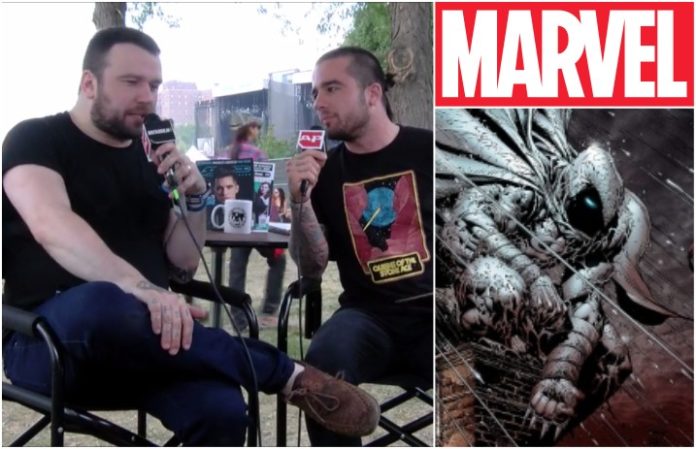 Say Anything's Max Bemis is filling in fans on his upcoming work—including a new comic book for Marvel and his band's new album—in a chat with APTV correspondent Stevie James at this year's Riot Fest. Watch the video below!

It looks like the end of 2017 will be busy for Bemis, as the musician and writer says he's preparing a new Moon Knight comic for Marvel Comics. Bemis has previously collaborated with Marvel on the Foolkiller and X-Men franchises.

In response to a fan question about a new comic from Bemis, the Say Anything frontman reveals his upcoming book with Marvel. “Right now, I'm working on a new one for Marvel Comics,” says Bemis. “Moon Knight, which is one of my favorite characters that I'm getting to write. But I'm sure I'll put out some more original ones that I come up with. … I'm having a lot of fun working for Marvel.”

Bemis also drops some hints about the next record from Say Anything. “I'm recording a new Say Anything record next month with Will Yip,” he says. “It should be a really fun record, definitely different in certain respects.”

Bemis' new Moon Knight comic is due out in November, the same month that Say Anything embark on the 10-year anniversary tour for their 2007 third album, In Defense Of The Genre—they'll be playing the full album (and others!) in its entirety. Check out the complete list of cities and dates here.

“We have this pretty crazy tour where we'll play all those records in succession,” Bemis says of the anniversary jaunt. “And then, next year, we'll obviously be on tour supporting that new record that I'll be making next month.”