Sleeping With Sirens have dropped a second video teaser ahead of their highly anticipated song release tonight. The video reveals what time we can expect the song to drop, making us even more anxious for the release.

Check out the latest teaser below!

The video follows the band wiping their social media accounts over the weekend.

To backtrack, the band caused a stir when fans noticed all five members — Kellin Quinn, Jack Fowler, Gabe Barham, Justin Hills and Nick Martin—completely deleted all posts from their feeds, as well as the band’s main account.

Now, a new teaser has emerged, revealing that the track will drop at midnight EST, 9:00 p.m. PST. At the end of the video the Sumerian Records logo appears—could the band have signed to a new label?

Quinn retweeted one fan, who asked if the band had signed to a new label.

The track has already surfaced in places where it is already midnight, with Quinn sharing fans’ Instagram story posts on his own.

It looks like the track is called “Leave It All Behind” hailing from the band’s forthcoming album, How It Feels To Be Lost. The album artwork matches the same aesthetic Quinn teased (and then deleted in his account wipe) last week. 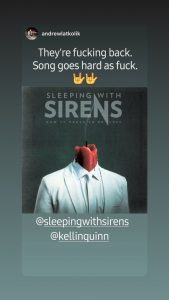 Earlier today, Quinn took to Twitter to share that he would be staying up to celebrate the release with fans.

Staying up til midnight to celebrate with y’all! Keep it up! I’ll try to reply to as many of you as I can! #leaveitallbehindsws

Are you excited for the new SWS track? Sound off in the comments below!