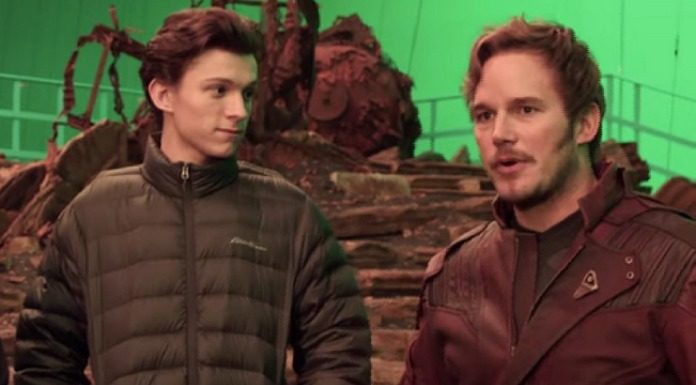 Spoiler-machine Tom Holland has struck again! In a recent interview with ET it was revealed that the Spider-man star knew the plot of Jurassic World: Fallen Kingdom before dino-star Chris Pratt… and SPOILED it.

If you’re an MCU fan like myself, you’re probably already aware that Tom Holland is notorious for spoiling the plots of movies he’s starred in long before they’re released. As it turns out, this bad habit goes beyond his own projects and extends to movies he’s not even a part of. The Infinity War star disclosed the plot of Jurassic World: Fallen Kingdom to the movie’s star Chris Pratt before he’d even had a chance to read the script.

Pratt told Entertainment Weekly during their Sirius XM radio show that Holland’s friendship with Fallen Kingdom director J.A. Bayona was what led to the massive spoiler.

“The first I heard about the plot was from Tom Holland, weirdly. I think I was shooting the sequel for Guardians of the Galaxy, maybe, and Tom was doing Spider-Man on the same lot… He said, ‘Hey mate, I just talked to J.A., mate, he told me the whole plot of the story,’ and I was like, ‘What?’ He said, ‘Yeah, there’s like a volcano,’ and I said, ‘You’re messing with me.’ He’s like, ‘No, mate, he told me the whole thing.’ So he told me the whole story, so I heard it right from Tom Holland first. And then, when I read the script, I was like, he wasn’t messing with me. It was all real.”

Holland is known as the least-trustworthy actor in the Marvel universe, and for good reason. This isn’t the first time the actor has dropped some big reveals. Before Infinity War was out Holland opened a package live on Instagram, revealing the movie’s first poster before it was released. He also ruined Infinity War in front of a sold out crowd in L.A. on opening night.

After dropping such a wide array of spoilers over the past few years it’s no surprise that fake scripts were made for Infinity War and Avengers 4. Marvel even took the extra step to pair Holland with tight-lipped Benedict Cumberbatch, who has stopped Holland from dropping any spoilers quite a few times already, during their press tour. Don’t believe us? Just watch.

You can catch the interview of Pratt dishing the dirt on Holland, below.