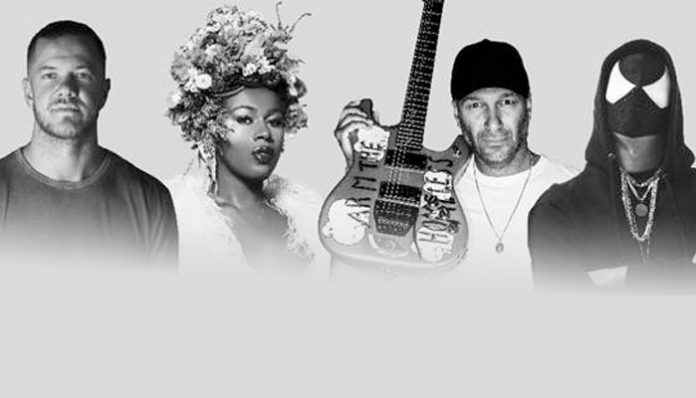 Thanks to Tom Morello, your weekend playlist just got molten. Today, the Rage Against The Machine guitarist has delivered “Stand Up,” an incendiary collaboration taking aim at police brutality and institutionalized racism. Morello is joined by activist/artist Shea Diamond, Imagine Dragons frontman Dan Reynolds and Bob Rifo of EDM commandos the Bloody Beetroots.

“I grew up in the tiny lily white, archly conservative town of Libertyville, Illinois,” Morello says. “When I was a kid, someone hung a noose in my family’s garage, there was occasional N-word calling, etc, etc. On June 6 of this year, there was a Black Lives Matter rally and march in that same town that drew over 1,000 people.

“It seems that the times, they are a-changin’. I was so inspired that night, I reached out to Dan from Imagine Dragons. The Bloody Beetroots and I had conjured a slamming track and within 24 hours, Dan had sent back a completed vocal. We got Shea Diamond, a Black transgender woman with a long history of activism, on the track and the coalition was complete.”

“When Tom reached out to work together with Shea Diamond and the Bloody Beetroots on this track,” says Reynolds, ” I immediately went up into my room and wrote/sang the chorus and verse that day. This country certainly needs fixing, and I believe it will take people from all sides and colors to fix it.”

“When I hear people talking about being allies of the LGBTQ+ community, mainly in the Black and Trans community, it’s almost laughable,” says Diamond. “We watch them profit from our pain, making these surface level posts of solidarity–especially in music. When I think about Black Lives Matter and Trans Lives Matter, you don’t get to see any representations of collaborations. Many would never share a post, let alone do a song together. So when I heard Dan Reynolds wanted me on his song, I nearly flipped. I wasn’t surprised, though. He’s been so intentional in sharing posts, helping to raise money within our community and more. He really puts the A in ally!

“This is a proud moment in music history, and I feel honored to be a part of such an important song during this climate,” Diamond concludes. “We need to know where everyone stands in the music community, as music is an essential tool that can change the hearts and minds of so many.”

Read more: Why you’re not punk if you don’t support BLM according to Brett Gurewitz

In addition, Morello and the artists involved are donating their royalties from “Stand Up” to several non-profit groups. NAACP, Know Your Rights Camp, Southern Poverty Law Center, and the Marsha P. Johnson Institute. Morello says these activist organizations “are doing great work combating racism, injustice, and police brutality.” In addition, the issuing label KIDinaKORNER/Interscope Records will donate an amount equal to the artists’ royalties from streams of the track for a three-year period.

“I was in my third month of quarantine,” says the Bloody Beetroots’ Rifo. “I was waiting for the right opportunity to present itself to reconnect to the world when Tom called me to work on ‘Stand Up.’ It is during times of turmoil and upheaval that we musicians have the responsibility to accelerate change with a loud and strong message for a better present and future. Today we can change this planet. This is our time. This is our turn.”

Check out the lyric video for “Stand Up” below. Get the track here.