The band immerse themselves in the neon-tinted world of ‘Scaled And Icy.’

After months of anticipation and a whirlwind past few days of cryptic clues, twenty one pilots have finally introduced their next era with a new music video for “Shy Away.” Taken from their first album in nearly three years Scaled And Icy out May 21, the upbeat track officially marks the first single.

While “Shy Away” kicks off a new chapter for the band, they definitely haven’t completely shed their past eras as hints of them have popped up in the rollout to the debut.

twenty one pilots first welcomed us to Trench back in July 2017 as Josh Dun hit the stage in a Blurryface-era T-shirt at the Alternative Press Music Awards to accept the band’s Most Dedicated Fan Base win. In his APMAs speech, Dun apologized for Tyler Joseph’s absence, stating, “Tyler wishes he could be here. He’s off severing ties with Dema.”

Months later in April 2018, The Clique discovered a link to dmaorg.info hidden in a Vessel-era GIF on the band’s official site. Thanks to some impressive sleuthing, fans eventually decoded the site, unlocking a collection of images, a map and a letter from Clancy—who would become a recurring presence during Trench. While new information and clues were added to the site throughout that era, it remained relatively quiet until recently.

On April 2, fans discovered that the files were being removed slowly with a progress bar set to time out on April 5. Once the files were allegedly erased, dmaorg.info updated to a message that it had been “terminated,” in turn signaling the start of a new era.

“The page you are looking for has been removed from our servers,” the site reads. “The account was in violation of terms established by The Sacred Municipality of Dema, and deemed contraband material. Disciplinary action has been taken, and the offender no longer has access to this account.

“Further actions have been taken to ensure these violations will not occur again. Anyone attempting to access or share any contraband material will be prosecuted to the fullest extent of the laws set forth by DMA ORG and The Sacred Municipality of Dema. Infraction No. 3.12.1.14.3.25 9.19 4.5.1.4”

After decoding the infraction numbers, some fans believe it corresponds to each letter in the alphabet and spells “Clancy Is Dead.” 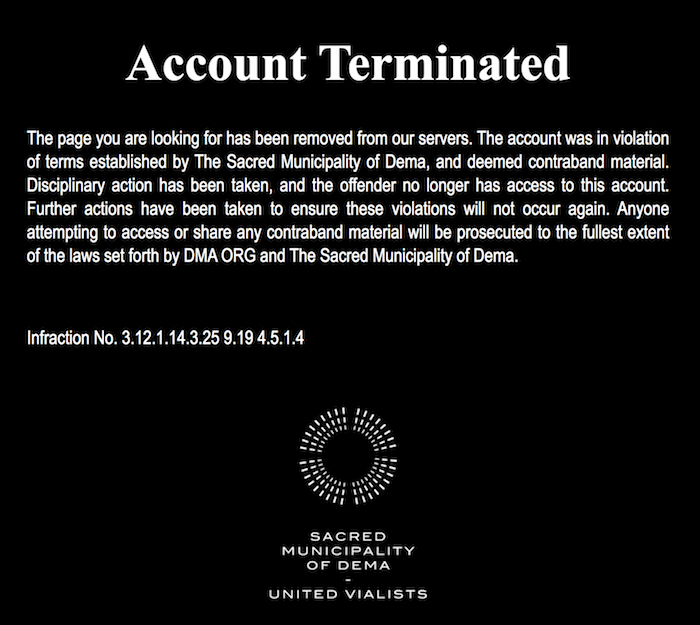 Now, the band kicked it off with a premiere of “Shy Away” on BBC Radio 1 with host Jack Saunders. Minutes before the debut, Saunders took to social media to share the first listen of the track was airing at 1:07 p.m. ET/6:07 p.m. GMT.

Shortly after, it officially hit streaming sites, and the band took to their own accounts to announce the album.

Shy Away is the first song we are sharing with you from our upcoming album Scaled And Icy. https://t.co/fXCOpexIxS pic.twitter.com/qunCFwCCey

Directed by Miles And AJ, the video introduces a vibrant new era for twenty one pilots, who are washed in neon featuring their new colors of light blue, pink and yellow. The video also gives a nod to their trademark ski masks present in both the Vessel and Blurryface eras as the duo play through the new track. Check out the “Shy Away” music video below.

The new album was written and produced by Joseph from his home studio in Columbus, Ohio—a setup the singer regularly shares on his personal Instagram and even captured in the visualizer for the audio premiere of “My Blood.” and the DIY video for “Level Of Concern.” Dun also worked from home, engineering drums for the album from across the country.

In addition to the new music video and album announcement, twenty one pilots will also host their first streamed performance on Maestro’s platform. Sponsored by Hot Topic and Chipotle, “Twenty One Pilots – Livestream Experience” will premiere the same day as the new album on May 21 at 8 p.m. ET.

The band will play songs from throughout their discography and debut new tracks from Scaled And Icy for the first time. With the purchase of a ticket, fans will unlock a 6-week interactive experience produced by lili STUDIOS. Ticket holders will also gain access to rare content, limited merch and special editions of the upcoming album.

With the release of the livestream poster, fans can also see a hint of Trench remains as it is billed as “A production of dma.org and Good Day Dema.” Tickets are available here. 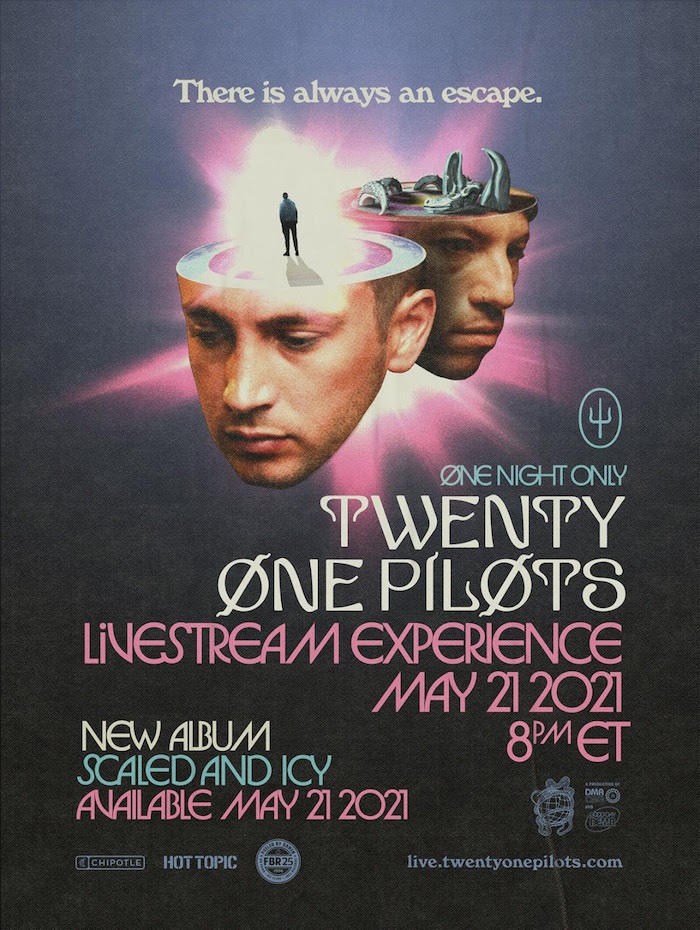 Scaled And Icy will arrive May 21 via Fueled By Ramen. A special edition box set preorder launches April 9. However, select packages are currently available here. Check out the album artwork featuring the previously teased logo and full tracklisting below. 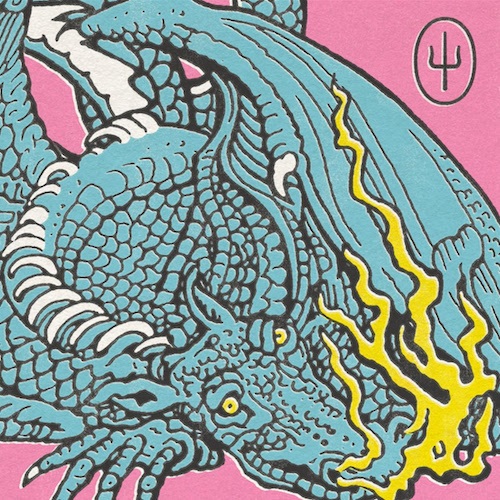 More on twenty one pilots

Like many artists over the past year, twenty one pilots found themselves with more time on their hands in the wake of show cancellations amid the coronavirus pandemic. The band coped with the changes in the first post-Trench single “Level Of Concern” in April 2020, They later broke a Guinness World Record previously held by Pharrell’s “Happy” by constructing a never-ending music video with 162,000 user submissions across 4,264 hours, 10 mins and 25 seconds of footage.

Read more: 10 musicians who have more than just one role in their band

In May 2020, Joseph told Zane Lowe that the band pushed up plans for their next album quite considerably.

“I’m writing a record right now,” Joseph said at the time. “I’m not sure when it’ll be released. But it’s definitely going to be sooner than we were planning on releasing a record.”

The frontman also opened up about the future of live shows and what to expect next during an interview for their cover story for Alternative Press’ 35th anniversary issue.

“I’m not really sure which direction we’re gonna go yet,” he admits. “There are two very different records, in my opinion, to be written. One being right now and the other one being after that. I don’t know which one I’m going to do first. I have an idea of what I think is next, sonically. It’s just whether or not it’s too big of a risk, I guess.”

Joseph gave an update in mid-November with a brief video on his Instagram Story where he shared a simple, “I’m working on the album.” Since then, there were very few updates on the status of the album, but that didn’t stop the Clique from theorizing their own.

What do you think of twenty one pilots’ “Shy Away”? Let us know in the comments below.