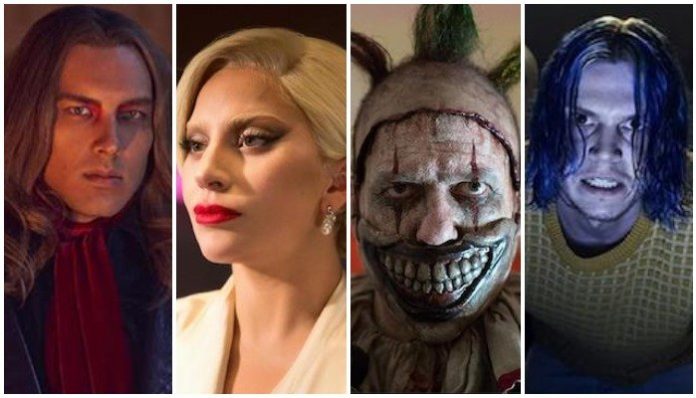 American Horror Story would be nothing without its complicated villains. If there’s one thing the beloved anthology nails, it’s how to develop a character beyond a bloodthirsty or inexplicably unhinged persona. Throw in a turbulent backstory and audiences are torn between rooting for the baddies and the goodies—if you can find any.

While we’re all bingeing our favorite shows under quarantine, we’ve brought together the most popular bad guys from all nine seasons who have kept us hooked since Murder House to remind us what life was like before coronavirus—full of murdering clowns, sassy vampires and…the Antichrist.

The first of the infamous Langdon dynasty in our list is the cigarette-toting, whiskey-downing Murder House matriarch Constance who murdered her husband, Hugo, and housekeeper Moira O’Hara, ordered the murder of her son Beau and even attempted to poison Violet Harmon—so far, so ruthless. Constance’s body count racks up surprisingly throughout AHS’ debut season, but she’s a redeemable kind of villain, as Jessica Lange’s iconic character will stop at nothing to protect her family. She tries her best to raise the troubled Tate and even takes it upon herself to bring up her Antichrist grandson Michael Langdon.

1984’s prim and proper camp leader Margaret Booth is the perfect ’80s horror villain—pretending to be the final girl of a camp massacre and using the pretense of religious conversion to conceal her own crimes. Once it transpires that she was the culprit all along, Booth becomes such an infectious and infuriating villain that she has audiences hooked on her every piercing word. She doesn’t have much of a motive to explain her relentless pursuit of Redwood’s counselors, but the character becomes a vehicle for the season’s exploration of psychopaths and the psychological cause of their murderous intent.

Freak Show’s Dandy Mott started as a spoiled brat who dreamed of joining the freaks, but his merciless side bubbles to the surface when he meets Twisty and becomes his apprentice. While infuriating at times, Mott is such an amusing reprobate that you can’t get enough of his bizarre tantrums. Of course, there’s no forgiving him for imprisoning the twins, framing Jimmy Darling for his murders at a Tupperware party and killing most of the freaks in a moment of madness. However, Mott is one AHS bad guy who kept us glued to our screens, albeit watching through our fingers.

Asylum’s lead fiend Bloody Face, otherwise known as Dr. Oliver Thredson, kept us guessing through every episode. He managed to kill Lana Winters’ girlfriend, Wendy, imprison and attack Winters and frame Kit Walker for his crimes, all while convincing everybody that he was merely an understanding psychologist with a lack of maternal role model. Regardless of his less than ideal upbringing, Thredson’s relentless bloodlust and Ed Gein-esque crimes are monstrous, but he’s a rogue you can’t help but watch. His confrontations with Winters in his basement made for such gripping viewing, he simply had to make this list.

The Langdon family’s second generation brings us the chaotic Tate, which marked Evan Peters’ first role in the series. Shooting up his school is one thing, impregnating his girlfriend’s mother dressed as the Rubber Man is another, but we still have a fascination with the mop-top Murder House resident. Why? Because he’s a troubled teenager—we can all relate to that. Tate had a dysfunctional upbringing under Constance, never living up to her perfectionist approach to parenting. Luckily for fans, his murderous actions are explained in Apocalypse as a result of the devil’s power over him, being a vulnerable host for satanic influences in the house’s “hellmouth.”

Sure, he’s a murdering psychopath, but the heartbreaking story behind the iconic Freak Show villain’s disfigurement had us all regretting judging the book by its (admittedly terrifying) cover. Existing to bump off every inconsequential side character and becoming the vehicle for Elsa Mars’ death, Twisty is revealed as a former freak show clown bullied by his fellow freaks, and his failed suicide attempt led him toward murder. Reappearing again in Cult to amplify Ally Mayfair-Richards’ fear of clowns, Twisty is an AHS institution, and whenever he reappears, we know things are about to get real.

Lady Gaga’s classy Countess Elizabeth from Hotel is the epitome of AHS villains we can’t bring ourselves to loathe. She kills pretty much every living person she comes into contact with, but she does it with so much sass and style, it’s hard to genuinely hate her. 112-year-old Elizabeth’s endless love for Rudolph Valentino that kept her in the Hotel Cortez in the first place, plus her selfless nurture of Liz Taylor into the trans queen we adore, transformed her character from a ruthless baddie to a vampiric yet troubled goddess we can’t help but stan.

Sister Mary Eunice is fairly innocent, but the version that finds herself possessed by the devil after an exorcism at Briarcliff created such a compelling villain that made Asylum an iconic AHS season. Removing Sister Jude as head of the asylum and framing her for murder, employing Dr. Thredson, aka Bloody Face, and attacking the monsignor are just a few of her crimes. That said, Lily Rabe’s stunning performance makes Eunice a rare breed of evil-doer who leaves you conflicted between rooting for the devil and the real Mary Eunice behind the possession.

Despite his dictatorship, evident insanity and inherent hatred of women, Cult’s “Divine Ruler” Kai Anderson was never really meant to be a fully despicable villain, particularly when we see him saving innocent people from Pastor Charles in “Winter Of Our Discontent.” Kai may be sadistically persuasive, intimidating, often murderous and downright bonkers, but he stands up for what he believes in, and, on rare occasions, his policies don’t sound completely abhorrent.

Cody Fern’s portrayal of The Antichrist, aka the son of Vivien Harmon and Tate Langdon, in Apocalypse broke our hearts more times than we can count. A misunderstood child (who’s only about 7 years old, really) who just wanted to please his family, Michael wound up becoming the most powerful warlock in the world, the son of Satan and the bringer of the end of days… Busy guy. However, his tragic backstory, his affection for those he loves and his untimely demise under the wheels of Mallory’s car made us fall in love with Michael far more than we should.