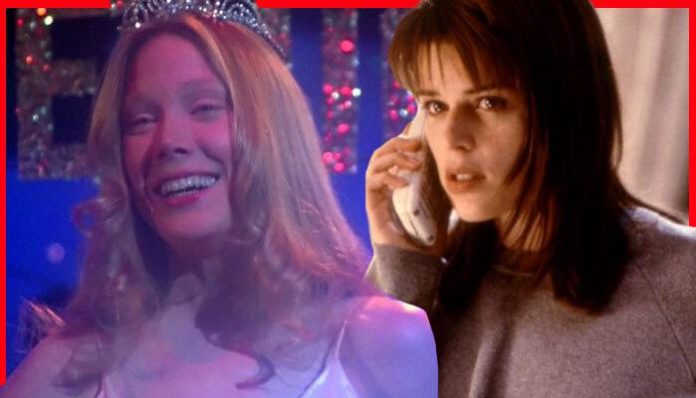 As much as we enjoy horror movies, there are some tropes that are beyond overplayed in the genre. When writers come up with good ideas, they can be copied endlessly until they become exhausting and cringeworthy to see. Yet, they continue popping up in the movies that are meant to scare us.

These cliches should be instilling terror, but instead they conjure laughs over how ridiculously easy it is to predict what’s coming next. Read on for the top 10 cliches in horror movies.

We all know Carrie did this best when she appeared in her white dress soaked in pig’s blood while murdering everyone at prom. Unfortunately, countless horror directors saw how cool Sissy Spacek looked and decided that having a girl wearing all-white clothing while getting drenched in blood was the look. Now we know what’s coming every time a character is dressed this way.

A couple having sex when they get murdered

It’s become a golden rule of horror movies that you should just not have sex because everyone who does so is almost instantly killed. No matter the location or circumstances, having sex in a horror movie always seems to end in death, so it’s guaranteed that if two people are about to get hot and heavy, blood will follow.

Women running and constantly falling down

Horror has been notoriously awful toward women and constantly discredits their capabilities, but this cliche is beyond ridiculous when you see it in action. For whatever reason, just about every woman who gets chased by a villain forgets how their feet work and will trip over nothing, repeatedly. Maybe if they were wearing heels, we could understand a scene like this, but many directors seem to think women are like babies taking their first steps all over again.

The villain is invincible

Sure, the villain is supposed to seem unstoppable to create some fear of their abilities, but this can go too far sometimes. Some villains seem to be able to take countless numbers of bullets to the body (or head) without so much as flinching, or even after they suffer a fall that should kill anyone, they stand up again and keep going.

Despite horror directors and writers often turning women into helpless creatures at the whims of some big hero, they always seem to keep one woman around until the final act. The vast majority of horror movies have this “final girl” who usually comes out on top after a random stranger saves the day. You can almost always tell who the final girl will be, as she’s positioned as the “responsible” one within the group of protagonists.

Sadly, filmmaking, like many things, brings out racism, and horror movies have created a cliche that’s still present today. Black actors are already underhired to start, so to cast characters who give films proper representation only to kill them off immediately feels thoughtless and uninspired. One of the many reasons Jordan Peele’s Get Out was regarded so highly dealt with confronting this dumb trope as it took the cliche and flipped the formula.

Once a character in a horror movie shuts a bathroom door, something is going down, and it’s usually violent. Psycho pulled off the most iconic bathroom horror scene with the classic knife through the shower clip, but just like characters having sex, the moment you set foot in a bathroom, you can pretty much say goodbye to living.

Cars seem so reliable to get us from place to place, but if you’re in a horror movie, you should never turn a car off. Every time the keys are taken out of the ignition, someone gets killed or is lured into a trap. Even though the vehicle never seems to have trouble starting any other time, the moment you need it to, it just stalls until the villain shows up.

The grizzled old man who warns the protagonist to turn back

Horror movies would like you to believe there’s a grizzly old guy sitting in every small town just waiting to warn travelers of danger. They’re most often working at a gas station or lounging on a rocking chair on their porch, but you can guarantee they’ll tell people about the dangers awaiting them, only to be conveniently ignored. If an old man ever warns you to leave somewhere over some ominous, vague danger, just listen to him.

The vast majority of horror directors have either never physically shot a gun or simply don’t care about realism. First off, guns are incredibly heavy, but people of any size seem to be able to handle them like they’re a children’s toy. Second, aiming the weapon accurately with recoil isn’t as simple as video games or movies make it look. Yet, characters can just ping off headshots like they were born to do it. Worst of all, no one ever reloads. Bullets are never-ending until a moment presents itself where having an empty chamber will push the story further, even if it makes no sense.