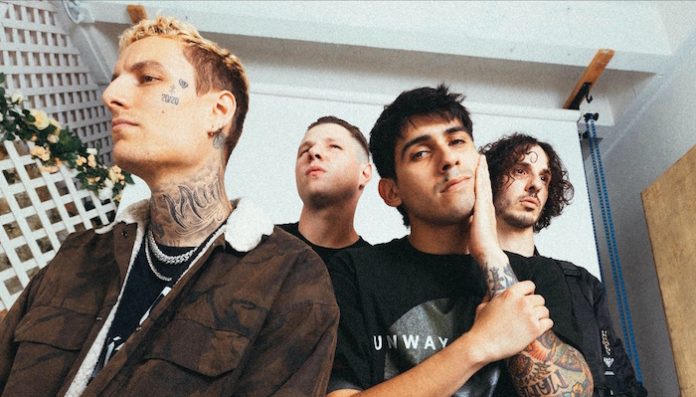 Crown The Empire surprised fans last week when they shared their first acoustic album in honor of the band’s 10th anniversary of their first show. To accompany the release, the post-hardcore four-piece are keeping the celebration going with the announcement of an acoustic performance livestream.

Beginning their music careers as teenagers, Crown The Empire had to learn how to navigate record deals, studio recording and everything that came with being in a successful band at a young age. Throughout the years, the group signed with Rise Records and dropped several albums, including The Fallout and The Resistance: Rise Of The Runaways. After the release of 2016’s Retrograde, the band went through one last lineup change before settling with the core group of singer Andy Leo, guitarist Brandon Hoover, bassist Hayden Tree and drummer Brent Taddie in 2017. With this lineup, they drew inspiration from their personal lives and struggles to create 2019’s Sudden Sky.

Though they’ve shared softer tracks in the past, 07102010 is the first time the quartet created a full acoustic album. The electronic elements the band have infused into their metal-edged sound persist, even on the new acoustic LP. From the opening notes of “aftermath” to the haunting waltz of “johnny ringo” and brand-new song “everything breaks,” gentle reverb and synths ring behind soft guitar riffs and echoing breakdowns. A culmination of several tracks throughout their discography, the LP is a tender trip through the band’s past and an atmospheric look into their future.

Crown The Empire go live via Twitch July 18 at 5 p.m. ET. Along with that, Hoover and Leo took a look back on their years of touring, how lineup changes affected the band and their hopes for the group’s future.

Over the past 10 years, Crown The Empire have gone through a couple of lineup changes. How have those changes affected the band’s overall sound? Do you think those changes that brought it to the four core members has allowed you to grow as a band?

BRANDON HOOVER: It’s completely changed the way we work, the way we write [and] the way we communicate to each other. Overall, it’s just better and more cohesive.

After the release of The Fallout, you never replaced a member. Once someone was gone, that was it. How did the rest of the group cope with taking on those extra instrumental and vocal responsibilities? How did the dynamic of the band evolve and grow beyond that experience?

HOOVER: It was weird at first, but just like anything else in life, once you do it a million times, it gets easier and easier. Now it just feels like this is how it’s always been. I think it’s brought us closer together.

You’ve used a lot of electronic elements in your music since the release of the Limitless EP. How have advancements in technology helped the band develop that? How have you used those elements to push beyond the boundaries of metalcore?

HOOVER: The advancements in technology have helped tremendously. We always try to stay on top of what’s new and what’s coming out. I think that’s why our music always feels like it’s meant to come out the year it comes out, rather than sound exactly like something we put out in the previous years.

ANDY LEO: We’ve always been big into blending electronic and organic sounds, and technology has only made it easier to create textures and feelings that were unique to us. It doesn’t feel like we’re inventing anything new but rather digging deeper into the sounds that made sense for us. Following that rabbit hole as far as it goes can make for some really fun songs.

Knowing what you do now, would you change anything about the writing, producing and recording process of your previous releases?

HOOVER: I don’t want to change anything about the past. There’s no point in pondering over any of that shit. You live, you learn. I like how everything turned out thus far.

LEO: It’s easy to look back and see the glaring mistakes we made, but those were all necessary to find out what ways worked best for us. Wouldn’t change a thing.

The band have been touring for a long time and have been all over the world. In the Out Of Focus mini-documentary, Brent Taddie and Andy Leo share a little about the challenges of touring and then returning to “normalcy” when the band aren’t on the road. What are some of the things you’ve had to overcome personally throughout years of touring?

HOOVER: I think all of us have had our struggles with addiction and depression. Some of us are still struggling with it. The reason why that documentary was so important for us to put out is because it shows we are human just like everyone else. We’re going through the same struggles as the rest of the world.

LEO: I think finding a sense of purpose in the moments of stillness between tour was always a hard adjustment to make. I still really don’t feel normal ever, but being able to ride that feeling out rather than being crippled by it is something I still have to fool myself into doing.

Over the years, you’ve shared a couple of acoustic tracks, even doing performances of “Prisoners Of War” and “What I Am” for APTV. The band also did a reimagining of “Machines” for the deluxe edition of The Resistance. Why decide to release an acoustic album now?

HOOVER: We had done an acoustic session for SiriusXM Octane in New York City while we were on our last headlining tour across the United States. When we got back home, the idea just came to us. It always helped that we had our 10-year anniversary coming up and a lot of songs in our catalog that could sound cool stripped down. So we dove in and started working. It actually took way longer than we expected because we recorded it all in our home studio. It was a lot of trial and error, but I think it came out great.

LEO: Approaching our 10-year anniversary in quarantine meant we had the time to sit and reflect on the journey so far. It seemed like the perfect opportunity to do a DIY record for our fans from across all of our albums.

The 07102010 title is a callback to the band’s very first show and includes acoustic renditions of several tracks throughout your discography, as well as a brand-new song. How did you decide which songs to reimagine? Was it difficult to transcribe and create an acoustic track from the original? Which songs were the most difficult to reimagine?

HOOVER: We wanted to strip down most of the songs fans loved the most, as well as a couple of B-sides. I think the most difficult songs [for me] were “mzry” and “johnny ringo” because we added so much production. If you could only see all the tracks on those songs…it’s insanity.

Read more: Kanye West is reportedly dropping out of the 2020 presidential race

LEO: We took into account which ones fans would be surprised to hear as well as which deep cuts we thought deserved a chance at new life. I’d say taking songs like “johnny ringo” and “voices” were the most challenging to recreate. You never know if something very scream-heavy could be translated into something good.

Of the 11 tracks on the album, only “everything breaks” is new. Did you ever think about creating an entire LP of only new acoustic songs? What was the inspiration for the track?

HOOVER: We didn’t want to do that. If we’re going to spend time putting together an album with all-new songs, it’s gonna be a full-on Crown record. The new song “everything breaks” was actually a song we wrote during the Sudden Sky album sessions. Unfortunately, it didn’t fit on that album, so we forgot about it. Then randomly we were in Japan, and the idea popped into my mind that the song would fit perfectly on this acoustic album, so we added it on there. We recorded it just as a demo but loved the way it came out, so we just mixed and mastered it the way it was. Sometimes you don’t need something to be 100% perfect for it to be special.

LEO: We never thought about doing a full acoustic EP in the first place. But anything is possible these days. Who knows?

Crown The Empire started while you were all still in high school. Your fans are familiar with the fact that Post Malone once auditioned for the band, but did anything else happen during your formation that would surprise people?

HOOVER: There’s been so much crazy shit, I honestly can’t keep count. But I can tell you right now, the Post Malone thing is the craziest one of them all.

LEO: One surprising fact is that I almost moved to Sweden [during] my freshman year of high school. Who knows what would’ve been different if my family had followed through.

Because the band were so young, you essentially had to discover the ins and outs of the music industry on your own. What advice would you give to yourself 10 years ago after experiencing everything you have in the industry and growing as a unit?

HOOVER: I would tell our younger selves to stop [and] communicate better. When you’re touring for years, you start to resent people, and all of that tension builds up and eventually explodes. I can’t tell you how many times that’s happened

LEO: Focus on the right things, make what you love, learn from mistakes and remember that it’s OK to feel lost and confused all the time. I tell this to myself now, too.

Where do you hope you’ll be in the next 10 years? How far do you hope Crown The Empire will make it not only as a band but as individuals as well?

HOOVER: I just want to be touring arenas. That is all, and we will make it happen.

LEO: I hope to maybe own something. Maybe a house, maybe a trailer in the desert. I’ll get back to you on that. I hope Crown leave a legacy that inspires other people who have no idea what they’re doing but love doing it so much. As individuals, it’s been inspiring seeing how far my guys have come, and I hope we continue to grow and keep pushing each other to be great.