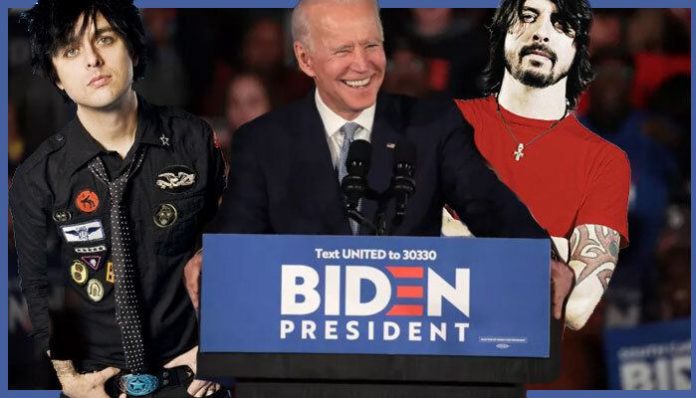 The world is on edge as America prepares to have its presidential election Nov. 3 between Democratic nominee and former VP Joe Biden and controversial incumbent President Donald Trump. Many world-famous entertainers such as Star Wars‘ Mark Hamill and Veep‘s Julia Louis-Dreyfus are actively using their platforms to urge followers to vote and to mark their ballots for Biden and his VP running mate Kamala Harris.

Alongside these endorsements, both big-name bands and underground artists are sharing resources to vote and showing support for the Democratic nominee along the way.

Many of your favorite artists are citing how Trump has disregarded climate change, actively tried to roll back LGBTQ+ rights, jeopardized access to abortions via the new confirmation of Judge Amy Coney Barrett, downplayed the coronavirus, tried to ban TikTok and referred to Black Lives Matter as a “symbol of hate,” among many other beliefs and policies that actively hurt members of not only the music community but the nation. (Not to mention, he was impeached.)

Biden’s campaign ads offer messages of hope, health and unity, showing a very different tone than his political rival, who often spews hate on Twitter and in press conferences.

Below, we have compiled a list of musicians who want their fans to vote and hope you consider dumping Trump. After all, art is inherently political. Everyone has a voice and a part to play in democracy, including you.

Looking for ways to help Get Out the Vote? Sign up to join our friend Damon Lindelof and other special guests in a phone bank, calling on those in Battleground States to show up and vote for Biden. Details: https://t.co/lXbMbcN4bS

Thank you. Return to your regularly scheduled anxiety!

Nine Inch Nails are voting blue down the ticket this year, and they hope their fans get out to vote and get politically active by making donations and volunteering their time for the Biden campaign. In a series of tweets, they discussed how this election will have long-term effects. “This election will determine our health, rights & future,” they wrote. NIN have joined Planned Parenthood’s Action Fund Initiative alongside nearly 200 other artists, including Beastie Boys, PUP and Weezer. This ad campaign arrived shortly after Barrett’s confirmation, a scary event for those in need of reproductive health care.

This is the most important election of our lifetime, and standing on the sideline is not an option. We endorse @JoeBiden. So please, go vote. Lives depend on it. pic.twitter.com/uxxAuWOfKo

In a simple photo shared on the band’s social media pages, they posted a Biden/Harris flag with the phrase “Runnin’ Against The Devil.” Fall Out Boy urged listeners and fans to “Please, go vote. Lives depend on it.” Pete Wentz, whose parents met while campaigning for Biden, spoke on the connection in 2008.

If I could vote in America, I’d vote with kindness. https://t.co/GQ8tw3Rqpl

Though he isn’t an American citizen, Harry Styles‘ influence in the States is palpable. He’s a role model for many Gen Z and millennials who may not know why they need to vote or who to vote for. His simple tweet sharing a Biden video and the phrase “I’d vote with kindness” may have rippling effects for his younger fans who are eligible to vote.

BERNIE AND HALSEY DISCUSS AMERICA. I sat down with @sensanders to bring you the first of many more episodes like this one. Register to vote at https://t.co/kfJH9NT9RA pic.twitter.com/g0ot1jgYRu

Halsey is a vocal supporter for LGBTQ+ fans, women’s rights and more. She discussed the state of America with Senator Bernie Sanders to share information with young people. Both individuals expressed why it’s so important to vote for Biden over the course of three episodes. This first episode discusses greed, wealth taxes and privilege. In later discussions, they tackle reproductive rights, SCOTUS, climate change and more issues that will inevitably affect young people.

send me photos if yourself at the polls/with your sticker/ballot in your BC merch (or regular clothes I don’t care!!!!) I just want to cheer you on for VOTING (please don’t send me photos if you voted for trump because then I will just scream at you) pic.twitter.com/yqlUWKBauM

Best Coast wants all of her fans to vote and tweet pics right back at her. Many listeners have indeed shared cute selfies with their ballots and “I Voted” stickers. However, she did not welcome those who voted for Trump.

I spoke to @vmagazine about why I’ll be voting for Joe Biden for president. So apt that it’s come out on the night of the VP debate. Gonna be watching and supporting @KamalaHarris by yelling at the tv a lot. And I also have custom cookies 🍪💪😘

Taylor Swift is a proud Biden/Harris supporter and even made special cookies for the VP debate. In a V Magazine interview, she shared, “The change we need most is to elect a president who recognizes that people of color deserve to feel safe and represented, that women deserve the right to choose what happens to their bodies, and that the LGBTQIA+ community deserves to be acknowledged and included.”

i will be hashtagging #fucktrump on every tweet until November 3rd. remember to vote. have a nice day xoxo #fucktrump

YUNGBLUD may not be from America, but many of his fans are, and he knows how this presidency has negatively affected them. With his wide platform, he’s reminding listeners to vote and #fucktrump. So far, he has stuck to his promise!

kamala is so fucking sick

While watching the vice presidential debate, Maggie Rogers shared her appreciation for Harris and her clapbacks at Republican VP Mike Pence. She has also played an active part in Rock The Vote campaigns and recruited fans to phone bank for Biden.

Biden has made it very clear that if he wins, he will work with every single american’s best interests at heart. MEANWHILE, Donald Dump OPENLY mocks and vilifies literally ANY american who disagrees with him. THAT’S NOT A LEADER THAT’S A TYRANT. IT’S THAT SIMPLE

The POTUS recently described Billie Eilish as someone who’s “destroying” America. If inspiring young women to pursue their dreams and changing music history as we know it is destructive, then sign us up. Eilish is a vocal advocate for getting out to vote and making sure our voices let Trump know he doesn’t speak for the majority of the country. In a PSA, she shared, “We all have to vote like our lives and the world depend on it, because they do.”

Her brother FINNEAS has also been vocal on social media about voting for Biden. In a recent tweet, he wrote, “Donald Dump OPENLY mocks and vilified literally any american who disagrees with him. THAT’S NOT A LEADER THAT’S A TYRANT…” The duo who brought us the soothing track “my future” knows that yours depends on this election.

Music has the power to change the world. So does voting.

Join us and many other performers for a concert to support @JoeBiden, @KamalaHarris and Democrats down the ballot.

Foo Fighters recently performed alongside other major music acts, including John Legend and P!nk, for the I Will Vote concert, sponsored by the Biden Victory Fund. Additionally, entertainers Lin-Manuel Miranda and all the Queer Eye cast members were there to support, too. Dave Grohl even had the chance to hop on a call with Dr. Jill Biden and his mother Ginny to talk about education in the state. Grohl’s mother, a teacher herself, shared that “Nobody has listened for a long time.” The Biden campaign has policies indicating that they wish to raise teacher salaries and give them more access to necessary educational resources.

One week until election day! Make the pledge to help elect a new president, and even if you've already voted you can still get involved.

The current president is an agent of chaos. Nothing more. Small. Petty. Sad. Sews disarray over unity. It’s the same one on one as it is when we look at the country as a whole today. Chaos.

All Time Low joined Pledge 46 to inspire their fans to vote, canvas, phone bank, etc. to “help elect a new president.” Politically active listeners who take the pledge may win a signed pennant, a Wake Up, Sunshine vinyl and an ATL matching sweatsuit. You can take the pledge up until Nov. 2 at 11:59 p.m. EST, and four winners will be selected Nov. 4. Frontman Alex Gaskarth also took to Twitter to relay his feelings toward the president, saying, “The current president is an agent of chaos. Nothing more. Small. Petty. Sad.”

Green Day‘s Billie Joe Armstrong joined the cast of American Idiot in October to work at Write Letter To Voters, a virtual event put on by Swing Left. Attendees got to dance, learn trivia and handwrite letters to underrepresented potential voters. The event details noted, “This proven tactic will help turn out the vote for Democrats in our 12 Super States!”

honored to be part of #teamjoesings for the @demconvention to help safely bring folx to the polls & ballot drop boxes this election. Voting is one small action that is a big component in allowing for positive change & Biden is our only option for that 💛 https://t.co/014XzzwGYd

MisterWives were one of many acts who appeared on the Team Joe Sings concert series. Other performances included OK Go, Ben Gibbard of Death Cab For Cutie, Kesha and more. The concert series started Sept. 17 and continued through each Thursday until Election Day. Each performer uploaded intimate performances to their YouTube page and had the chance to share why they support Biden—and why you should, too.

Last day to register here in PA.
The turnout in Philadelphia alone may well decide the next President. Our sports teams might not always show up. But we will. Get your whole crew registered and go vote for @JoeBiden 🙏🏻 https://t.co/3Yr5XzDSWf

Mt. Joy also shared a performance for Team Joe Sings. They’re vocal on their social media pages about who they’re voting for and why, all while poking a little fun at their home sports teams.

If you haven’t sent out your absentee ballot or voted early, you can find your local dropbox or polling location here. Make sure you get out to vote to make your voice heard!