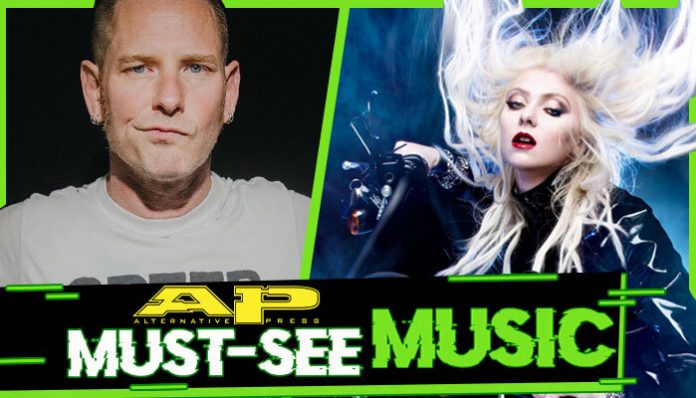 This week’s Must-See Music selections were made by established artists, hungry upstarts and creators ready to be heard. There’s a lot of heart and soul in this week’s selections, and that is always welcome around these parts.

There’s a hard-rock lifer who’s both respected and fearless. A 22-year-old rapper/singer who’s not shackled by genres but still brings his A-game when it comes to the things that matter. Various facets of the LGBTQIA+ community are represented, seeking both empowerment and serenity, given what life has thrown at them. There’s a poignant tribute to a fallen alt-rock titan from old and new friends and a duo of childhood buddies making hybrid pop that might help you with your own travails. It’s Friday, and you should see what we’re hearing in this Must-See Music recap.

Here Corey Taylor delivers a radio-rock jam that equates how your headspace can keep you away from those you really want in your life. With a career veering between high-decibel therapy (Slipknot) and rock most earnest (Stone Sour), Taylor’s inner truth is right here on “Black Eyes Blue.” In the video, he enacts all the psychic madness one can endure during self-quarantine, or house arrest. Sure, it’s a working-class rock ’n’ roll love song. But Taylor’s subtexts apply to everyone. Shoutout to everyone who wished they could be with someone without wearing a mask.

The Pretty Reckless – “The Keeper”

A poignant tribute from friends old and new. The Pretty Reckless’ Taylor Momsen got to know Chris Cornell in the later years of his life. Alain Johannes was a longtime friend of the Soundgarden frontman. (His band Eleven backed Cornell on tour in support of the singer’s 1999 solo bow, Euphoria Mourning.) Here Momsen and Johannes pay tribute to the late singer with a quarantine version of “The Keeper” from the soundtrack to Machine Gun Preacher. It’s positively stirring, with Momsen’s voice perfectly conveying the heartbreaking melancholy of Cornell’s lyrics. The performance is stunning, but the sadness is also palpable. (If you feel like you’re in crisis, call the National Suicide Prevention Lifeline at 1-800-273-8255.)

Bonelang, the Chicago duo of rapper Samy and vocalist/producer Matt Bones, thinks that anyone playing one genre of music needs a wake-up call. To that end, their new album SAINTMAKER has them mixing new alloys of pop, soul and hip-hop in ways that are both alluring and unusual. Bonelang also promote a sense of positivity to assist people in finding their way. Rapper Samy offered a three-part process when we premiered “Newlian” this week: “Identifying the pain in your life. Letting it have its way with you. Burying it.”

Witch Of The East – “Comfort Me”

Witch Of The East leader Aeris Houlihan blew us away last year with her debut album, Queen Of Insecurity. The record played like a mixtape of genres wild and dark, field recordings and poetry. But on “Comfort Me,” Houlihan has dialed back a lot of her darkness to reveal a side that’s far more vulnerable than her previous fare. In addition to writing and recording the song, she directed and edited the video. After all, you wouldn’t want to give just anybody your most complex emotions to frame, right? Must-See Music is all about the season of the Witch.

The 22-year-old rapper/singer/producer is filled with mad skills, big hooks and even bigger charisma. He may have signed a sweet deal with one of the world’s biggest record labels, but contradash still remembers his lean days quite vividly. When we premiered “petal pickin’” this week, we got a kick out of him acting like a baller in a big house with a sweet pool. The song itself finds ’dash questioning how much money and wealth influences the pursuit of sincere love and friendships. We’ll also say it again: Him goofing with a hot pink ’70s telephone receiver completely kills us. contradash built himself an army with two singles on Spotify. We think you’ll be repping his merch much sooner than later.

One of Epitaph Records’ latest signings, Neverkept are mining a vein where indie-rock inspiration and the vestiges of the scene mix. The new vehicle featuring Dorian Cooke (formerly of Broadside), Neverkept are exploring the possibilities to give rock music more character and presence than what’s happening currently. There’s a heart and soul to the quintet, and nothing brings that to the forefront like the video for “Sundown, Somehow.” The video conveys the Groundhog Day effects of depression and trauma and how we unknowingly revisit them. Neverkept are working hard to usher in a sense of self-awareness powered by some new approaches to rock. Their debut record might solve the genre’s current identity problem.

If Queens, New York-born, L.A.-based singer-songwriter ANSON was around in 2000, we would’ve adored him for saving us from turgid nü metal. (Dashboard Confessional did that for us instead, and it’s no surprise he’s an influence.) To his credit, ANSON could rock a VFW hall with 100 of his closest friends or land an opening slot with any of his influences (DBC, Taking Back Sunday, Paramore) with confidence. Signed to We Are Triumphant, ANSON’s genuine sincerity, excellent songwriting and unashamed joy makes him a major contender for pop-rock stardom. When his 2021 debut album comes out into the world, all will be revealed. Major labels will open their checkbooks, and mainstream rock will have a new contender who’s honest, forthcoming and not scripted from a marketing plan. Watch “Please Don’t Go” and smile forever. Remember him on Must-See Music when he sells out your town’s coolest venue.

A solid track from Point North, the L.A.-based band whose debut album, Brand New Vision, came out today on Hopeless Records. The trio of vocalist/producer Jon Lundin, guitarist Andy Hershey and drummer Sage Weeber have created a sonic netherworld of no genres and a narrator (named “Drax”) to help guide the listener through it. Point North teamed up with rapper DE’WAYNE to lay down some positivity on the title track. But that doesn’t really prepare you for the message conveyed in “No One’s Listening.” A woman of color prepares to go out on a run and finds an elderly woman who has fallen and needs help. One flashback later, the political and personal intention is loud and clear. (Watch it to the very end.) With gestures like this, Point North are clearly on their way to foment a new consciousness to listeners both young and old.

Some lighter fare for this week’s Must-See Music roundup. In 1981, veteran rocker/actor Rick Springfield scored one of the biggest hits of the year with “Jessie’s Girl.” The single about a guy obsessed with his best friend’s girlfriend became an iconic track for that decade. Claudio Sanchez, vocalist/guitarist of neo-classic rock team Coheed And Cambria, had an idea. He pondered the idea of his band writing sequels to other artists’ songs. One pitch to Springfield via Instagram Live sealed the deal. On “Jessie’s Girl 2,” C&C deliver an upbeat but cautionary tale regarding the titular character’s life. Springfield not only guested for a verse, but he also appears in the video as a bartender who has seen it all. The members of Coheed also appear in a gloriously ’80s-style “future kitsch.” Nobody saw this collaboration coming. Which makes it even cooler.

Bright Eyes – Down In The Weeds, Where The World Once Was

Fans of singer-songwriter Conor Oberst resigned themselves that Bright Eyes were over after 2011’s The People’s Key. Last year, he collaborated with Phoebe Bridgers under the name Better Oblivion Community Center. Little did anyone know that in 2017, Oberst and his close friends Mike Mogis and Nathaniel Walcott had agreed to reactivate the band. Which is a win for the world. Oberst’s treatises on everything from disheveled relationships to the state of our humanity ring louder than ever. Colored with elements as diverse as cinematic field recordings, lush string arrangements and vintage keyboards, Bright Eyes in 2020 are a beacon of reassurance for an otherwise troubling year.

The Venus In Scorpio – “Blissed”

Maxim Faster makes great electronic-pop and dance tracks under the name the Venus In Scorpio, and frankly, we can’t imagine them doing anything else. Earlier this week, Alternative Press premiered their new track “Blissed,” which pulled influences from ’70s rock, ’80s new wave and ’90s electro-indie tracks. In addition to the Venus In Scorpio’s dance-floor action, Faster has used their music as a tool for empowering themself and the world’s LGBTQIA+ community. “I wanna make music that explores the darker depths and lows of life just as much as the highs,” they say. “At the end of the day, this world is really fucked up, and we have to do our best to stick together and party until it gets better. There’s nothing left for us to do but evolve. ‘Blissed’ happens in a time of revolution, and after it gets this bad, there’s only room for evolution.”