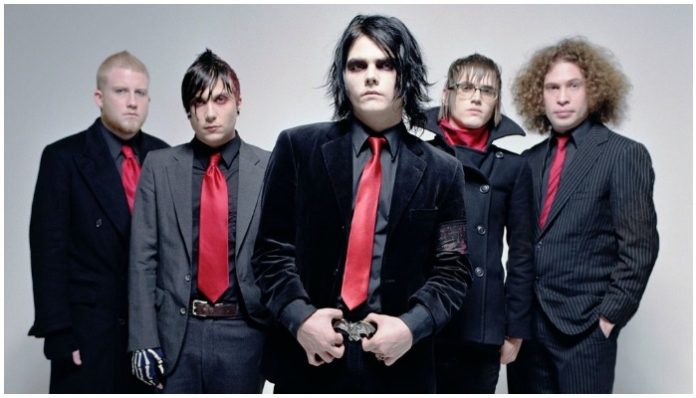 Featured in the August 2004 issue 193, My Chemical Romance made their major Alternative Press feature debut before appearing on the cover of issue 197 in December 2004. Following the release of their sophomore album in June 2004, ‘Three Cheers For Sweet Revenge,’ the group were interviewed by Leslie Simon and shot by Anthony Saint James. To celebrate the 17-year anniversary of ‘Three Cheers,’ we’ve unearthed the full first interview with vocalist Gerard Way.

While it seems that everyone is trying to sell you a CD or a silk-screened hoodie, My Chemical Romance just want you to feel something, and they don’t care if it’s heartfelt or dirty.

My Chemical Romance seemingly came out of nowhere in the winter of 2003. Nowhere being Newark, New Jersey, where vocalist Gerard Way, guitarist Ray Toro, bassist Mikey Way, guitarist Frank Iero and drummer Matt Pelissier sharpened their vampire teeth at basement shows and shithole dive bars, and though together only a couple of months, managed to land themselves coveted opening slots for acts such as Taking Back Sunday, Finch and the Used. With music more ghoulish than a Halloween party at the Osbournes’ and a stage presence more intoxicating than a pink at Harry Buffalo, MCR were a hit with their peers but a harder sell to audiences.

The band’s debut, I Brought You My Bullets, You Brought Me Your Love, introduced My Chemical Romance to the world (did we mention that the Brits practically worship them?). But the new disc, Three Cheers For Sweet Revenge, establishes them as long-awaited heirs to the arena-punk throne.

The production is slicker and the songs are shorter, but the band haven’t lost any of their boo-scary theatrics or violent fetishes. “It’s passionate; it’s really strong and aggressive, and I think [Gerard’s vocals] are genius,” the Used’s Bert McCracken raves, who lent vocals to a titillating track called “You Know What They Do To Guys Like Us In Prison.” “They’re a kickass band, and they always have been. I’m just a fan.”

AP caught up with Gerard upon his return home from MCR’s three-month stint playing with labelmates Avenged Sevenfold. In addition to learning some tips for toning up (courtesy of A7X gym buff M. Shadows), Gerard was also practically overflowing with details about the band’s new album. Three Cheers is about a pair of lovers who thought they died together but end up being separated posthumously. The only way for them to be reunited is if the dude goes back down to Earth and does the devil’s work of killing 1,000 evil men, not to mention some nosey angels. Now this we’ve gotta hear…

Lots of people, especially here at AP, were surprised at how good Three Cheers For Sweet Revenge is. Do you take that as an insult or a compliment?

It isn’t an insult at all. When we wrote our first record, we were a band for about three months. We just really wanted to be a touring live band. That was the goal.

The way the band operates is that we always like to come in under the radar. Especially this time around, with this record. We were saying to ourselves, “All right, this is how we’re perceived, and this is how we’ve progressed. Let’s be really quiet about it. Let’s not make a big stink about it. Let’s not toot our own horns. Let’s not even tell the fucking label.” It’s this squeaky-wheeled operation that we run: Come in under the radar, slap it on the desk and then they’re blown away. We just don’t like to talk about things—we like to do them.

The album’s part concept record, part band-therapy session. What kind of outside forces seeped into the storyline and caused it to go on tangents?

We’re still a relatively small band, but it was such a rapid progression from literally [playing] basements to full national tours instantly, [and] obviously the crazy and/or dangerous shit that happened to us. There are all kinds of tests of your moral character. All these things hit a band, and it’s how they deal with it. Does it bring them closer, or does it drive them apart? The other people you meet on the road, the camaraderie you get, the jerks you meet—that all came into play. We had a really fucked, crazy year.

Then, personally, the death of my grandmother changed everything. I had this huge story, this huge concept record worked out. That happened in November, and that was when we were coming really close to finishing up writing. At that point, we only had another month-and-a-half. It was really sad because I had just gotten off tour, and she died the next day, and we’re talking “the tour.” If you combined all the tours together and called it “the tour,” I missed the last year-and-a-half, practically, of this woman’s life. And I get home, she dies the next day and I didn’t get to see her. I was pretty devastated because she taught me how to sing and paint.

Basically everything I apply to this band, I got from her. So when that happened, I was like, “Fuck. Oh, God. How am I going to deal with this story? Does it even matter anymore? Is it just fucking pretentious? Is it bullshit?” And then I came to grips with it and said, “Fuck it. I’m going to write the songs that I want.”

Your lyrics are riddled by all sorts of supernatural powers, which seem to be metaphors for real horrors that you face.

The story is a metaphor for what you’re willing to go through for either somebody else or to prove yourself. It’s almost like your revenge is living your life the way you want and doing exactly what you want to do. All the people who shit on you or picked on you in your life, it’s your way of getting revenge. O

ur record is revenge, in a way, for any struggle we’ve had in our lives, being told fucked-up things like “Your band’s gonna be broken up in six months after you’ve started,” “You guys don’t have what it takes,” “You’re not going to make it,” all that bullshit. And then not even dealing with the band but just growing up, like being in school and being called a piece of shit and not fitting in with people. So that’s what the record is to us; it’s our revenge, in a way. It’s a different phase in our lives.

Tell me how you managed to wrangle Bert McCracken into singing backup on “You Know What They Do To Guys Like Us In Prison.”

Sometimes it feels like jail when you’ve got eight or nine guys in a van. It smells like jail, that’s for sure. Sometimes it feels like a prison, but sometimes even the guys in prison, as fucked up and rough as it is, they buddy up and stick through it together. I think that’s definitely one of the reasons I wanted Bert to sing on it. He’s one of the few people that I’ve met on the road and really connected with.

He was like a cellmate, in a way. He’s already been through the crazy rock star shit, and I’m just new to this. [The song is] definitely about that camaraderie and obviously touches on lost masculinity. I think that just comes from being around dudes so much, and you actually start to lose your masculinity. Especially because we’re not the kind of band like Mötley Crüe where we fuck around with groupies or anything. In that respect, we’re very monk-like, in a way.

Definitely. There are straight-up lines about going down by myself and going down with my friends.

I also wanted, at the same time, [for] the record to be a testament to self-expression. Putting stuff in there like that, while not being a homosexual myself, but expressing myself in a homosexual way, is either going to push your buttons in a negative way or you’re going to identify with it.

Well, this whole scene wants to be sensitive but not too sensitive.

Even the hardcore bands, the really hard ones, you see them in makeup and stuff. I like that. I think it keeps it dangerous. It keeps it exciting. In a way, sex has really been missing rock, especially because of all the sensitivity. That’s what I really wanted to convey on the record, too. I wanted the record to be very dangerous and sexy at the same time. There’s such a lack of sex in music. It’s been more about getting in touch with your feelings and being there for each other, which is great, but it’s definitely lacking this sexual duality.

Before you look too far into the future, what’s My Chemical Romance’s present mission statement?

The main thing that we’ve always wanted to do was to save people’s lives. That sounds Mother Teresa-ish and outlandish, but it really does happen. It does make a huge difference. We’ve seen it in action.

Leadership has become a really big factor in the band and for me lately. I feel like there’s a lack of leadership. I feel like there are so many people out there who have the kids in the palm of their hand, listening, but there are few people saying something. That’s really what, especially with this record, we hope to accomplish. In between songs, too; not so much cursing and drunken banter but really go back to the way it was and really say something and connect with people in that way. It becomes less about merchandising and more about really saving lives.

You can read more full interviews with My Chemical Romance here.