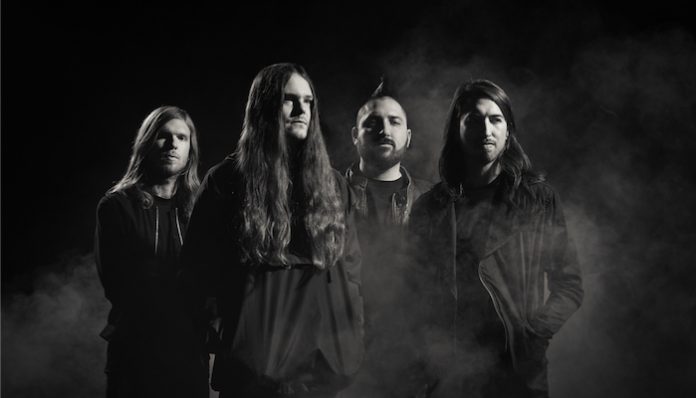 From boundary-pushing tracks to going back to their roots, Of Mice & Men are celebrating their 10th year as a band with EARTHANDSKY.

A decade in, the members— vocalist/bassist Aaron Pauley, guitarists Alan Ashby and  Phil Manansala and drummer Valentino Arteaga—are focusing on where they are in their lives and careers. What does it mean to be Of Mice & Men in 2019? With Defy dropping just last year, the quartet are hugely inspired by their fans and what makes them go crazy at shows. EARTHANDSKY brings that heavy sound to the foreground with the intention to cause circle pits and moshing on the Earth tour, which kicks off Sept. 23 in L.A.

Producer Josh Wilbur (Lamb Of God, Gojira, Korn) challenged and coached the band to bring their all with EARTHANDSKY. Beginning with “Gravedancer,” which is the longest track on the album, Wilbur helped keep the focus on sonically and melodically punishing tracks throughout its entirety.

This is your 10th year in Of Mice & Men. Since EARTHANDSKY is reverting back to your original “heavier” days, how has your sound and mindset toward your music changed since 2009?

VALENTINO ARTEAGA: I think with every album, Of Mice & Men always tries to focus our ideas on creating a snapshot of where we are in our lives. With EARTHANDSKY, having the band being around for 10 years and we’re on our sixth album now, we really felt like with this album, we really wanted to create a focused statement on what we’re still passionate about. For this album, for the 10-year statement, we really wanted to find what Of Mice & Men wanted to say. We’re creating the most important music of our lives, and it’s resonating with more people than our music ever has in the entire world.

Defy was just last year, and EARTHANDSKY has been coined as the follow-up to it. While Defy was still heavy, EARTHANDSKY definitely packs a bigger punch. Was it hard to switch back into the heavier side of OM&M?

Honestly, no. Quite the opposite. The music that you hear on EARTHANDSKY, the heavier material from Of Mice & Men, that’s the shit we love. We’ve been a band for 10 years, so we’ve seen the music industry change drastically over the last 10 years, bands and people change; we’ve changed—everybody changes. Everybody evolves. As our evolution happened, we realized this is the music we love to play. For us, we love heavy music with our whole heart and soul.

Speaking of Defy, you have been on the road for so much of the last year. How did you have time to record EARTHANDSKY? Were there any different recording processes this time around?

It was an important process for us. Our traditional album creation process is that we write on the road, we write at home and we get a bunch of material together. Then after touring is done, we book three or four months to go and live in the studio and immerse ourselves in the album. With EARTHANDSKY, we wanted to do something different. After [Defy] was released, we’re like, “Well, we’ve got a ton of tours, but we don’t want to stop touring.” So we booked studio time in chunks of three to four weeks between tours to keep that flow of excitement and energy.

We got to record at our favorite home studio, Hybrid Studios, and we got to go home every night and see our wives and families. We got to live, breathe, work, be a part of our home community and create music at the same time. That comfort and that allowance of letting us do our own thing…We found that gave us a different outlook on the album. It helped us streamline and focus the album even more. It was a really free-flowing process and one that we truly enjoyed.

You’ve expressed how stoked you were to work with Josh Wilbur. How did you connect? How did he help make your vision for EARTHANDSKY come alive?

It was an awesome collaborative process. We were looking for SoCal native producers and [someone] who could work with our schedule of breaking up the album creation cycle. We connected right off the bat. His work ethic and his attitude toward stuff is really similar to ours. Once we took a meeting and did some demos, we were sold. He’s like the coach of the team. He’s the coach, and we’re the team. It really turned into a collaborative working situation where he’d be like, “Try something else. Try this. Try that.” Working with him, his massive strength is that he really knows groovy, aggressive metal music. With his knowledge of the albums he’s done in his career and with us and the songs we’ve written, it was the perfect mashup of everybody coming together and us creating this awesome album.

On Twitter, you mentioned “tons of Easter eggs” in this album, starting with the spaceship. Can you cue me into another?

Everything ties into this fictional narrative that we’ve created. For us, it’s all about creating a moment with our album. As soon as we finished the album, we’re already thinking of music video ideas and trying to create this escape from reality. That’s what music is. It’s supposed to open your mind and take you to this other realm where you’re not worried about anything. You’re focused on the music. You’re focused on the visual, reading the liner notes, and putting two and two together and finding little Easter eggs in the album artwork and in the music videos that tie them all together. There’s verbiage and lyrical concepts from other albums that get hidden in there. There’s just so much.

To us, creating albums in 2019 means more to us than just compiling music. For us, it was deep talks about every little single aspect. Being able to tie all that stuff together has been so much fun and so involving. We want more than just face value. If you want to dig deep and follow the rabbit hole, it’s there for you. You put the pieces together yourself. The pieces keep on falling away, but it’s up to you to put them together. You’ll understand when you open the album art. Just follow the rabbit hole.

Earth is an anchor. Earth is a blip on the entire sky, the universe. It holds us back to think that if there is something holding you down in your life. You have to be the sky and rise above what anchors you or else you’ll never fly. You face that anchor. Earth has a gravitational pull. It’s meant to hold things back.

Lyrically, it’s about the weight of somebody’s gravity holding you down and being that brick on your forehead. It’s that anchor that weighs you down and weighs on your psyche and weighs on your human being. The sky is infinite, as far as we know. This was an infinite statement [in] that it’s all encompassing. It’s visually huge and something that we as human beings can’t even figure out—how to not feel weighed down by our feelings. It’s a message that you need to rise above.

Which song on EARTHANDSKY took the longest to finish? Why?

“Gravedancer” went through a lot of changes, and it almost didn’t even make the album. “Gravedancer” trekked through new sonic, heavy territory for Of Mice & Men. There is a lot of new sonic elements that made us question, “Do we push the envelope like this?” Once we heard it finalized, we realized its [potential]. We were like, “This is it. This is the first song on the album.” We are always going to be this group of musicians who second-guess stuff and overthink stuff. We care so much about our craft, music, and what we share with our audience that we want it to be powerful. We want it to mean something.

Of Mice & Men are constantly categorized as metalcore. Do you feel that this label is still relevant to EARTHANDSKY?

Yeah. Because metalcore is a blend of hardcore and metal. We’ve always been that band…Sometimes bands will try and run from the label that they’re given, and the reality is that we are given that label. We don’t consider ourselves a metalcore band; we consider ourselves a band… We’ve always had that genre attached to our name…This is the music that got us out of our parents’ house and put us on tour and showed us the world and taught us how to be adults and how to be musicians…We don’t run from any genre that people are going to give us because that’s given to us and we didn’t earn it. We just create heavy music that we love.

Is there anything else you want fans to know before diving into the new album?