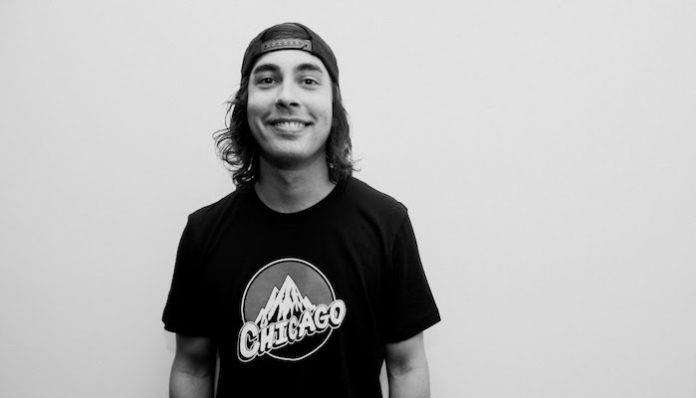 Earlier this month, Pierce The Veil frontman Vic Fuentes shared the “life-changing” and heartwarming news that he’s now stepping into the role of CEO and co-chairman of the Living The Dream Foundation. The nonprofit organization helps children and young adults with life-threatening illnesses stay positive, maintain hope and appreciate each and every day in the face of their afflictions.

Since 2016, Fuentes has served as an ambassador for the foundation that he holds near and dear to his heart. So when the opportunity arose to save his favorite nonprofit from going under, the PTV frontman didn’t hesitate to reach out a helping hand.

We sat down with recently anointed CEO and co-chairman to discuss how he ended up taking on such a large role and his plans to use his incredible platform to really revamp the foundation.

You’ve been an ambassador for the Living The Dream for the past three years. How did you first get involved with them?

We started working with them on Warped Tour and later at different rock festivals. We started noticing them around all the time. Every once in a while before we’d go on stage, they would bring a family in, a kid who was going through some hard times in his life. They would bring the family over, and we’d hang with them, take pictures, talk to them. Then we’d go onstage, and they would be onstage and watch the show. It was always so positive and rewarding, tangible and real. Over the years, we just started growing really close with them.

Read more: Pierce The Veil frontman Vic Fuentes teases the band is working on “something special”

You’re now CEO and co-chairman. How did that transition happen? Was this something you ever saw yourself doing?

I always liked that our band was doing something in charities and doing something for a cause. I grew up admiring bands that did that, like Anti-Flag and Thrice. I always admired people who did that kind of stuff, so we always wanted to do it. Over time, we really started gravitating toward certain ones that we loved like Keep A Breast and Living The Dream.

My role in everything started a few months ago when Scottie Somers, the founder, posted something on Instagram explaining that the company was going through some hard times. They weren’t sure they were going to be able to continue on. So I was like, “Oh, my God, this is one of our favorite nonprofits. This is our favorite nonprofit.” I hit them up and commented saying, “Yo, if there’s anything I can do to help let me know” not in any way thinking I was going to start running the company. [Laughs.] I just thought I could help out with our band or something somehow. We started talking, and I realized they really needed help or they weren’t going to make it.

I don’t even know how to run a nonprofit. This is never something I thought of doing. But having Scottie by my side felt like it would make sense to be able to do it with him. I knew it was going to be a big commitment, but at the end of the day, my heart is in the right place. I really love this foundation.

It was like one of those crossroads where life hands you something and you can decide what you want to do with it. That’s what it felt like to me.

For a long time, your focus has been on music, and now you’re adding this incredible nonprofit role to your plate. Were there any nerves at all taking on the position, or were you like, “Yes! This is what I want to do!”

There’s a lot of nerves that go along with doing something that you’ve never done before. It reminds me of the feelings I had when we first started our band and we were starting from the ground up. The thing that kicks in is this crazy determination to let people know about it, just like we had [with] our band. I always ask myself, and I ask my band this, “If we were starting over today in 2019, what would we do? What would our first steps be?” And I think that’s a good question to ask yourself in any situation.

I am now running a nonprofit called @ltdfoundation !!! Please follow and support! “Together, we make dreams come true for children and young adults living with life-threatening illnesses.” #DREAMDAY 🖤🤘🎉🖤🙏🎉

It’s awesome because you already have this platform through Pierce The Veil. How do you hope to use that in combination with Living The Dream?

That was a big part of it. Being a spokesperson for them was important because I saw an amazing cause with super-deep roots. They’ve been around for 12 years, and they’re connected with all the biggest festivals. Everyone backstage knows them, but the people in the audience didn’t know them. The kids didn’t know them. That was where I was like, “I can definitely show this to our community, and I think that they will be supportive.’” That was a big goal for us, to put the foundation more in the public eye.

What’s been the most rewarding part about working with the organization so far?

The most rewarding part is the Dream Day. That’s where we bring out someone that has a terminal or life-threatening illness to a show or to meet their hero. That’s the whole purpose of the entire thing and the most rewarding part. Every time we get to do one of those, it reenergizes the entire company. We all text each other like, “It’s Dream Day-Day!” It’s a big event for us, so every time we do one it revives everyone’s spirits.

What are your plans for the future of the foundation? Is there anyone else you’re hoping to get involved?

One of the big plans is to expand outside of music more. They’ve done it a little bit. We’ve worked with some athletes [and] surfers. They did a Dream Day with Kobe Bryant and the Lakers. We’d like to expand more into certain places, maybe even YouTubers or the influencer world. Maybe athletes in sports. Whatever we can do with our resources. We have a really great team now. I’ve pretty much dragged every friend I have into this. [Laughs.] Together we all have a lot of different resources, so I think we can make a lot more happen now.

You’ve had this amazing, positive reaction after the announcement, and it feels like you are already raising awareness about the organization. Is there a way for people outside of bands/artists to get involved or help out?

Right now we just want to keep spreading the word. Tell everyone you can about it. Follow us on social media. Tell the story to as many people as you possibly can. We also have [a place] on our website where you can donate. We’ve made it super easy for anyone to become a fundraiser as well which is pretty cool. So instead of presents this year, [if] you wanted people to give you donations for your birthday, you can email, text your friends like, “Yo, I’m doing this for a cause I believe in. Instead of presents, could you donate?” We have this rad platform on our website. That would be a huge help because the more donations we get, the more Dream Days we can fulfill.

For more information on the Living The Dream Foundation and how you can help, check out their website and Instagram.