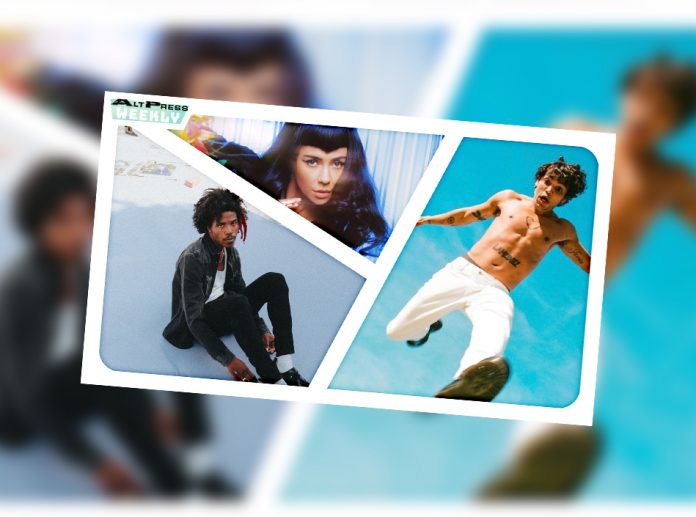 Welcome to the second installment of AltPress Weekly. Each week, we’ll cover new things we want you to check out. We’ll shout out fresh song drops and vintage finds, highlighting longtime favorites and brand-new discoveries. We’ll also feature the stories we can’t stop thinking about, along with all of the goings-on here at Alternative Press.

This week, we want to start by acknowledging the significance of Juneteenth, held annually on June 19 to commemorate the abolition of U.S. slavery. Yesterday, President Joe Biden signed a law recognizing the date as a federal holiday. June is also African American Music Appreciation Month. We hope you’ll join us and members of the African American community in recognizing this important day, along with the immense cultural achievements of African Americans throughout music history.

We’re also continuing our celebration of Pride Month and bringing you the best in news, interviews, lists, exclusives, playlists and premieres. There’s always so much going on that it’s hard to know what to highlight.

DE’WAYNE has released his brand-new album, Stains, out today via Hopeless Records. The artist recently chatted with AltPress Editor in Chief Paige Owens, speaking about his difficult road to the music industry and his sense that everyone needs to believe in themselves if they want to achieve their goals. Of the new record, DE’WAYNE explains that his main goal was to convey a message, one that transcends genre or style. “I think as we grow, people understand what I’m doing is genreless,” DE’WAYNE says. “This is just really about the story, really about the attitude and really just about what I’m doing on the track.”

Bob Dylan has partnered with Veeps to offer an exclusive livestream, set to air July 18. Titled “Shadow Kingdom,” the event will highlight the legendary performer’s lengthy career as an artist and musical influence. In advance of the show, Tim Stegall explored Dylan’s effect on a wide range of people, from Patti Smith and Adele to Rage Against The Machine and Post Malone.

“Alongside Hank Williams, Bob Dylan is arguably the greatest American songwriter of the 20th century,” Stegall writes. “The minute he walked into New York’s Columbia Studio A on June 16, 1965, bearing a Fender Stratocaster, a Telecaster-wielding white blues guitar virtuoso named Mike Bloomfield and a song called ‘Like A Rolling Stone,’ Dylan left folk music behind and revolutionized rock ‘n’ roll in ways the Beatles could not, despite their enormous, paradigm-shifting success the year before.” Along the way, the story reveals a transformative and multifaceted artist who has inspired an entire spectrum of music.

Last week, we unveiled our first Pride Month digital exclusive featuring chloe moriondo. This week, we followed with our next cover, highlighting drag queen sensation Trixie Mattel. Interviewed by yours truly, Mattel spoke about her multifaceted career, which has led to a successful cosmetics line, New York Times bestseller and a wildly popular YouTube channel (among other things!). She has also been making a major effect in popular culture. Mattel acknowledged the many ways she’s transforming country music, described her friendship and collaborations with AltPress cover star Orville Peck and her approach to performing original music and cover songs.

If you haven’t checked out our Spotify playlists, get over there now! We’ve completely overhauled our collection. From Top Alternative and New Alternative to AltPop Essentials and Future Of Alternative, our lists cover the whole range of alternative styles. This week, I want to shout out our newly updated Top Women Empowerment Songs collection. We’ve just published Paige Owens’ roundtable interview from our Power Issue: Women Rising, featuring Amy Lee, Lzzy Hale, Taylor Momsen and Maria Brink. Our playlist is the perfect soundtrack as you read, highlighting the history of women-centered modern alt music. Content ranges from early pioneers such as No Doubt, Bikini Kill and Joan Jett to Nova Twins, Halsey and Rina Sawayama. With bangers like Marina’s “Man’s World” and renforshort’s “virtual reality,” the list is packed full of anthems that challenge sexism and speak out for women everywhere.

Waterparks recently announced their A Night Out On Earth tour. The North American run will launch in October, bringing the group to over a dozen U.S. cities. In advance of the run, Awsten Knight answered an exclusive Q&A where he voiced his excitement for the tour. “I didn’t realize how much I missed [touring] until we started getting these small tastes of performing again,” Knight says. “We did the Wiltern album release show where we got to perform, but for zero people. Then, we did a couple in-stores on the East Coast where we played a few stripped-back versions of “[You’d Be Paranoid Too (If Everyone Was Out To Get You)],” “Violet!” and “Numb.” It’s teasing me for the real thing, big time.”

ALX, aka Alex Fike, has released a music video for his latest single, “Right Guy.” The new track is the first drop from his forthcoming EP, Yes, due this summer. Released via Alamo Records, the new track features silky-smooth production and perfectly placed instrumentals to underscore the song’s message. Lyrically, ALX offers to be the “right guy,” fitting in perfectly wherever needed: “He’s the right guy, your side piece/The wise-ass, I’ll be there/Some between too good and too bad for ya.” The visual plays with the dichotomy of too good and too bad, seeing two versions of ALX engaged in a fierce competition. “Right Guy” follows ALX’s 2020 The Fantasy EP. The record features the single “Love On Top,” with a video that garnered over 1 million views on YouTube.

Meet Me @ The Altar unveiled their latest single, “Feel A Thing.” The song’s lyrics characterize a struggle to overcome difficult feelings, reaching a point of numbness in the face of great pain. The track was accompanied by a retro visual, which begins as the group explore a vintage arcade. During their visit, band members Edith Johnson, Téa Campbell and Ada Juarez are transported into a video game universe. Along the way, they battle fantastic creatures and travel around using their musical equipment as weapons and special abilities. Meet Me @ The Altar have also announced their upcoming major-label EP debut, Model Citizen, due Aug. 13 via Fueled By Ramen.

Travie McCoy – “A Spoonful Of Cinnamon”

Gym Class Heroes‘ Travie McCoy has released the new single “A Spoonful of Cinnamon.” The song pairs its raw, confessional lyrics with a stripped-down accompaniment. As minimalist guitar sets the tone, McCoy chronicles his struggles over the last year. He speaks to loss and discovery and also alludes to the broader struggles facing society at large. The song leans away from anthemic proclamations or generalities, taking a far more personal approach. Even so, it’s sure to resonate with the many people who experienced their own difficulties. More than that, it gives a sonic shape to the past year, conveying a sense that none of us are really alone.

HEALTH and Deftones singer Chino Moreno have teamed up for “ANTI-LIFE.” The track is the latest release from the DC Comics Dark Nights: Death Metal soundtrack, executive produced by Tyler Bates. The new track sets soaring vocals over brooding instrumentals, constructing a distinctive sonic universe with the contrast. HEALTH’s Jake Duzsik argues that Batman is a natural partner for the group. “The Batman world is very existential, and that’s distinctive [from] other comic book universes,” Duzsik says. “That pairs well with my proclivities as a lyricist.” The soundtrack features a lengthy roster of musicians, including Mastodon, Chelsea Wolfe and Rise Against.

In his latest list, Stegall turns to the fascinating history linking punk and glam rock. The article highlights the influence of glam pioneers such as David Bowie, New York Dolls, Iggy And The Stooges, T. Rex and Alice Cooper. Stegall shows not only lines of influence but also the close interplay of stylistic concerns. At heart, punk might just be, as he writes, “post-apocalyptic glam.” If you haven’t heard it yet, be sure to check out the Dolls’ self-titled album. For my money, it’s one of the best albums to come out of the NYC scene during the 1970s. Don’t sleep on our list of LGBTQIA+ punk artists, either. The feature shows the centrality of artists such as Jayne County, Pansy Division, Laura Jane Grace and Cher Strauberry in punk’s past, present and future.