The internet experienced a bit of bad tattoo schadenfreude yesterday when Ariana Grande showed off a new kanji hand tat that was reportedly mistranslated. Instead of reading “7 rings” as intended—a nod to the singer’s recent hit of the same name—the Chinese characters of the ink were said to actually mean “Japanese style bbq grill.”

At least that’s according to Twitter user @hey__amo, whose social media spottting of the apparently misspelled script on Grande’s palm went viral Tuesday. But fear not, Ariana fans, because the singer’s already corrected the tattoo gaffe!

Below, check out a screenshot of Grande’s recent Instagram Story, posted at some point early Thursday, wherein the “thank u, next” singer gives a good-humored eulogy to to the “tiny charcoal grill” tattoo that she “actually really liked.” 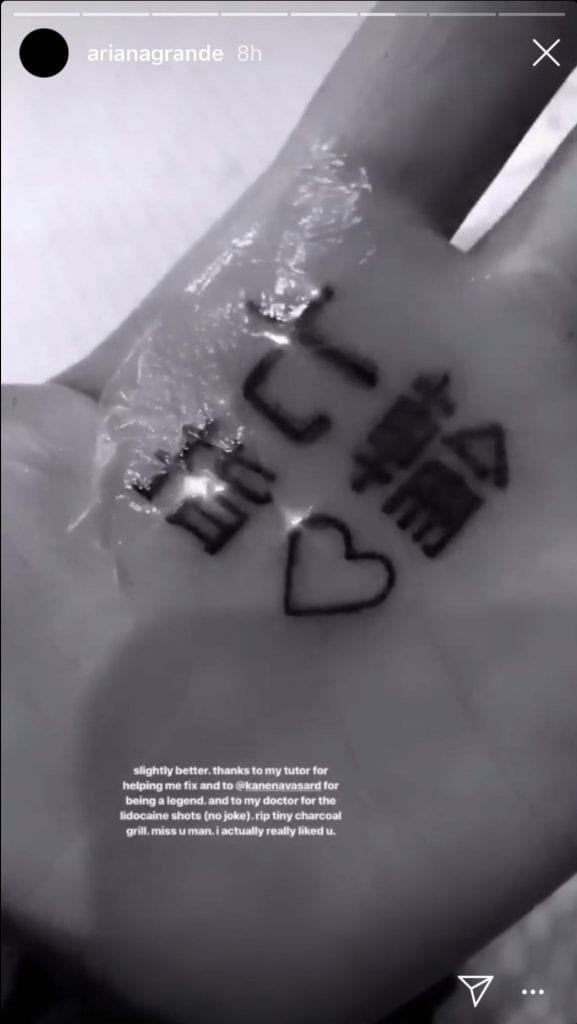 “[S]lightly better,” the text of Ariana’s Story reads. “[T]hanks to my tutor for helping me fix and to @kanenavasard for being a legend. and to my doctor for the lidocaine shots (no joke). rip tiny charcoal grill. miss u man. i actually really liked u.”

Read more: The 6 tattoos people end up regretting the most

Earlier this week, Kotaku pointed out that “the kanji character 七 means ‘seven,’ while 輪 means ‘hoop,’ ‘circle,’ ‘ring,’ or ‘wheel.’ However, when you put them together, the meaning is different! 七輪 (shichirin) is a ‘small charcoal grill’ and not ‘seven rings,’ which is written differently in Japanese.” Oops! Oh well, you live and you learn.

Since deleted, however, the singer first sported her unbothered attitude about the ink in a tweet. In fact, Ariana said she’d be willing to re-do the tattoo in the future, per The Fader—which actually ended up becoming the case, 24 hours later.

“indeed, i left out ‘つの指”’which should have gone in between. it hurt like fuck n still looks tight. i wouldn’t have lasted one more symbol lmao. but this spot also peels a ton and won’t last so if i miss it enough, i’ll suffer thru the whole thing next time.”

And that seemed like an amiable comeback from the pop star, don’t you think? Have you ever experienced a bad tattoo like Ariana Grande? Sound off, down in the comments section below, with some of your favorite tattoo times.