Does Machine Gun Kelly make an MCR reference in this new song?

Machine Gun Kelly released his highly-anticipated fifth full-length Tickets To My Downfall Friday. Days later, he surprise-dropped the SOLD OUT deluxe version of the pop-punk album leaving fans speculating if one of the newest tracks could be making a nod to My Chemical Romance.

Produced by Travis Barker, Tickets To My Downfall is packed with previous singles including VMA-winning “bloody valentine,” blackbear collab “my ex’s best friend” and “concert for aliens.” Kells also recruited Halsey (“forget me too”), iann dior (“nothing inside”) and Trippie Redd (“all i know”) on the official release.

With the deluxe version, fans finally got to hear MGK reunite with YUNGBLUD and Barker on “body bag” with the added bonus of the Used’s Bert McCracken. While EST and Kells were both beyond excited for that coveted collab, fans are now busy trying to decode another emo mystery.

MGK’s rock influences are all over this album, previously revealing Paramore, Taking Back Sunday, Lagwagon, Yellowcard and more served as inspiration. We even got a look at “emo Kells” in the “concert for aliens” video. With a Fall Out Boy sample on “body bag,” fans are now convinced another member of the emo trinity gets a shout on “hangover cure.”

As MGK sings, “Sunset on my black parade” in the chorus, fans believe it could be a reference to MCR’s third album The Black Parade.

“sunset on my black parade”

MGK releasing a pop punk album feat. the ICONIC Bloody Valentine but ALSO?? A track with Bert McCracken, singing “sunset on my Black Parade,” AND INCLUDING A COVER OF MISERY BUSINESS??!! ALL ON ONE ALBUM???!!!! I need time to recover ?

MGK held a Q&A about the album Wednesday night where several fans hit him up to try to get the story behind the lyrics.

@machinegunkelly what did you mean by “sunset on my black parade” ? #TicketsToMyDownfall

Can you please explain the lyric “sunset on my black parade” because I fucking love it but would like to understand why I love it? #TicketsToMyDownfall

While the musician said he would “absolutely” start a band with Barker and YUNGBLUD and a line from “title track” is his favorite, he unfortunately didn’t reveal the story behind “hangover cure.”

Regardless, the track also received an unreviewed annotation on Genius making the supposed connection. 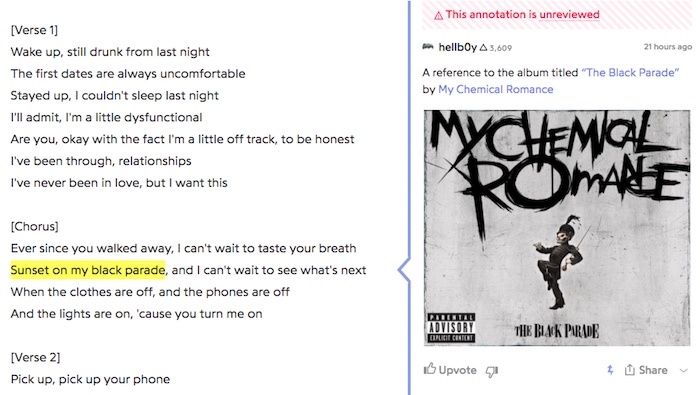 With Kells rocking out to MCR at Emo Nite LA and giving nods to other artists such as blink-182 in Rise Against-sampling “Swing Life Away” (which also features Sleeping With Sirens’ Kellin Quinn) and a shout out for Kurt Cobain in “A Little More,” it would really be no surprise.

Machine Gun Kelly will be virtually performing Tickets To My Downfall front to back with Barker at the Roxy Oct. 1. You can also see him play his previous album, Hotel Diablo, Oct. 8, which he first debuted in full at EST Fest 6 a month after release in 2019. Tickets for both gigs are available here.

“body bag” and “hangover cure” are among the four new songs on the deluxe version. Check out the full stream here. Be the judge for yourself if there’s an MCR reference and give “hangover cure” a listen along with the full lyrics below.

Wake up, still drunk from last night
The first dates are always uncomfortable
Stayed up, I couldn’t sleep last night
I’ll admit, I’m a little dysfunctional
Are you, okay with the fact I’m a little off track, to be honest
I’ve been through, relationships
I’ve never been in love, but I want this

Pick up, pick up your phone
I know you just gave me your number but I wanna know
What’s up, with us because I got a feeling
Tell me if it’s mutual
Are you, with anybody right now?
Or could you step out and talk to me?
I’d text you, but it’s better to call
‘Cause tomorrow there’ll be less that I have to delete