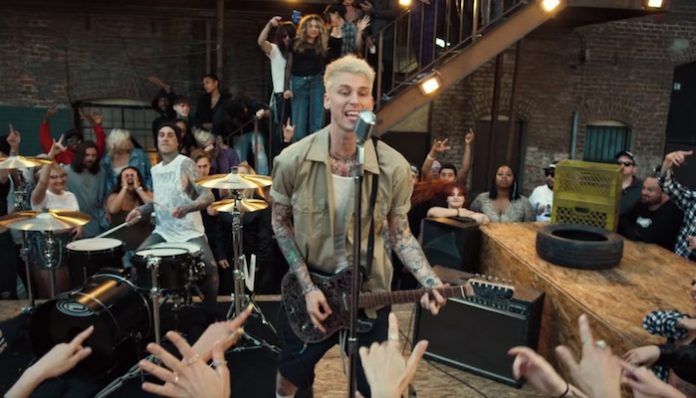 Machine Gun Kelly has been building quite a buzz around his upcoming fourth full-length Hotel Diablo. Most recent single, “I Think I’m Okay,” finally unleashed the much-teased YUNGBLUD and Travis Barker collab on the world.

With a few weeks under its belt, the collab has snagged a new personal record for the rapper on the Billboard rock charts.

The track currently sits at No. 4 on the Hot Rock Songs chart for the week ending June 29, securing the same spot as last week. The trio share the Top 5 with two Panic! At The Disco tracks (“High Hopes,” “Hey Look Ma, I Made It”), Imagine Dragons (“Natural”) and twenty one pilots (“Chlorine”).

The achievement is the highest MGK has peaked on the Hot Rock Songs chart. Previous highest charting tracks include “The Dirt (Est. 1981)” with Mötley Crüe at No. 18 in April and “Alone” with Sleeping With Sirens at No 23 in 2013.

MGK took to socials to share the news with fans, writing, “We have a song on the billboard ROCK chart. 🤯”

we have a song on the billboard ROCK chart. 🤯 https://t.co/07UxtQOKTQ

“I Think I’m Okay” also appears on Rock Digital Song Sales at No. 3 and Rock Streaming Songs at No. 11 for the week ending June 29.

MGK’s highest charting track to date of any genre goes to Camila Cabello collab “Bad Things,” which hit No. 4 on the coveted Hot 100 in 2017.

“10 years later some people still don’t understand this one simple fact: you can’t box me into one genre.”

10 years later some people still don’t understand this one simple fact: you can’t box me into one genre.

Give “I Think I’m Okay” another spin below.

Last week, MGK and YUNGBLUD pulled off an acapella performance of the track before crowdsurfing their way inside for an electric set featuring Barker. A few days later, MGK and YUNGBLUD debuted the track live for the first time together, which followed the rapper’s solo debut ahead of its release at Bunbury.

Machine Gun Kelly surprised fans by bringing out his collaborator at his Denver stop Saturday night. Check out a clip of it below.

Read more: Do you know “I Think I’m Okay” by MGK, YUNGBLUD and Travis Barker?

Prior to “I Think I’m Okay,” MGK dropped “Hollywood Whore,” and teamed back up with “Rap Devil” producer for “el diablo.” Hotel Diablo drops July 5, a date revealed via epic head tattoo.

Machine Gun Kelly kicked off his Hotel Diablo earlier this month, which includes the recently revealed EST Fest lineup. Tickets are on sale now with dates available below. YUNGBLUD and blink-182 also have upcoming gigs with dates here and here respectively.