Director David Ayer shared his thoughts on Jared Leto's 2016 portrayal of Joker on Twitter this week.

Since the David Ayer-directed Suicide Squad was released back in 2016, both fans and critics have been divided over Jared Leto‘s controversial portrayal of Joker. Post-filming, Suicide Squad was recut, eliminating many of Leto’s scenes as the infamous Joker.

Now, Ayer is responding again to those reports that many of Leto’s scenes were cut because the film executives didn’t like his portrayal of Joker.

Following the release of Suicide Squad, it was reported that a Joker spinoff starring Leto had been greenlighted. Leto expressed in the past that he was open to reprising his role as Joker again. However, a year after these reports, the dark and more serious film Joker starring Joaquin Phoenix made its debut. Phoenix went on to win an Academy Award for his portrayal of the DC character and, well, Leto wasn’t too happy about the film.

Back in 2019, it was revealed that Leto had allegedly tried to halt the Todd Phillips production. Leto reportedly felt “alienated and upset” when the film was green-lit and felt that he had been strung along in regards to his role as Joker.

When Birds of Prey, the Harley Quinn spinoff film starring Margot Robbie was announced, there was speculation that Leto could make a cameo as Joker. However, once it was known that Leto did not make an appearance, the speculation about DC and Ayer not liking his portrayal of Joker resurfaced.

In a recent tweet on May 4, Ayer is attempting to put these reports to rest once and for all. A Twitter user reached out to Ayer to ask about the director’s feelings towards Leto’s Joker portrayal in Suicide Squad in comparison to other actors including Ben Affleck‘s Batman in Batman v Superman: Dawn of Justice, Justice League and more.

Read more: Here’s why Creeper are delaying their album until later this year

“Despite how much some DCEU fans love Jared’s Joker, he was too creepy for compassion, and his look didn’t convince everyone like Batfleck did, appearances matter,” shares Twitter user @GokanEkinci. “David, you’re dealing with nerds who dislike Henry’s Superman because he doesn’t wear the trunk, you know that right?”

In response, Ayer shares that he’s in disbelief the controversy surrounding Leto’s Joker is still being talked about. He shares that his “heart breaks” for Leto and also teases that so much of the actor’s work “remains unseen.”

“For sure character creation is a tightrope. I took inspiration from the current DC comics,” Ayer says. “I find it incredible it’s still such a topic 5 years later. My heart breaks for Jared – he did magnificent work. Most of it remains unseen.”

For sure character creation is a tightrope. I took inspiration from the current DC comics. I find it incredible it’s still such a topic 5 years later. My heart breaks for Jared – he did magnificent work. Most of it remains unseen. https://t.co/IRj7vB1ZjG

“No one but me and a few others know all the characters in the movie,” he shares. “But if the Joker isn’t in the film, I don’t think it would be strange. He isn’t a part of the Suicide Squad in the comics.” 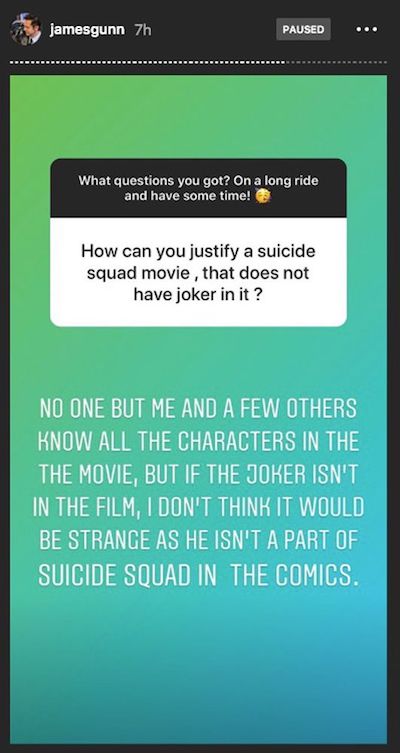 Gunn also shared back in March 2020 that Leto’s portrayal of Joker is not his favorite.

Warner Brothers Studios confirmed that Suicide Squad‘s sequel, The Suicide Squad or Suicide Squad 2, is arriving August 6, 2021. No information on if the current COVID-19 pandemic has impacted the film’s release date has been shared yet. Over the past few weeks, a number of films have had their release dates delayed.

Who is your favorite Joker? Let us know in the comments below!