'Twilight' fans believe the Cullen clan and more could be returning for a new book in the sci-fi series.

It’s hard to believe that the Twilight book series came to an end nearly 12 years ago. In Breaking Dawn, the last book in the fantasy series by Stephenie Meyer, we saw the end of the road for many of our favorite fictional vampires. At least, that’s what we thought.

Now, fans believe Stephenie Meyer is releasing a fifth Twilight book and it could be arriving sooner than we think.

Read more: Electric Century are returning with a new album and graphic novel

Back in 2008, Meyer was working on a fifth Twilight book called Midnight Sun. However, drafts of the book quickly leaked online. In response, she publicly posted 12 chapters for fans and said in a blog post that Midnight Sun would likely remain incompleted. However, in a 2015 interview, the author revealed that she had begun working on the Breaking Dawn follow up again.

Now, it’s speculated that Meyer may have completed Midnight Sun. Fans are convinced the highly-anticipated story of Edward Cullen, Bella Swan and more could be arriving as early as next Monday, May 4.

Although Meyer has not released a statement, her official website is teasing something. There is currently a countdown on the website’s homepage that stops on Monday, May 4. Twilight fans around the globe are convinced Meyer is finally teasing Midnight Sun‘s release. 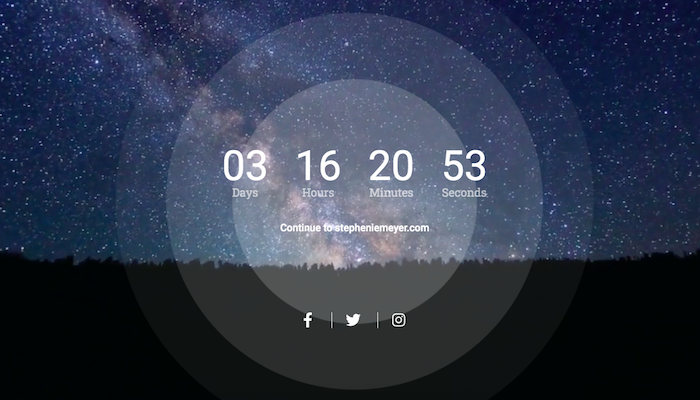 However, it is also speculated that the countdown clock could be for the release of a follow up to Meyer’s The Host series The first sci-fi adventure novel was made into a movie starring Saoirse Ronan (Lady Bird, Little Women) back in 2013. It could also be a countdown for a completely new story from Meyer.

Read more: This social distancing-inspired blink-182 parody works better than it should

Until the clock hits zero, Twilight fans are waiting in anticipation to see what is being announced. In the meantime, they have taken to Twitter to share their thoughts about the rumored release.

TWILIGHT FANS IN THE HOPE MIDNIGHT SUN MIGHT BE BEING RELEASED : pic.twitter.com/UpM6YZ4m6d

My face if Stephenie Meyer’s big announcement is not about Midnight Sun. 4 more days! pic.twitter.com/87McQ6Gm56

IM ABOUT TO CRY???? I MIGHT BE GETTING MIDNIGHT SUN???? pic.twitter.com/SmY9afF35G

Despite the success of the movies, Pattinson has been vocal over the years about what he thinks of the films. Last year, he spoke in an interview about how he still finds the romance between his character and Bella Swan to be a “weird story.”

Nevertheless, Twilight has still managed to stay relevant in pop culture over the past few years. And if these Midnight Sun release rumors are true, diehard fans can head to Washington state and rent out the actual Swan house in Forks to celebrate.

What do you think about the continuation of the Twilight Saga? Let us know in the comments below!