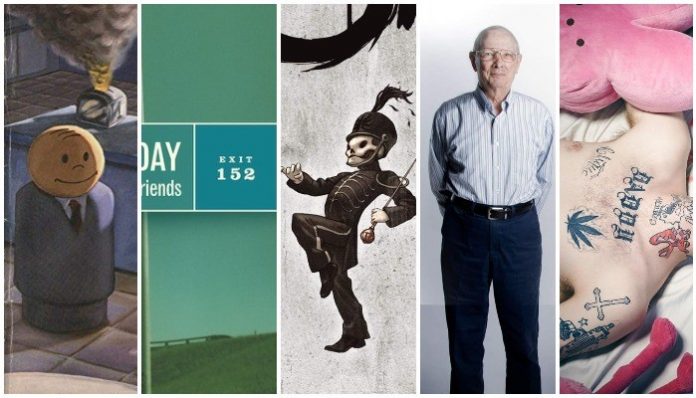 Here at AltPress, we’ve learned a crucial lesson. Mainstream America doesn’t understand that the concept of “emo” is over 30 years old. We know it wasn’t invented in a Hot Topic store. But we also know that the Grammys don’t have a category for “Best Emo Performance By A Duo Or Group With A Minimum Of Three Fascinating Haircuts.” Catch the drift? That’s why we compiled The Big Book Of Emo Album Covers, a selection of record fronts tracing the history and nuances of the genre.

From that classic Rites Of Spring album that started the whole train rolling to the measured introspection of the ’90s (usually just lumped under the term “indie”) to the next generation of listeners embracing the internet (and white belts), it’s apparent that emo as a genre has grown more gracefully than the sonic, focus-group wallpaper corporate radio feeds the country. In the book’s foreword, Jesse Richman writes that “Nobody seems to agree on what emo is,” but he does make the case that “the commitment to elevating the inward remains unbroken.”

Below you’ll find a selection (one album from each year) of micro-reviews from the book to show emo’s evolution. You can read with Spotify open or while you’re slathering beard oil on yourself. You don’t need a coffee table to enjoy AltPress’ The Big Book Of Emo Album Covers. Just the desire to trace back what came before the here and now. You can order a copy right here.

This is where it begins. The Washington, D.C. band were described by many writers as playing “emotional hardcore,” a term later shortened to “emo.” Their only LP was a crucial soundtrack to the D.C. scene’s Revolution Summer, distilling hardcore’s power while drastically changing the form melodically, structurally and psychically. The band hated the e-word tag, yet this rec is absolutely timeless.—Jason Pettigrew

A crucial title in the history of American melodic hardcore, with vocalist Pete Cortner replacing the legendary Dave Smalley. Consider how Cortner’s vocal melody and cadence in the opening track, “The Godfather,” feels like you’ve heard it 100 times already—by all the bands who seemingly lifted it for their own teenage symphonies to sadness in the last 15 years. And the Dag Nasty record in question is 32 years old. [JP]

Taking their place in a post-Nevermind world, this New Jersey trio released two albums that worked the sonic seam of underground punk/post-hardcore and stripped-down alt-rock that would come to define an entire generation. Not many bands in any scene can brag about being covered by both respected die-hard indie fanzines and Vogue. [JP]

Diary is a master’s thesis on the loud-quiet-loud dynamic that helped define grunge while being brutally forthright in lyrical emotion. Featured in both an episode of South Park and an installment of the Guitar Hero franchise, the Sunny Day Real Estate album’s opening track, “Seven,” helped define emo and elevate its pop culture profile.—Bobby Makar

On Jawbreaker’s major-label debut, Blake Schwarzenbach is at the top of his lyrical game, bouncing between youthful optimism and high school outcast angst. The LP comes off like a memoir of an alienated idealist, searching for humor in the near death and true love of every ill-fated relationship. On Dear You, Jawbreaker became sonically refined without filing down any edges. [BM]

Pinkerton abandoned the breezy pop production of Weezer’s debut in favor of grit and isolation with lyrics revealing Rivers Cuomo’s most abrasively autobiographical work to date. Despite its initial commercial failure, the LP eventually found an audience besotted with its gushing-wound candor and solidarity in the feeling that all love is abysmally unrequited. One of the most important emo records of all time. [BM]

The first album from this Texas unit offered a great amount of guitar noise (“Slower”) as well as hefty introspection. This marks a crucial ’90s era release that also spawned outfits such as Christie Front Drive and Garden Variety. If moments of imitation were royalty checks, Mineral would have banks, arenas and airports named after them. [JP]

At The Drive-In’s groundbreaking live act rewrote the book on chaotic performance. And of all of their albums, In/Casino/Out captures best that explosive, frenetic energy. The band spark and spasm like a downed wire, while vocalist Cedric Bixler-Zavala’s gonzo, dadaist ravings point toward half the outfit’s future as art-prog explorers, the Mars Volta.—Jesse Richman

The world may end before a lyric is written that’s more perfectly emo than “My ribs have parted ways/They said, ‘We’re not going to protect this heart you have’” from “You Vandal.” Through Being Cool found Saves The Day embracing pop punk and lacing their lyrics with violent catharsis and teenage sincerity to craft their definitive record. [BM]

The first Dashboard Confessional LP is a momentous tearjerker that’ll make you wonder how many times Chris Carrabba had to sew his mangled heart back together. Soaked in sheer vulnerability and heartfelt candor, the acoustic guitar plays a bigger role—it becomes Carrabba’s emotional counterpart that empathizes his pain and weeps with its listeners intimately.—Marvin Dotiyal

Read more: MCR, FOB or P!ATD lyrics: Can you tell the difference among the emo trinity?

While some argue its place in genre lore, there’s no swerving past the fact that Jimmy Eat World thrust an entire scene to the forefront with this record. Although poppier and soaked in rock influences, Bleed American served as a gateway drug for a generation of sad kids making sad music.—Collin Goeman

2002: Taking Back Sunday – Tell All Your Friends

Nearly two decades have passed since its release, but Taking Back Sunday’s debut is just as timeless as ever. Lines such as “And with my one last gasping breath, I’d apologize for bleeding on your shirt” will go down in the emo history books as a peak example of the tongue-in-cheek lyricism Adam Lazzara spit into his swinging mic.—Rachel Campbell

There’s never a dull moment with Fall Out Boy as the band continue to push the boundaries of expectations and genre confines. While the four-piece you know today are more likely to show up on pop radio, their beginnings are firmly rooted in emo with this incomparable debut. The proof is in their live show where they still close out each set with “Saturday” nearly two decades later. [RC]

In Love And Death finds the Used struggling through an agonizing sense of loss and self-reflection emulated by Bert McCracken’s grungy vocals and maniacal laughter. Each track flawlessly seeks out beauty in the grotesque before the album concludes with a bonus track of an energized cover of Queen’s “Under Pressure” alongside My Chemical Romance frontman Gerard Way.—Paige Owens

As a respected member of the mid-’00s emo trinity, Panic! At The Disco secured their spot with this legendary debut. Taking a page out of the Fall Out Boy playbook with impossibly long track titles, Panic! melded the theatrics of Vaudeville with synth-tinged emotions that definitely got those teen hearts beating faster, faster… [RC]

Read more: My Chemical Romance nods you missed in “A summoning…”

2006: My Chemical Romance – The Black Parade

The Black Parade will carry on forever as the most technically ambitious and thematically magnificent record in all of emo. Unprecedented in the breadth of its theatricality, the album found MCR playing the part of The Black Parade—a band of reapers sent to guide the rock opera’s main character through death in the form of his fondest memory. Told through dramatic lyrical phantasmagoria and enhanced by an eternally iconic visual presentation, this is peak mainstream emo at its most decadent. [BM]

2008: La Dispute – Somewhere At The Bottom Of The River Between Vega And Altair

Cemented in their history as their breakout album, La Dispute’s Somewhere At The Bottom Of The River Between Vega And Altair has stood the test of time. Truthfully, it was bound to become a classic. Their aggressive, spoken-word delivery along with frantic guitar work seemingly awaken every sense while simultaneously offering an implied dark romanticism. [PO]

The Dangerous Summer are the kind of band who make heartache sound charming and whimsical while simultaneously shooting chills down your spine to remind you that life can be an unsettling experience. Reach For The Sun is drenched in uplifting instrumental arrangements and intoxicating lyrics about loneliness that feels like it was written just for you. [PO]

Gaining exposure through Myspace before ever dropping an EP or an album might take the scene king crown, an honor that goes to Christofer Drew, the voice behind Never Shout Never. Upgrading his sugary-sweet, acoustic-bound tracks, Drew’s sophomore effort explored a more expansive production process while still sticking with those diary-entry lyrics. [RC]

Read more: 10 emo songs from 2005 that never left your playlist

Before you slam this book closed in anger, think about what makes a significant emo contribution. twenty one pilots instill the soul of this movement in a completely unprecedented, contemporary existentialist manner over a scope of pop, rave electro, somber balladry (and some moments of rapping), just to put a finer point on it. [CG]

Creeping in with the delicate intimacy of a lullaby, the Hotelier fling into a tantrum by the end of the album’s intro, clobbering listeners with a concussive slew of dark topics. The consistent outcry cuts to the bone, making every listen everything but a dry-eyed ordeal. [CG]

Foxing’s sophomore release twisted the compositional layers of their pensive songwriting by incorporating an orchestral flair to their indie-rock flavor. Tethered to the tranquil tonality of Midwest emo, this album is made resonant by the emotional gravity of heavy lyrical themes, desperately evocative and dynamically diverse in sound. [MD]

The long-awaited follow-up to the cult-obsessed American Football marks a clear but somehow subtle change from their legendary debut. The same sorrow is still present, but age has pushed them to be exact and to the point, marking the growth of a band who are much older and experienced than they once were. [CG]

Beautiful and doomed even before the prophecy fulfilled itself, Lil Peep’s brief discography points a new way forward for the genre, fusing trap beats and languid raps with pop-emo choruses and musical beds heisted from the American Football house. Come Over When You’re Sober, Pt. 1 is even more resonant today than it was in his short lifetime. [JR]

In the streaming age, emo no longer just captures cookie-cutter idea of guitar-driven accounts of everyone who did you wrong. Breaking out from the SoundCloud rap world, Juice WRLD wore his alt and hip-hop influences on his sleeve. His feelings-filled accounts prove that, leading the charge for a whole new emo rap movement. [RC]

The Love Life is as intimate as it gets when it comes to heartbreak and disappointment. Boasting an uncomplicated somberness and uplifting tracks glistening with a haunting glow, Have Mercy frontman Brian Swindle’s lyrics and visceral vocals are a prime example of sweet melancholia and longing that you can’t shake from your bones. [PO]

Don’t take our word for it: Skyler McKee, the man behind Super Whatevr, knows happiness and sadness, and he knows which one he prefers. Which is why he’s changed his life, his music and his attitude on many things. We think this 2020 record might change your attitude, as well. [JP]

Read more: 10 scene and emo songs that got you through your first breakup