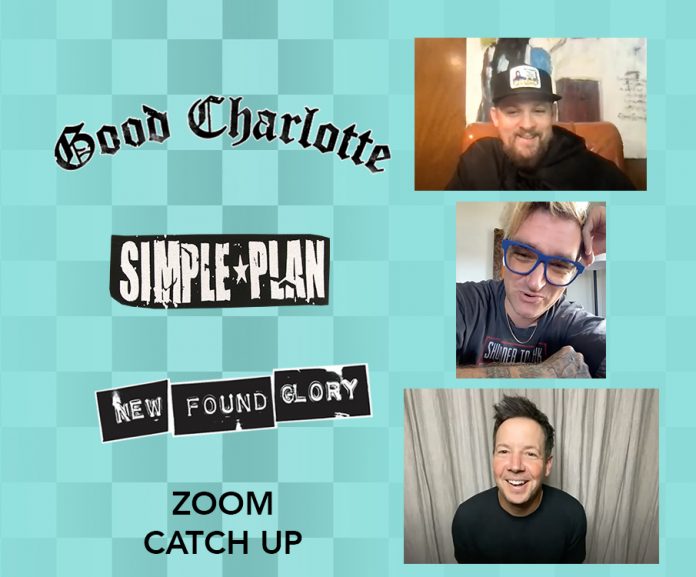 Alternative Press and Live Nation have partnered to offer a special presale in advance of the run, launching May 26. To learn more about the tour, including dates and presale information, visit here.

Read more: Awsten Knight and Joel Madden have a low tolerance for boredom—watch

Like many other live music events, the Pop Punk’s Still Not Dead tour was postponed due to the COVID-19 pandemic. The disruption affected more than just the tour. The run was first announced in February 2020 following the release of New Found Glory’s latest album, Forever And Ever x Infinity. As a result, the group were unable to promote the release via live performances.

During the quarantine, both artists found ways to stay in touch with their fans. Even so, Simple Plan and New Found Glory remained determined to make a return to live performances when it was safe to do so.

Now, the artists have finally announced their rescheduled Pop Punk’s Still Not Dead tour. The two acts will head out with supporting artist LØLØ. Along the way, the groups will visit a number of U.S. cities, including Austin, Seattle, Boston, New York, San Diego, Raleigh, Salt Lake City, Anaheim and Las Vegas.

In preparation for the run, Simple Plan’s Pierre Bouvier and New Found Glory’s Jordan Pundik sat down with Good Charlotte’s Joel Madden for an exclusive interview. The three discussed the upcoming tour, giving listeners a sense of the upcoming run.

More than that, the three artists reflected on their careers in music, as well as the experience of growing older as a musician. They also touched on the surging revival of pop punk, what it would have been like if the trio went to high school together and what to expect from Simple Plan and New Found Glory going forward.

JOEL MADDEN: You guys are going on tour. You had the tour planned before the pandemic?

PIERRE BOUVIER: Yeah. It was actually selling out in a lot of places. It was doing super well. It was a bummer when that happened. We were very excited. Plus, we’ve never really done a big tour with New Found Glory. We’ve played some shows together but never really did a long time together. I was really looking forward to it, and it seemed like it was really well received. When we had to pull the brakes, it was a real bummer, but we’re excited about it. I’m excited that we were able to keep that tour alive and reschedule and do it. And I’m excited about it because I think we all put a lot of effort behind it. It’s going to be awesome.

BOUVIER: I hope so. I think it’s going to be great. I think that people are excited to see shows. I’ve had a few interactions with some fans here and there, and everyone seems very excited about being able to see shows again. Of course, what’s cool for all of us, too, is that there’s, like you were talking before, a revival for pop punk a little bit. You got Machine Gun Kelly and stuff like that, that , I’m assuming, has some inspiration in the pop-punk scene. I think it’s cool for us. It’s crazy how cycles [happen]. They say that they keep coming back, and as you get older, you do realize that, “Oh yes, they do.” You know, whether it’s tie-dye or fluorescent colors or certain styles of music, it really all does come back around. So it’s cool to be part of that. I think the timing of the tour is going to do well with that. And people are just excited. And like I said, we’ve never toured with New Found Glory this extensively. It’s cool for people that grew up in that generation.

Read more: Aly & AJ and Joel Madden take a deep-dive into the the duo’s new record

It’s so interesting to have the span of fans that we have now from very young to very old. Now, what freaks me out—and in a wonderful way—is when I see people that say, “Oh, I grew up on your music because you’re my mom’s favorite band.” I’m like, “What? This is how long we’ve been at this now?” The music came out before you were born, and now you’re like 12, 13, 14 years old and like, “Yeah, my mom used to listen to you when I was a kid, and now I love your music.” I’m like, “Wow. Where did time go?” It’s so weird.

JORDAN PUNDIK: It is weird. It’s so weird because I don’t feel like the band has been around that long. Don’t you feel like time has just…

MADDEN: …Just stood still. Remember when you used to go on tour and in your mind everything at home is frozen? No one’s living, no one’s getting married, no one’s growing up. It’s weird. Age doesn’t hit you the same way when you’re on tour. I still don’t feel like I’m 40. I don’t feel like I turned 40. I don’t know how old you guys are, but I’m not 30.

BOUVIER: Maybe we would have started a super band and we’d be as big as Lady Gaga or [Justin] Bieber or whatever.

MADDEN: I definitely think that you don’t age the same way, though. Maybe it’s a pop-punk band [thing]. I don’t know if it’s just pop punk or if it’s everything, but it definitely feels like you have to remind yourself, “Oh shit. We’ve been a band for 25 years.” Of course, there’s kids whose parents played them our records, and they’re at our shows. So, how long’s the tour?

BOUVIER: It starts Aug. 31, and it ends mid-October. So, it’s got to be like six weeks.

BOUVIER: Just the U.S., no Canada. I think that makes sense right now. We don’t really know how things are going to go with COVID. We’re all crossing our fingers that things will keep going in the right direction. But I think that’s probably one of the big reasons. Just keep it within the country. That way, [it] simplifies things. Because it might be like, you go to Canada, and you’ve got to quarantine.

MADDEN: So what you’re saying is, it’s a “Simple Plan.”

MADDEN: What about music? Are you guys gearing up?

BOUVIER: Well, we have new material that we’ve been sitting on for a while. We’re, I think, preparing to figure out how to release it. So with everything that happened, we had a new record that was getting ready [to] release before the pandemic. We put the brakes on that just because we didn’t know if it would be worth it, not being able to tour on it and that kind of stuff. Now, I think we’re trying to figure out how we want to release it. Do we want to do a few songs and a few songs and a few songs or a whole record? But yeah, we have new stuff that I’m super excited about. We’ve had some of these songs for over a year, a year-and-a-half. I’m excited. They still sound fresh. We did some stuff with Zakk [Cervini]. We did some stuff that I produced. We got our guy, JVP, who was an engineer on our fourth album that he co-produced with me. I’m excited about the new stuff. What about you guys, Jordan? You guys had some stuff. You’ve been releasing some stuff, right?

PUNDIK: Yeah, we had the album that came out right before COVID happened. For us, we put out a record, and we usually tour crazy off of it, you know? It’s been really weird. I think we’re going to obviously try and push out a deluxe edition with new artwork. We recorded five new songs to add to it and have that for the tour.

BOUVIER: I’m thinking that we’re going to have new music out for the tour as well, but I’m not 100% sure. I think at that point, we’ve got to be putting out some stuff that we’ve been sitting on. I’m excited for people to hear it, so it’s good. It’s like, we’ve always felt true to what we sound like, and pop punk runs through my veins, as I’m sure for you guys as well. Our stuff sounds like old-school Simple Plan but [with] a modern twist to it. We always have a couple of curveballs. We can’t help ourselves. Simple Plan always likes to put a song on there that the true hardcore fans would be like, “What the fuck is this?” So we’ll see how that turns out.